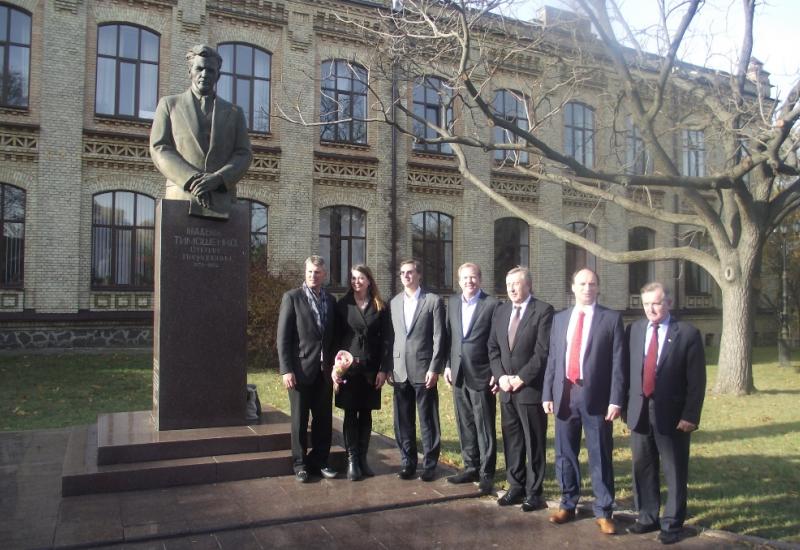 We remind that «Boeing International» is a company-member of “Boeing”corporation (USA) providing international links of one of the biggest and the most popular aerospace technology producers in the world. Today corporation is increasingly cooperating with universities regarding personnel training for its Engineering center that operates in KPI since that year, thus it isn’t the first visit of «Boeing International» executives to NTUU “KPI”.

Apart from traditional visit to KPI campus and exposition of aviation and space department after I. Sikorskyi of state polytechnic museum, guests have also explored the work of World Data Center “Geoinformatics and sustainable development (WDC-Ukraine) that operates in NTUU “KPI”. Rector of university, academician of Ukrainian NAS Mychailo Zgurovskyi and director of WDC Kostiantyn Yefremov spoke thoroughly to the delegation members on the research being done in center and “Foresight economy of Ukraine for medium-term (by 2020) and long-term (by 2030) perspectives” research, in particular.

By the way, research authors defined some potential towards national economy development, which is highly technological engineering with space crafting field being the main constituent, thus the collaboration with KPI in this direction can be of high interest for foreign partners.

It is worthy to note that NTUU “KPI” has its own aerospace program for years 2015-2025. Pro-rector for international relations, correspondent member of Ukrainian NAS Sergii Sydorenko spoke on the program. He also delivered its text copy to Stan Deal.

Guests have also visited educational and scientific laboratory after S. P. Tymoshenko of Mechanical and Engineering Institute and common educational and scientific center of KPI opened last year on the basis of this institute. It is the Center that provides special training for mechanical engineers for their work in aviation industry and it activity was of great interest for USA guests.

And, traditionally, guests took photos at the monument of famous Ukrainian-American scientist, the founder of modern science in the field of aerospace materials and constructions, Stepan Tymoshenko, after whom Engineering center of “Boeing” corporation in Kyiv was given name to.