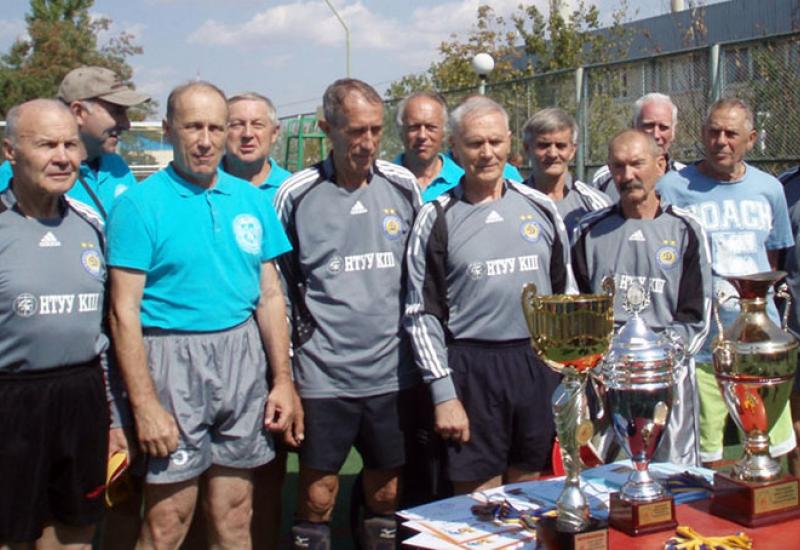 Competitions in frames of  the VI Ukrainian Games of  volleyball veterans and the Ukrainian Cup  2014 among veterans were held in mid-September . In previous years, these competitions were held in Gurzufe and Alushta (Crimea). For obvious reasons this year it had to look for and prepare a new base. That place was the settlement Koblevo (Mykolaiv region.). Volleyball Veterans Association of Ukraine managed to unite the efforts of various organizations, sponsors and others, and in a short time  successfully to carry out the final games.

The run-up preliminaries were carried out in all regions of Ukraine.  Hundreds of teams took part in them. Two teams of "KPI" - "60 +" and "70 +" - have successfully overcome barriers of  selective games and have been admitted to the final competition. It should be noted that most of the teams representing different regions of Ukraine, are in fact a city teams. Some team consists of players of several cities. Our volleyball players have to contend with high-class sports teams, and it  should be noted that the KPI teams set against the opponents  not only their skills, but above all, intelligence and high level of organization.

In a tense struggle the  team "70 +" won the third place prize and the bronze medals. It should be noted that the champion in this category was the team of the city of Kherson, which was  beaten by the KPI team, but won first place on points difference in lost games. Team "60 +" "KPI" in a bitter struggle for the first time made ​​it to the top five teams of Ukraine. In general, the performances of the two teams of the University in 2014, can be regarded as successful.

During the competition, our teams players are introduced numerous fans and participants in the games with the history, the present and the tradition of Kyiv Polytechnic Institute. Many brochures and literature about our university were available during informal meetings . After these meetings, there is a huge rush of positive energy, expanding the circle of acquaintances, contacts, spreading information about our university.

During the competition, we always feel the  help and the care of the management and public organizations of the university. There is a need to say a special thanks  to the trade union committee of employees NTUU"KPI" and personally its chairman V.I.Molchanov for the providing the teams with all necessary things (including a beautiful modern form) for a decent performance in the championship of Ukraine. Staff of the KPI sports complex  (Director R.V.Braginets) do everything to make the excellent conditions for   veterans training there.

The team captain V.A.Eroshenko says: "Despite the difficult political and economic situation in the country, veterans of sports of Ukraine are very active not only in training, but also during the competition. Spectators and participants of the Ukraine Cup will remember spectacular and sports-tense meeting between the teams "KPI 60 +" and " Zviazkivets 60+" ( Kiev), headed by prof. KAI F.Chemerisin. "

Sometime in the past KPI jokingly  was called "Sports Institute with a Politechnic bias." And today, in a students of  KPI  have high vitality, so they are able to do a lot to science, technology and economic development of Ukraine.

It is very well understood by the administration, the trade union and the sports club KPI, which as far as possible provide the necessary conditions for training of volleyball players and other athletes.

By the way, we invite veterans ready to train for volleyball on Mondays and Thursdays from 17:30 to 19:00 at the sports complex of the KPI.