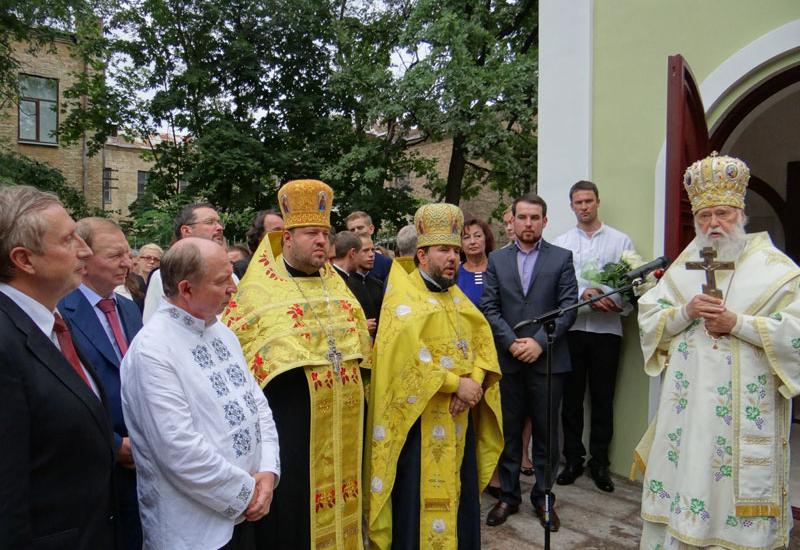 July 23, 2014 The Church of St. Nicholas - heavenly patron of the University was consecrated at the National Technical University of Ukraine "Kyiv Polytechnic Institute".

Should be reminded that Orthodox Church has once existed in the territory of the KPI. It stood not far from the building, which now has the number 35. The Church was consecrated in the name of St. Mary Magdalene and adorned not only the KPI, but the entire Shulyavka - historical area in which the university is located. Therefore, it is sometimes called - Shuliavska church. In 1935 the Communist regime destroyed it, like many other churches of Kyiv. Physics and Mathematics Lyceum № 142 is located now in church's place . Therefore, it was decided to build a new church in another part of the campus. So a new church has appeared close to building number 4, hostels and houses on the street Yangelya.
The new church was consecrated in the name of St. Nicholas. Its construction would not have been possible if not for the charitable help of people's deputy of Ukraine IV, V and VI convocations, president of the Small Academy of Sciences, corresponding member of NAS of Ukraine, Director of the Institute of Telecommunications and Global Information Space NAS of Ukraine Stanislaus Dovgiy. He was the initiator and sponsor of its construction in the KPI.

The consecration ceremony of the Academic interfaith temple was attended by His Holiness Patriarch of Kyiv and all Russia-Ukraine Filaret, Rector of NTUU "KPI" NAS of Ukraine academician Michael Zgurovsky, president of the Small Academy of Sciences, corresponding member of the National Academy of Sciences of Ukraine, Director of the Institute of Telecommunications and Global Information Space NAS of Ukraine Stanislav Dovgiy, second president of Ukraine (1994-2005 years.) Leonid Kuchma, Advisor to the President of Ukraine Mykola Tomenko, clergy of different Christian denominations, known Ukrainian politicians, prominent public figures, leading representatives in the field of culture and arts, staff and students of the university.

The Church of St. Nicholas will be interfaith, as among our students, staff and residents of the surrounding streets there are believers who consider themselves to various Christian denominations. Therefore, people of different areas of the Christian faith will be able to pray here. Priests from different churches in Ukraine will carry out the services. This, according to Patriarch Filaret, will contribute to the unity of Ukrainians, and NTUU "KPI" can be a good platform for that. Such tolerance - the principled position of the University administration that respects the feelings of believers, regardless of their religious affiliation. Therefore, people who believe and people who seek only to Christianity, is able to carry out various religious rites - baptism, wedding, funeral, etc., and just pray. The church is dedicated to the heroes who have given and continue to give their lives for Ukraine.

Sure that a new center of people attraction will appear at the territory of KPI.