Fukushima , Chernobyl: lessons of survival after a disaster 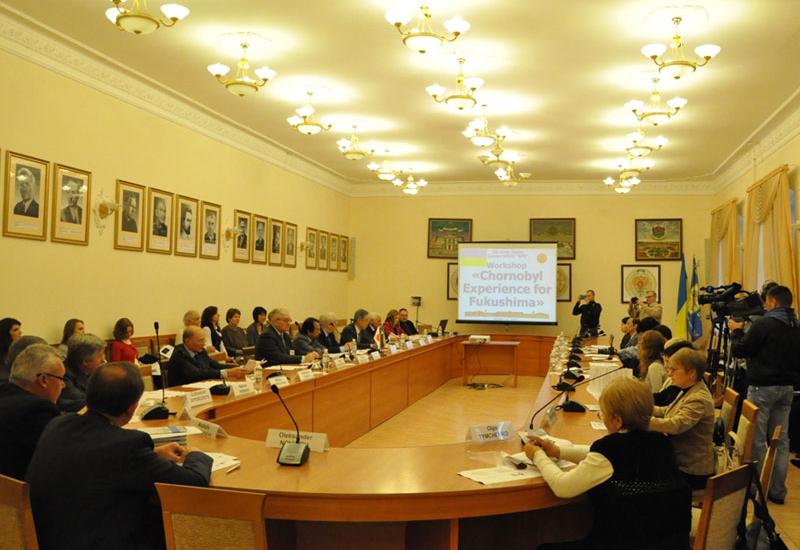 On October,11 at the National Technical University of Ukraine "Kyiv Polytechnic Institute" was held an international seminar on " Fukushima -Chernobyl : Lessons from Chernobyl to Fukushima".

The particularity of the workshop was focusing on the human dimension of nuclear tragedies that befell Ukraine and Japan. The main problems , to which participants of the meeting paid attention were issues of safety, health and legal protection of rights of people in the disaster area or involved in dealing with its consequences. "I am very grateful to the Ukrainian people for their support to my fellow citizens. Two years and seven months have passed since the accident at the nuclear power plant "Fukushima -1" took place, 57 delegations visited Ukraine from our country , aimed at exploring your experience of overcoming the aftermath of the Chernobyl nuclear power plant accident - said at the opening ceremony of the seminar Ambassador Extraordinary and Plenipotentiary of Japan to Ukraine Toichi Sakata . - Studying the experience of Chernobyl, particularly those aspects that relate to health care and assistance to victims, and rehabilitation and reconstruction of areas affected by the accident is very important for our country".

Chaired the seminar, a famous writer and publicist, Doctor of medical sciences, First Minister of the Environment of independent Ukraine, Ambassador Extraordinary and Plenipotentiary of Ukraine Yuriy Shcherbakov . "Destiny linked Ukraine and Japan with nuclear disasters - he said in his opening remarks . - Chernobyl and Fukushima have become a global phenomenon, they are bound to exist indefinitely and put strain on the environment and human health. We ... , Ukrainians , witnesses and participants of the aftermath liquidation, we have to say that the Japanese have friends and share with them our experience and knowledge".

Time has shown that the consequences of the Chernobyl disaster continue to affect many aspects of our life, and work which refers to overcome these consequences continues to this day. Unfortunately, in spite of all the differences in the circumstances of disasters at Chernobyl and Fukusima , there are many similarities in the course of events in time of postaccidential period even in spite of the powerful scientific and technological potential of the country and its highly-organised population. And this refers both to the course of liquidation of aviation and its consequences , and issues of alerting and objective provision of information to the public about the degree of contamination of their habitat and its impact on their health , as well as the possibility of the safe return to their homes , the preventive measures for health protection , giving a help for evacuees and others. So it is clear that Ukrainian experience is really useful for Japan , but all that Ukraine has overcome.

The workshop was attended by: Chairman of the State Agency of Ukraine exclusion zone control Volodymyr Holosha ; The Head of scientific-methodical commission of the Ministry of Education and Science of Ukraine for Civil Security; Director of Environmental Safety Institute Olexandr Zaporogetc; Director of Social Protection of Victims of the Chernobyl disaster and other categories of the Ministry of Social Policy of Ukraine Sergey Podorogeniy ; Deputy of the General Director of the scientific work of the National Museum “Chernobyl” Anna Korolevska; Director of the Institute of Endocrinology and Metabolism, named after V.P.Komisarenko , Professor Nicholas Tronko; The Head of the Laboratory of Genetic Epidemiology of the Hygiene and Medical Ecology Institute O.M.Marzeeva NAMS of Ukraine , MD Professor Olga Timchenko ;The Chairman of the “Save the Ukrainian children from the Chernobyl disaster” Nataliya Preobragenska; The Head of Chernobyl’s disabled people organization “Countryman”; Professor of Tohoku University Dinil Pushpalal(city Sendai , Japan); Professor of the Institute of Development , Aging and Cancer Tohuko University Makabu Fukumoto(city Sendai, Japan); Professor of Medicine Hiroshi Okayama (Japan);scientists and professors of NTUU “KPI” and others.

After opening of the seminar and presentation, where outlines a common set of issues and which disturb the residence affected by disaster at the nuclear power plant "Fukushima-1", and this work continued on the session "Human security and law and "Health problems and other problems as a result of accidents at nuclear power plants".
The reports that participants have discussed, - "Assessment of human security at AES Fukushima"(Dinil Pushpalal, Japan), "The current situation in the towns around the Fukushima Daity nuclear power and research"(Koichi Oyama, Japan), "Technopolis Slavutych - effective means of environmental, economic and social rehabilitation of settlements of radioactive pollution" (Vladimir Udovychenko, Ukraine), "Cancer of the thyroid gland and Endocrinology" (Nicholas Tronko, Ukraine), "The areas contaminated with radionuclides: the possibility of birth defects in newborns and spontaneous women miscarriages" (Olga Timchenko, Ukraine), "The risks for the individual and for the whole population" (Vladimir Pacific, Ukraine), "Using of geochemical barriers to reduce water pollution by radionuclides" (Boris Kornilovych, NTU "KPI") and the others. This seminar was a clear indication that not only the years that have passed since the accident in Pripyat can give serious impetus for solving problems of health protection for peoples living in, injured due to an accident at the plant "Fukushima-1", but that NTUU "KPI" and his Ukrainian-Japanese Center play a significant role in organizing contacts between experts of both countries, first of all, of course, scientific. These contacts, as described in the report during the opening session KPI Vice-Rector for International Relations Sergei Sidorenko, are long-term manner and very useful for Japan and Ukraine. Despite the fact that we live in different countries, but the fate of our people is equal, and it is easier to fight with our difficulties together.