Silent citizens of a ghost town 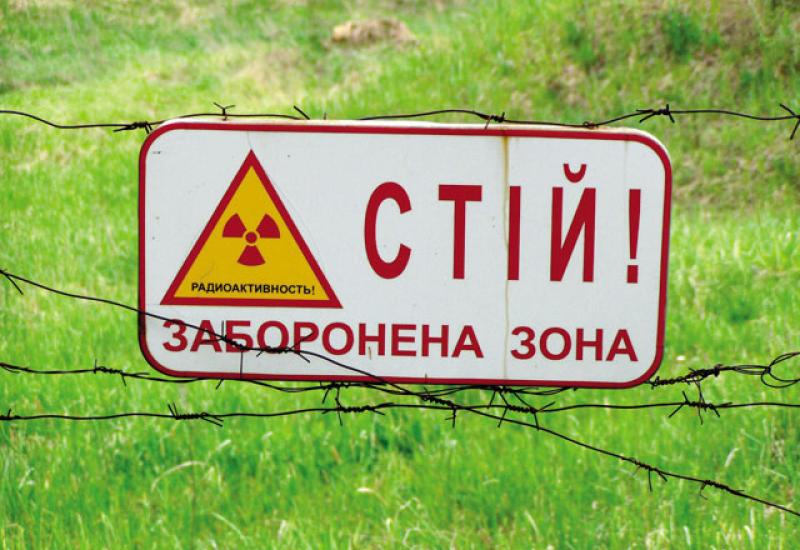 Every year at the end of April many people from all over our planet especially from Ukraine, Belarus and Russia remember those terrible spring days of 1986 when the huge territories with the unique plant and animal life suddenly became bereft of life. And one of the first among them was Pripyat. It is situated 3 kilometers from the Chernobyl nuclear power plant once named after Lenin. It was the city where for every inhabitant was lush rosebush which has recreated  in a common dog bramble with incredibly blood-red berries which contrasted against the backdrop of ominous gray colors and eternal companion of today's town Pripyat – moss that is growing everywhere.

After the authorities once great country had understood the real consequences of the accident at the fourth block of the station, almost fifty thousand inhabitants of Pripyat during the three hours were evacuated from the city. The colony of 1200 buses that moved to the Kiev side was stretched on 15 kilometers. People were taking only necessary staff with them, leaving everything in locked homes: furniture, appliances, clothes, books, pets - cats, dogs, hamsters, canaries...

While they were going they had no idea that many of them will return here in two decades – when the city will be allowed for visiting and only being a part of tour group...

Every time I visit Pripyat I feel as I have used a time machine and returned in 80s years of last decade.

I see a huge sign on the front wall of a high-rise building- «Lenin’s party - People's power, is lead us to the triumph of communism ",

The Lenin and Enthusiasts avenues, Kurchatov and Sport streets, bright yellow phone booth in the central supermarket - automatic machine for sunflower oil sales by 50 cents per third of the liter, changeless for amusement in the park carousel and observation wheel... and at the same time - empty slots in the windows, trees that grow not only directly on the asphalt, but even on the roofs of buildings and premises, and together with these- ominous silence.

There is no living soul in ten-kilometer zone around the station, but here and there we can notice the drawn human figures by unknown authors. They are mostly in the form of faceless shadows, as a reminder of the former inhabitants of Pripyat.

The girl sitting on the ball with uncurling hair on wind is smiling towards a hooligan, who is showing the tongue to someone.  Also we can see a boy, blowing huge soap bubbles. Nearby - happy face of a girl, football fans figures and carefree disco lovers. On the wall in the entrance of a residential building is a girl’s silhouette with mischievous bows, which extends to buttons of forever immovable elevator.

On the tips of the walls in elevator shafts, which situated on the roofs of the buildings is drawn both dynamic and silent boy’s figure. He is playing with a car. Also one we can see here women with full of inconsolable grief faces, that are looking towards the ruined power plant ... A few, forever young and carefree inhabitants of a dead city, ghost town, where time has stopped and reigns radiation.

Since the childhood we have been familiar to the phrase «We should not expect favors from nature, take it - it's our job," "A human is a king of nature" and many others phrase from time to time make us think: Is it true? In consequence when we are remembering the terrible consequences of disasters and accidents at the Chernobyl nuclear power plant, Sayano-Shushenskaya hydroelectric power station and some other man-made objects, we begin thinking about the fragile world around, where we are only guests. 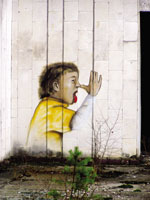 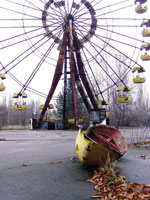 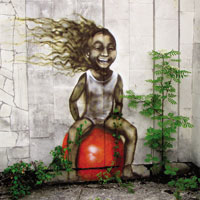 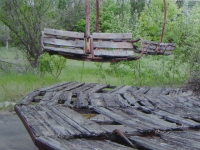 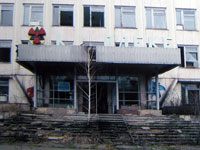 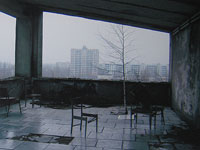 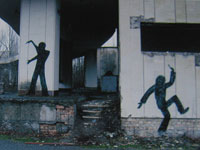