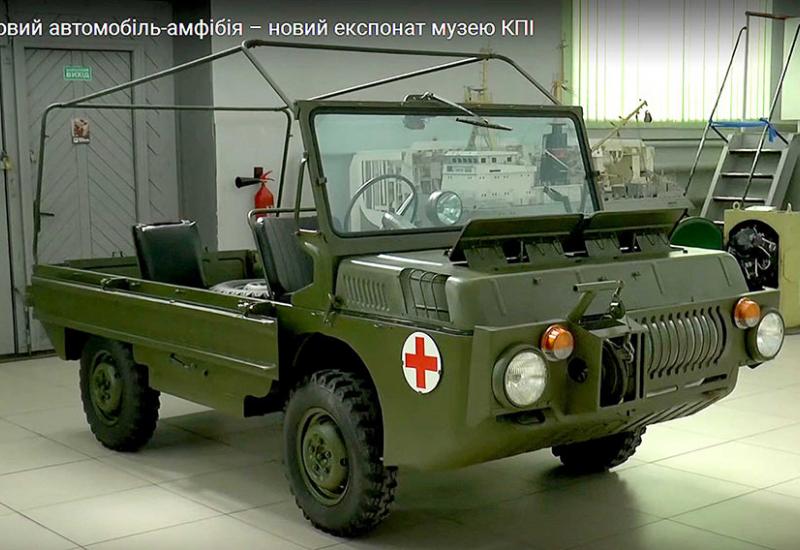 He told our correspondent what this museum works on, about ЛуАЗ automobiles and the story of this particular amphibian, which now is an exhibit at State Polytechnic Museum: “Our museum exists since 2012 and we maintain the objects which are historically valuable. As well as we do restorations, organize exhibitions, fests and events of different kinds. Our partnership with State Polytechnic Museum at Igor Sikorsky Kyiv Polytechnic Institute has been established several years ago, while this year we have strengthened it by an agreement, according to which the amphibian was donated.

Why this exact automobile? I would like to make short inquiry. ЛуАЗ-967М is a front line transporter, all-wheel drive amphibian vehicle, which was created and was being manufactured between years 1975-1989 at Lutsk Automobile Factory to the order of the Ministry of Defense of the USSR. In general, about 20 thousand of automobiles were produced. While nowadays, I guess, only a few decades of automobiles remain in use. The main functions of this automobile are the evacuation of the injured from the front lines, transporting of the weaponry and performance of intelligence tasks (it has extremely low shadowgraph and it is maximally pressed to the earth).

Nataliya Pysarevka, the director of State Polytechnic Institute at Igor Sikorsky Kyiv Polytechnic Institute, asked to donate this exhibit, because the workers of the museum just dreamt of it. Moreover, as it opened, the Head of the Museum Department Hryhoriy Luparenko is an ATO participant, and he witnessed usage of such vehicles on front lines.

Anatoliy Shumskyi told the story of this exact exhibit, which from now is going to be a part of State Polytechnic Museum showroom: “It is manufactured in 1986. I. Y. Svida, the General of the Army, donated this vehicle once. It was used in the Army of Southern Operational Command, especially during military exercise, and at the moment of donation it was worn out completely. The restoration lasted for about 5 years, and I should emphasize the incredible work of our restorer from Odessa Serhiy Atroshchenko.  Over the last three years ЛуАЗ-967М has been used at exhibitions and fests of vintage automobiles.”

In addition, Anatoliy Shumskyi shared the plans of Ukrainian Public Association “Ukrainian Museum of Military History” regarding further partnership with State Polytechnic Museum at Igor Sikorsky Kyiv Polytechnic Institute. As he said, they had an idea of organizing the technical exhibition at the square of State Polytechnic Museum. The technologies which would be shown have been manufactured in Ukraine, but the production of them is now stopped. There are even some ideas of what exhibits to show.

In the end, we would like to add that the search and restoration of automobile antiquity is both a job and a hobby for Anatoliy Shumskyi. While he in fact works for an enterprise of forest industry waste recycling, which he himself established and which he is now leading. This enterprise produces fuel pellets. This issue is up-to-date, it is hard to deny this fact. Anyway, this topic we will discuss next time.