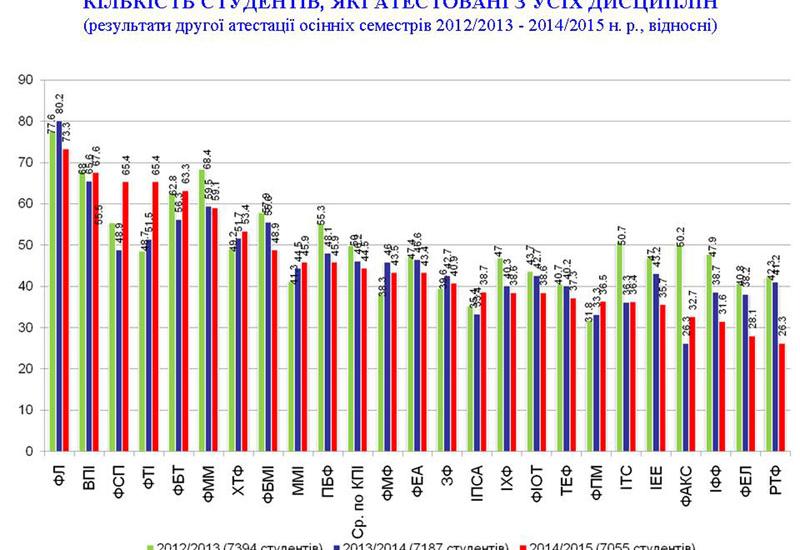 Held from 24 to 30 November 2014 second certification of the autumn semester was the last large-scale control measures before the session, which involved 15850 (excluding ISCIS) students at 1.27% (279 people) more than during the same period in school year.

The share of students unattested in all disciplines, 0.6% as in the past academic year, remains stable. The number of students in all disciplines unattested, on both attestation is 34 people. The largest number of students studying at the IESEM, FE - 5 persons,IME, FCE - 4 persons FW - 3 persons. Traditionally, the most number of unverified students from all disciplines is at the first year (20 persons) and the second year (9 persons). The best faculties on indicators on both neatestatsiy certification in three or more disciplines were IPP and IASA, which have the least unverified students (8 and 6 people respectively, or 1%). The worst appeared in number - FE (186) FICT (110 people), FHPE (106) and as a percentage - FE (17.7%), FRE (12.2%), FASS (11%), FPE (10.9%). It should be noted that in such units as FASS, FMM, FIDE, FSL, FL, IPT, FHPE, ISITS, FBE no students unverified all disciplines.

Total number of students unattested of three or more subjects, according the results of the two appraisals is slightly higher than last year, but that does not mean that the success of students decreased. Too complicated socio-political situation has caused somewhat ambiguous attitude of students to the educational discipline.

In general, the certification was successful and will allow teachers to assess student objectively during the exam (test) in the discipline.

A more detailed report is posted on the website DEW.