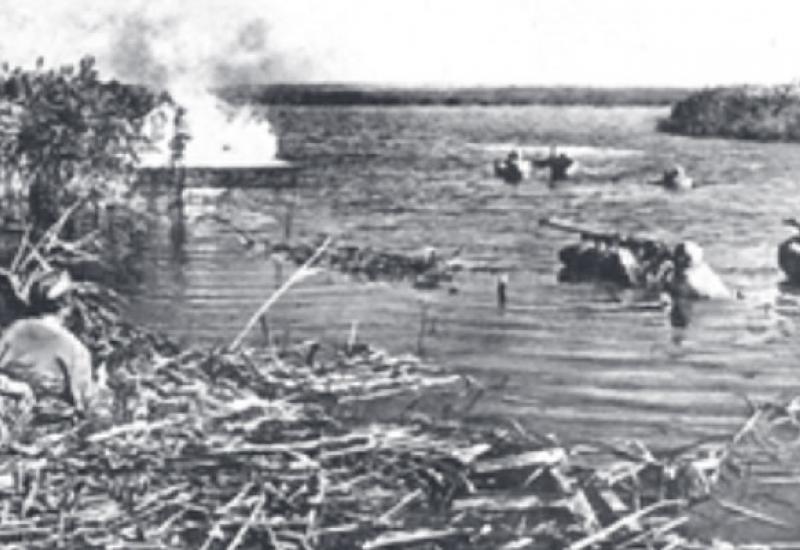 Participant liberation of Kyiv, a former lecturer of physics in KPI,  retired Major, Associate Candidate of Sciences Mikhail Velichko mentions battles on Bukrin foothold, in which he was.

... I will never forget crossing of the Dnipro. Continuous rains, bad roads, without vehicles the transitions was complicated to us, but we did not stop our movement forward on the Dnipro to the foothold Bukrin and liberation of Kyiv from Nazi invaders in the military unit 161 Infantry Division ...

Right of us began forcing other parts of the Dnipro near the village Khodoriv. Throughout the night of September 23, 1943 the work was in full swing, collecting means for crossing. We took everything that could float: barrels, boards, woodblock, doors, etc., from them prepared rafts and ferries. But just before dawn it was used for forcing of the Dnipro. As always, ahead were brave scouts. Pitch darkness conceal our shores. The scouts quietly lowered the boats on the water and sailed to the right bank. Although it was not heard no shots, no human dialects on the opposite shore, and stress of soldiers became critical ...

When the boats were already on the approaches to the coast, on the scouts suddenly rushed a barrage of machine-gun-fire. Perhaps hostile observers notched them. But later, when to the coast remained a few meters, and because the coast was too high, almost vertical, the ball flew above them.

The scouts acted well-handled and quickly. In addition, it happened that to help a combat  protection of the Nazis any enemy soldier was not appeared. Fortifying on the ashore the scouts improved the conditions of crossing of the main forces of our battalion.

In the meantime we organized approached to the bank of the Dnipro and started crossing on rafts, boats and ferries. On the opposite bank of the impetuous cliffs along its chosen under extreme pressure with some incident. Especially difficult was to climb the coastal heights. While I instructed to command a platoon of machine-gun company.

To the left of us, which continued forcing our neighbors, gun shots was heard, howled loudly mortars, artillery rang. This blended in frenetic roar. Our guns beat near about the Dnipro. The shelling began as a surprise, so quickly and stopped. And on our plot, somewhere in the region of small Bukryn, took the first rocket of the Nazis, she flew high, brightly lighted in the dark sky and slowly dropped on the shore of the Dnipro, behind her the second, the third flew up. Soon there was a whole swarm. Heard short bursts of machine guns and slot-machine. Later, the rate of fire began to grow, it was made stronger and stronger. Trails fire as tape, stretch of the Dnipro, strengthened their a new fire weapons - on shore and in the river shells and mines were bursting. The water in the river spumed and bubbled like a boiling water.

We meanwhile by fire from machine guns, assault rifles, hand grenades and punched our way forward. At altitudes of Bukrynsk coast fierce battle erupted. Up to meet us the enemy infantry came out and began to counterattack us. Of course, our soldiers and machine gunners sent an avalanche of lead and metal on the enemy. Especially difficult were the gunners, when the enemy tried to suppress our machine gun by mines.

And this partly succeeded to him. Although our ranks decreased, we suffered heavy losses, but in fierce battle took first trench of the enemy. In this fight is particularly distinguished machine gunners Konovalenko, Kramarenko and Chubarych. Three heroes, firing on the move, rushed forward. Junior lieutenants Ivenkov and Komarov, managing small groups of paratroopers, strongly piled against the enemy. The fighters was inspired by the courage of commanders, they beat the enemy mercilessly.

In the difficult moments they were with us. Mie by mine was sent by gunners of Presnyakov to the enemy, their mines hitted exactly on target, destroying enemy soldiers and their firing points. Mortar helped us to get close to the enemy.

We threw his trenches by grenades, went into the attack and seized the beneficial height for us in the direction of the village Zarubyntsi. Later Ivan Presnyakov awarded the title of Hero of the Soviet Union.

In this day the further advance was stopped because the enemy aircraft began to bomb the crossing ...

Lined up at the front, dropping to three hundred meters and below, the enemy planes passed over our heads, watering the land and people of leaden rain.

No sooner had the planes to disappear like our defense was opened artillery and mortar fire to high density.

Shells and mines exploded everywhere, pressing us to the ground.

Meanwhile came the reserves of the Nazis.

Again had a heated battle in which we opened fire from all weapons.

We withstood three counterattacks, the scouts, who returned with Bukrina, we began to help.

The next day the enemy, reordering his forces, again attacked us from the right flank, where entrenched fighters second Lieutenant Ikonnikova.

In this battle, he and his Deputy were seriously injured, but the soldiers did not retreat.

Appropriate assistance to us and the divisional artillery from the left Bank of the Dnieper.

A whole avalanche of howling shells flew over our heads towards the enemy, after a short time the Nazis came the explosions, the Nazis began to fuss.

The courage and dedication of the soldiers and commanders of our battalions helped finally pushed the Nazis to Tikhomirov.

But the enemy was not asleep.

He organized a tank attack.

The Nazis managed to break into the front line of defense.

The fight entered the fighters of a platoon of antitank rifles, three enemy tanks were hit, and others, without success, was stopped guns anti-tank battalion, which had hit another car.

However, intact tanks at full speed and broke on our cutting edge.

In this difficult situation with courage and resourcefulness was shown by Sergeant Michael Shovkunenko, who later was one of the first in the division was awarded the order of Glory of the third degree.

In this critical time before the fight involved all who have already crossed to the right Bank, who could hold a weapon.

Was used all the reserves, even a training company division.

The enemy infantry caught up with their tanks, made a strong jump forward, but she was immediately overwhelmed by the barrage of our artillery fire.

Enemy ranks quickly thinned out and lay down.

However, from time to time they rose and ran forward.

The distance was reduced.

When the fascists again rushed forward, appeared in front of them a wall of tears.

It was a barrage of the divisional artillery from the opposite Bank of the Dnieper.

The enemy infantry attack petered out.

In front of us German troops had strengthened all kinds of weapons: cannons, mortars, other deadly means.

The sky is constantly circling the enemy, threatening to destroy anyone who tries to get across the river.

The German command continued to reinforce its reserves, pulling back all new divisions from other sectors.

Crossing to the right Bank of the Dnieper, the Nazis destroyed all the ferries and bridges.

The Dnieper river in the area from Rzhyshchiv to Cherkasy has a broad floodplain from one to one and a half kilometers, rugged lakes.

The riverbed crumpled, divided into sleeves that create a large number of islets with shoal.

Right Bank steep, steep, in some places a height of 80 m, and in Hryhorivka almost up to 150 m.

All of this enabled the Nazis to organize a solid defense-and-see approach of our troops to the Dnieper. The area is deeply indented with ravines to a depth of 40 MTA valleys with steep cliffs. This feature of the terrain the enemy used, creating artificial barriers.

In all this made it impossible to maneuver and to use the movable equipment, especially tanks, impairs the operation of the other arms.

On the right Bank the Germans had an extensive network of roads and this gave the opportunity hidden to maneuver their troops and equipment.

Our troops in its path had a water barrier and were in sight of the Nazis.

Funds for the crossing, as already mentioned, we were not so advanced and intelligence units began to cross the Dnieper at night on September 22, on improvised means and fishing boats.

Came the night of September 23, when a massive crossing of the Dnieper main forces units and formations, in separate groups and battalions.

In our 161st infantry division created assault group of soldiers entered a rifle company under the command of Lieutenant N.. Venkova. It is on two makeshift rafts and three boats first went to the right Bank of the Dnieper.

The attempts by many other units to cross to the opposite shore ended in failure. The troops who crossed to the right Bank, it was necessary to organize support fire from the opposite Bank.

At dawn, the Nazis organized a desperate effort to sink the Braves in the river. But it did not work.

Artillery and mortars from the left side helped the brave troops in to fight off four attacks. Finally, in difficult conditions was won a small bridgehead, which began to cross the 161st infantry division with artillery, the parts of amplification and infantry, reaching Trakhtemirov. The courage and the courage, resourcefulness and military intelligence soldiers knew no bounds.

By the end of September troops of the 40th army, which included our division, on the right Bank already held four bridgeheads, freed from enemy Great Bukrin and Lukovica and connecting its flanks. The largest of them in the area Bukrinsky bending was Bukrinsky bridgehead, which we, together with the troops of the 3rd guards tank army of General Rybalko recovered from the enemy. This base then has played a major role in the liberation of Kiev and the right-Bank Ukraine.

M. I. Velichko, a veteran of the KPI, a former lecturer in physics