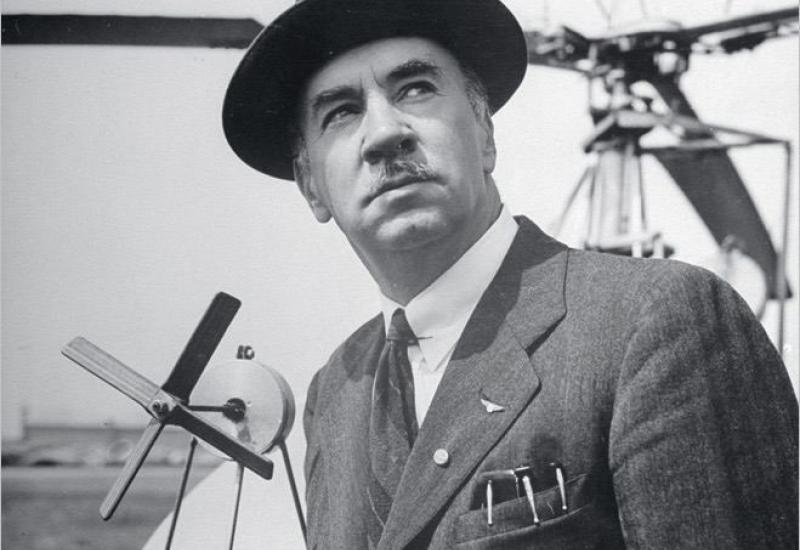 A brilliant engineer, a world-famous aircraft designer, the legendary creator of the helicopter. Descendant of an ancient priestly family, son of a prominent psychiatrist, doctor of medicine, well-known in Europe scientist Ivan Sikorsky.

Igor Sikorsky grew up in an atmosphere of comfort and creativity, rich in knowledge about the world around him, created by his highly educated mother - Mariia Stefanivna.

Aiming to realize his childhood dreams of aircraft, in 1907 Igor entered the Kyiv Polytechnic and took an active part in the helicopter department of the aeronautical section, organized at the mechanical department.

Already in the summer of 1908, student Sikorsky worked on the development and construction of a helicopter. The works were carried out in the yard of the parents' estate and in the KPI air garage. However, the young designer lacks the engine of the required power. In January 1909, Igor went to Paris to learn from French engineers and buy an engine.

In this case, the youngest son was financially and morally supported by his father. A letter of recommendation to one of the most famous aviators at the time, Ferdinand Ferber, was given to Igor by KPI Professor, the author of the designs of the first domestic gliders, Mykola Delone. It was Ferber who became Sikorsky's first flight instructor and advisor in the selection of materials and equipment. After three months in France, Igor returned home with new knowledge and literature, and most importantly, with a 25-horsepower Anzani engine for his helicopter. Thus began a new era of aircraft construction, the founder of which was Igor Sikorsky.

The first attempts to lift the self-constructed helicopter into the air were unsuccessful. However, this experience helped to identify important features that need to be considered in the construction of such devices. For some time, the young designer together with like-minded students Fedir Bylinkin and Vasilii Jordan created aircraft. The first models were BiS-1 and BiS-2. Shortly afterwards, Sikorsky built C-3, C-4, C-5, and C-6 aircraft on his own.

On December 12, 1912, the C-6 broke the world speed record of 111 km / h. In the same year, Igor Sikorsky took the position of chief designer at the aviation department of the Russian-Baltic Carriage Plant in St. Petersburg. During his time, multi-engine airplanes "Grand", "Russian Knight" and four-engine "Ilya Muromets" flew into the sky. The last one was recognized as the best aircraft of the First World War.

Eventually, the war became a turning point in Sikorsky's life. Due to the threat of Bolshevik persecution, he went abroad: first to the former Yugoslavia, then to France, and from there to the United States. There he embodies his aviation plans. Many large corporations were interested in Sikorsky's design talent, and in 1923 he created his own - Sikorsky Aeroengineering Corporation. His flying boats, capable of connecting cities without runways, immediately became very popular. And the four-engine amphibious S-40, which carried 40 passengers for a distance of up to 800 km, and 24 passengers - for 1,500 km, became a legend.

Having succeeded in building aircraft, the designer returned to an old dream - a helciopter. In September 1939, the scientist himself tested an experimental helicopter VS-300 (S-46), and in 1942 his helicopter XR-4 (VS-316) was adopted by the US Army.

World War II proved to be a test that aircraft technician Igor Sikorsky passed with honours. Since then, Sikorsky Aeroengineering Corporation has been a recognized leader not only in the United States but also in the world. Another achievement of the company is the S-55 helicopter, which made its first transatlantic flight in 1952. The last of the helicopters developed personally by Sikorsky in 1954–1955 was the S-58.

Igor Sikorsky passed away at the age of 83 - on October 26, 1972 - as a famous aircraft designer, who was called the father of a helicopter during his lifetime.

Igor Sikorsky is one of the most outstanding students of Kyiv Polytechnic, but KPI also played a crucial role in the life of the aircraft designer. "I take off my hat in front of the alma mater, which prepared me to conquer the sky," Igor Ivanovych said about KPI.

Since 2016, KPI is named after Igor Sikorsky - an outstanding aircraft designer of the 20th century.