Anti-aircraft gun "KS-19" - an exhibit and a monument 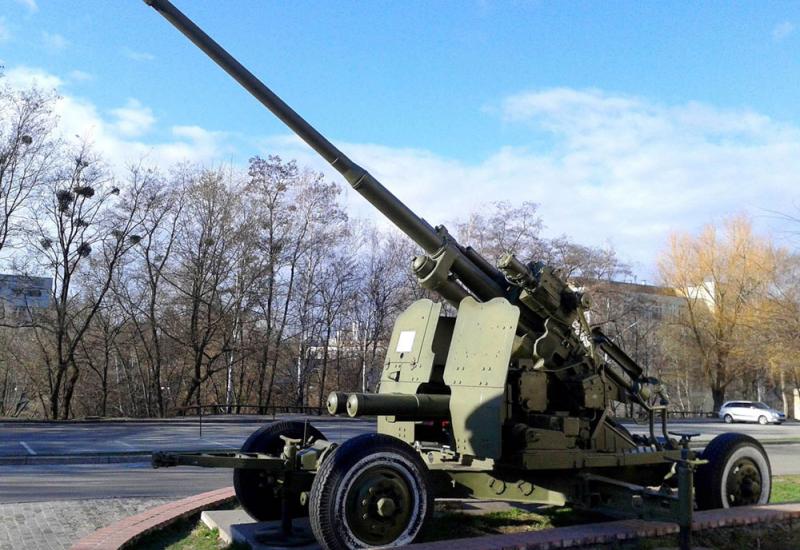 The State Polytechnic Museum exhibits a variety of equipment samples, and among them - a large number of objects that are milestones, important in terms of not only a particular industry, but also technology as a whole. Such examples include the anti-aircraft gun "KS-19", which is installed on the open air at the entrance to the museum on the south side.

Shortly after World War II, the era of jet aircraft began. A significant increase in flight altitude and speed of bombers put an emphasis on the development of means to combat the aircraft of a probable enemy. Due to the low "ceiling" of the target of anti-aircraft guns, the old air defence was virtually powerless against such aircraft. The capabilities of large-calibre trophy guns also did not meet the needs of the time. So it was necessary to create new, "stratospheric" guns.

The task of developing such weapons was given to the Sverdlovsk Machine-Building Plant #8 n.a. Kalinin, the main designer of which was a Kyiv-citizen, a graduate of Igor Sikorsky Kyiv Polytechnic Institute Lev Veniaminovich Lyuliev. The task for developing a new air defence system was completed in a short time, and in 1947 a new 100-mm gun was put to the test, and in 1948 the anti-aircraft artillery complex "KS-19", which was based on this gun, was taken into service.

Calibre of the gun was 100 mm, the weight of the shells, depending on their type, varied from 21.1 to 30.4 kg, the initial flight speed - 900 m / s. The gun mechanized the installation of the detonator, sending the projectile, closing the shutter, shot, opening the shutter and extraction of the shell casing. The gunner just put the projectile on the tray. The rate of fire was 12-15 shots per minute. The total weight of the gun is 9.35 tons. It was towed by a tractor at a speed of up to 35 km / h. A service of 8 people could brought it into combat mode in 7 minutes. The time to hit a probable air target from this anti-aircraft gun ranged from a few seconds to 1.5 minutes - just as long as an enemy aircraft could be in the area of the gun.
According to the prevailing principle at the time, the anti-aircraft gun was developed with the ability to fire on ground targets with a distance of up to 21 km. However, the main purpose of the gun is to hit air targets with a speed of up to 1200 km / h and a flight altitude of up to 15 km.

Rapid changes in the development of aviation equipment have necessitated radical changes in air defence systems. Systems with mechanical drives and optical sights of the Second World War times disappeared. The design of "KS-19" was revolutionary at the time. For altitudes above 10 km and speeds above 500 km / h, the existing mechanical guidance systems were inefficient. Therefore, the means of combat support of the anti-aircraft battery of the complex "KS-19" of eight guns included a radar guidance station SON-4 and an anti-aircraft artillery fire control device PUAZO-7, as well as a gun power station SPO-30, system of hydropower drives, etc. All systems were located at a distance of not more than 100 m from the junction box and were connected to the electric network. SON-4 was a two-axle van with a parabolic antenna with a diameter of 1.8 m The system allowed the use of manual semi-automatic and automatic target tracking modes. Guns were guided to the remote point by hydraulic power drives from PUAZO-7. However, it was possible to aim manually. The detection range of the bomber when flying at an altitude of 4 thousand m was up to 60 km.

From 1948 to 1955, 10,151 KS-19 guns were manufactured. Before the invention of anti-aircraft guided missiles, they were the main means of combating high-altitude targets. The decommissioning of the KS-19 in the armed forces of the former Soviet republics took place gradually until the end of the 1990s. The gun was in service in more than 20 countries. It was used in conflicts in the Middle East (Egypt, Syria), Korea, Vietnam, Afghanistan. There is some evidence of the use of systems in the Gulf conflict of 1990-91. Moreover, a certain number of them are still used in the armed forces of some countries. This is facilitated by the excellent characteristics of these guns and their significant number in warehouses. Moreover, they are modernized. For example, in 2009 100-mm anti-aircraft gun "Saeer” was created in Iran on the basis of "KS-19”. The installation of a loading machine slightly accelerated the rate of fire to 15 shots and minimized the loading time. The gun's control and management systems were also improved using modern electron-optical systems. Of course, the cannon can no longer fight modern aircraft as successfully, but it is effective against helicopters and can be dangerous for unmanned aerial vehicles, which are now widely used by the armies of developed countries. "KS-19" is especially effective in terms of "shot price - target price".

Interestingly, since the second half of last century, this gun is used for completely peaceful purposes also. It is used for forced warning avalanches in the mountains, as well as for the dispersion of hail clouds in areas of highly efficient industrial viticulture. For this purpose, a special projectile was created for it. The projectile contains chemicals that cause precipitation from clouds.

After the "KS-19", Design Bureau under the leadership of Lev Lyuliev developed another anti-aircraft gun to hit high-altitude targets - "KS-30". In terms of operational and tactical and technical indicators, it surpassed all known types of artillery weapons in the world. However, it was released in smaller quantities than "KS-19" - only 738 units, including prototypes. The time of anti-aircraft artillery defence systems was coming to an end, they were replaced by anti-aircraft missile systems.

The 100-mm KS-19 cannon, which stands on the site next to the State Polytechnic Museum, was repaired and demilitarized by the Balaklia Repair Plant after serving in the Soviet Army. It was installed in June 2014. Now it is not only an exhibit that attracts visitors and illustrates one of the types of specific equipment, but also a real monument to the outstanding design engineer Lev Veniaminovich Lyuliev. Therefore, it reminds students of Kyiv Polytechnic of the glorious history of the university and the huge contribution of its students to the development of technology. And, of course, about its author - the outstanding designer Lev Veniaminovich Lyuliev.