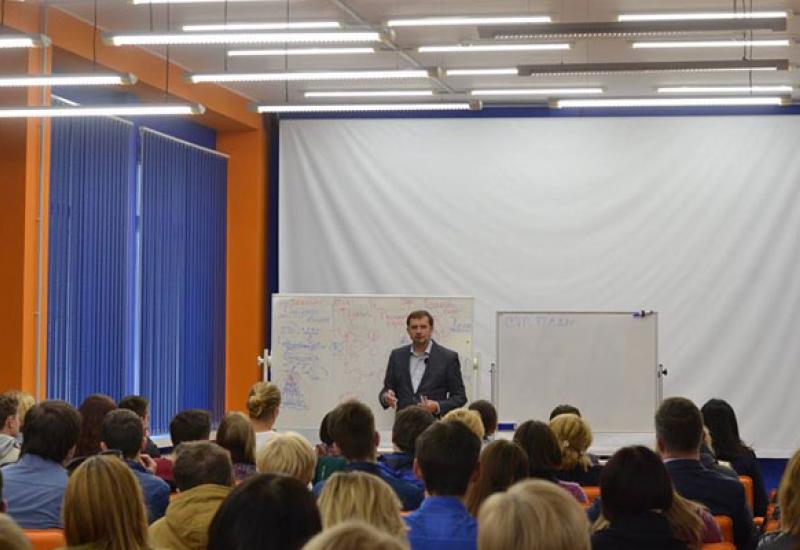 "... The definition of "strategy" and "plan" contradicting each other ... Strategic plan is a pure oxymoron
… a number kills an idea…"

"…Idea can be a composition of different notions, which appears as a holistic image immediately. This, by fact, makes up the core of strategic decisions…"

With these creative statements the "New managerial approaches: strategy, leadership, innovations" lection was commenced by the Dean of the Kyiv-Mohyla Business School (KMBS), Oleksandr Savruk, on May 11th. It took place at the meeting at Belka student space which is located in the Scientific and Technical Library of NTUU “Igor Sikorsky KPI”.
Oleksandr Savruk graduated the Institute of Mechanical Engineering of NTUU "KPI" in 1986. PhD in Economics, he is lecturing at KMBS courses: strategic idea, business-modelling, changes report. He is also an official advisor to the leaders of transformational projects in the field of public administration in Ukraine.

The majority of the audience, who visited the meeting (which is about 80 people), comprises of student,s lecturers, and Igor Sikorsky employees. However, there were also the students of NAU, NaUKMA, KNU, entrepreneurs and librarians.
The disscussion started with an introduction to the logic of different management paradigms and change.

Thus, in the industrial epos, the logic of the closed system and functional hierarchical control was present, when everything worked only by the command of the leader, who was the one to check the results. Managerial logic of 80-х was reactive: outer power reacts on us, and we, in turn, on it. Відповідно й Organizational structures were accordingly reactive. The 90s were marked by the fact that such organizations determined their key competencies and took active subjective position on the market. Their strategies were proactive.

Starting from 2000s, open systems and according managerial logic were to appear: we all are interconnected in the balanced systems with boundaries. Products were being created through the mutual cooperative logic. The product itself was becoming a valuable offer and not only some kind of a material product.

Such logical shifts from enclosed to open system concern not only business, but also any organization and even an army. In the open system, the main place takes an idea while the manager’s task is to help each and every within the organization to encover their “I”, find their place.

The relationship between a management paradigm and art, from realism to impressionism and to abstract art, was presented in an interesting way.

Speaking about the education and about the ways of how the education bring to life "strategic architectors", who are able to create and grow the open systems, the accent was placed on the qualities of leaders, who are after creation of their own system-game rules.

Managers, in the future (with the development of artificial intelligence), will have to build the relationships not only between people. In order to create a to create a viable system, it is important to have a high emotional intelligence (EQ), because only a high IQ will not be enough.

Enclosing the logic of modern managing through the key questions – Who? For what? What? How? – Olexandr pictured their interconnection with the education. The people, who are gaining skills, are good performers, who know for sure "how?" and know how to make it work. The people, who are gaining their competencies, able to work with "what?". Only those, who are being educated to read between the lines, able to answer the question "for what?"

Summing up, a lot of questions that all worth our attention were raised at the meeting. Each of the presenters had the opportunity to put everything heard on their own context and draw conclusions.

Oksana Bruy, Director of the Scientific and Technical Library named after. GI Denisenko