Georgy Grigorovich Efimenko: life in the name of education and science. The 100th anniversary of the birth 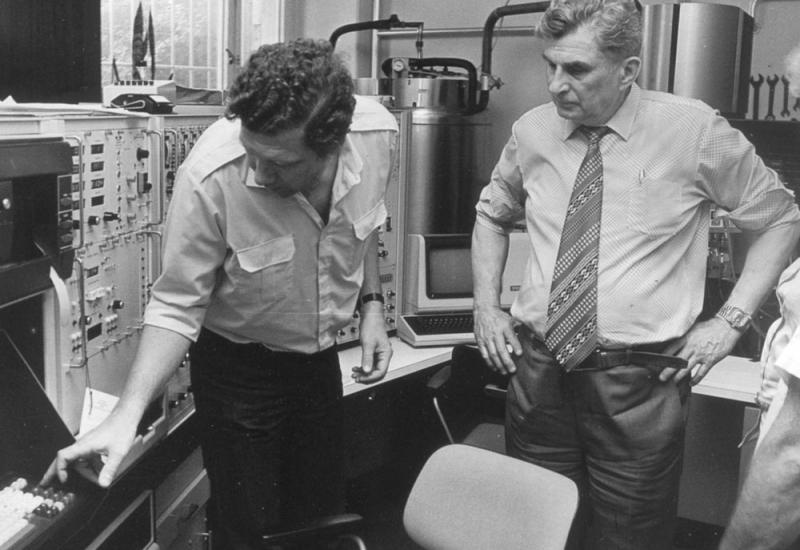 2017 marks 100 years since the birth of the outstanding scientist, teacher and organizer of education in Ukraine George G. Yefimenko.

G.G. Efimenko was born on January 30 in 1917 in Katerinoslav (now Dnipro). After graduation in 1931 he went to the workschool schools Metallurgical plant named after. Petrovskiy, after finishing the school in 1933 he worked as an electrician at the same factory. In 1935 he entered the Iron and Steel Institute in Dnipropetrovsk, which he graduated from in 1940 in the field of "Ironmaking" specialization and received direction to work on metallurgical plant in Kryvyi Rih. However, severe prewar period brought its own changes to his plans.

Two weeks after defending his diploma project he was already in Western Ukraine as a soldier of training pack. In February of 1941 he was sent to the Politico-military courses of Kiev Special Military District in Radomyshl, and on the third day of the war - to Kyiv, where he was appointed as Battery Commander of the political anti-aircraft artillery regiment which defended Kyiv. In February of 1943, he was assigned as an assistant chief of the political department in the 8th antiaircraft artillery division. Georgy Grygorovich participated in major operations in the Kursk, crossing the Dnieper, the liberation of Kyiv and Ukraine, crossing the Vistula, where began the famous Vistula-Oder Offensive exit to the Oder in February-March 1945, and in April - attack on Berlin and its assault.

In 1955 - 1959 G.G. Efimenko - Deputy Minister of the newly organized Ministry of Education of the higher education of USSR, which advanced education was attached to as well. It was a time of rapid development and higher education institutions, caused by rapid economic growth of the USSR and the increased need for specialists. Then, on the initiative and with the active participation G.G. Efimenko, there were organized Alchevsk Mining and Metallurgical Institute, branches of large institutions in Kadiyivtsi, Zaporizhia, Rubezhnoye, Simferopol, Nikopol, Kriviy Rih, Vinnitsa and other cities of Ukraine. Subsequently, these branches become first-class universities. All this time, he concurrently works at the department of metallurgy of cast iron and the theory of metallurgical processes of Kyiv Polytechnic Institute.

In 1959 Georgy Grigorovich Efimenko started working as associate professor in the department of metallurgy of cast iron of Dnepropetrovsk Metallurgical Institute, where organized the only existent in the USSR basic research laboratory of preparation of metallurgical raw materials. Basing on works performed in the laboratory in 1971 he defended doctoral thesis at the Moscow Institute of Steel and Alloys. Since 1970 he worked as rector of Dnipropetrovsk Steel Institute.

Scientific research projects of G.G. Efimenko were focused on solving the main problems of preparation of metallurgical raw materials, its use in metallurgical units and management of domain process. His research led to the creation of the first in the world industrial-automatic regulation of domain processes at the plants "Krivorozhstal" and Mariupol plant named after Illich. The wide front of research in the basic research laboratory of preparation of metallurgical raw materials allowed to significantly deepen and expand the physical and chemical bases of iron ore sintering materials.

G.G. Efimenko together with laboratory fellow-workers developed the theory of sintering sinter and pellets present in the liquid phase, identified patterns of crystallization of the liquid phase, showed the importance of surface properties of the liquid phase and magnesite additives for blast furnace process performance and product quality. In the 1966-1970 there were also developed proposals for increasing of sinter and pellets strength. They were introduced in mining and beneficiation plant in Krivoiy Rih and gave the economic effect of about 1 million rubles a year. They were also laid in reconstruction projects of agglomerating plants.

After working as rector of Dnipropetrovsk Metallurgical Institute begins the second, more productive period of G.G. Efimenko, which accounts for 1973 - 1984, where he served as Minister of Higher and Secondary Special Education of the USSR.

As Minister G. Efimenko did a lot for the development of higher education in Ukraine, raising the level of training highly qualified specialists and their effective use.

Working for this post, Georgy Grigorovich did not break relations with Kiev Polytechnic Institute - he led the methodological seminar of professors of the Faculty of Engineering and Physical and was its active member. This activity has enabled G.G. Efimenko to generously share with staff and students of invaluable experience in steel production, to encourage students to master fundamental knowledge.

G.G. Efimenko initiated the establishment in 1985 of scientific-research laboratory of new methods of training materials for metallurgical engineering and the physics department of Kyiv Polytechnic Institute at the Department "Physical-chemical bases of technology metals." He became its first supervisor. In 1988 the laboratory was converted into facultywide "Research laboratory of new processes and technologies in the industry."

As supervisor of laboratory Georgy Grigorovich created the main activities of the laboratory:

1. Theoretical and laboratory of researching promising new methods of preparation of iron ore for the steel industry;

2. Synthesis and analysis of international practice concerning the preparation of new metallurgical processes;

5. Study the economic aspects of the steel industry in the post-Soviet Ukraine and the development of scientific bases and strategy of highly technological structure of steel Ukraine.

Relevance of the research laboratory was conditioned to the fact that the charge materials of Ukrainian production by their characteristics inferior to European ones. So in this laboratory took place main strategic directions and prospects of scientific and technological development of the steel industry, developed proposals for scientific, technical and organizational solutions in terms of Ukraine. G.G. Efimenko made a significant contribution to the development of theoretical bases and technology of highly efficient types of metallurgical charge. Under his leadership, grew a constellation of brilliant scientists - more than 50 doctors and candidates of sciences and scientific school field of study of charge materials for metallurgical technologies. He is the author of over 200 scientific papers, including 60 inventions.

With the direct participation of Georgy Grigorovich there were prepared and published textbooks for universities "Ironmaking", "Steel at the turn of the century", the monograph "Steel and alternative materials", "Analysis of the technical and economic problems of progress in steel production in the world."

For G.G. Yefimenko as manager there was a typical active use of innovative analogical approaches based on deep analysis of processes, the development of modern technology management, which he considered to be creative research work, giving special importance to the development of methods and approaches  in universities - at all levels, the spreading of the best practices through collections of articles on the problems of higher education.

In May 1974 the Ministry developed the only uniform requirements for scientific organization, planning and periodic monitoring of students' independent work, which were used in all the universities of the 1974/75 academic year. This created the necessary prerequisites for the semester control of students' independent work, implemented in all universities from September 1, 1974. This assumed foreseeing of the only term results of current control in the form of certification of each student in all disciplines. Current control and certification allowed students and staff to more manage your time more efficiently, identify problem of supreme importance and, ultimately, contribute to the quality of knowledge. To automate procedures analyzing these and other processes in the ministry was created Chief Information Centre.

G.G. Efimenko gave active research work of students, the transformation of scientific approaches in the form studying with the great value. After extensive public discussion and careful preparation of scientific and technical documentation from the beginning of 1975/76 academic year, universities were offered an organizational system of research students in the training process, which included the following measures:

- inclusion in the curricula of all university course "scientific research", preparation and publication of appropriate teaching documents, manuals, textbooks. Applications for this course were developed by profile (issue) university departments inclusive of specific of the department and relevant scientific institutions operation. It should be noted that this course now exists in many institutions of higher education;

- inclusion in the curricula of the minimum number of hours (140 to 200) for the research work of students in the learning hours for studying general subjects, basic and specialized courses of study when performing laboratory projects and dissertations, tutorials, real design in the period of educational and production practices, research practices on the topics of the thesis etc.

Too centralized system of higher education in the country hampered the creativity and often made it impossible to put into the effect even these require innovations. But today we can say that many ideas of G.G. Efimenko, perhaps in somewhat different forms, but still were realized. It is, for example, the idea to create the National Research Institute of High School (now - Institute modernize the content of education MES of Ukraine); Museum of Machinery History, analogue to which created under the National Technical University of Ukraine "Igor Sikorsky Kyiv Polytechnic Institute"; the introduction of the State Prize in the field of education; creation of multi education systems using base specialized secondary schools at that time there were about 730 of those); the introduction of a wide quantified analysis assessment. Now this idea is implemented as a practice of external evaluation of universities, generally using of elements of the Bologna process in the sense that, as the inscription on the walls of the University of Bologna, "Without science there is no university," and more. All this gives reason to believe that the idea of G.G.Efimenko is relevant today and is successfully implemented in modern Ukraine.

In his activity G.G. Efimenko attached extremely great value to work with people of a new generation of leaders. It should be noted that under his leadership such prominent leaders of higher education institutions as of NAS of Ukraine as rectors: L.V. Hubersky from Kyiv National University named after T. Shevchenko, M.Z.Zgurovsky from National Technical University of Ukraine "Igor Sikorsky KPI”, G.G. Pivnyak National Mining University and many others began its work.

G.G. Efimenko was a deputy of the Supreme Soviet and the Supreme Soviet of the Ukrainian SSR (1974 - 1985 years.). The winner of the State Prize of the USSR (1983), was awarded with the Order of Lenin, Order of the October Revolution, Order Red Star,
The Order of The Patriotic War of the 2-nd Class, Order of the Red Banner of Labor, medals "For the liberation of Warsaw", "For the capture of Berlin", "For Victory over Germany", "For valiant labor", "50 years of the USSR Armed forces", "20 years of Victory in the Great Patriotic war 1941 - 1945".

The activities of corresponding member of Ukrainian NAS, of Professor and Doctor of Technical Sciences Georgy Gregorovich Efimenko, who passed the crucible of World War II and all stages of research and educational work in higher education, harmoniously combined demands with respect and trust for subordinates and colleagues, he was characterized by high culture of communication.