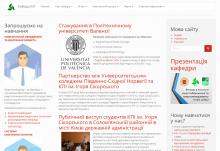 In independent Ukraine power supply department took an active part in the creation of national standards of Ukraine. Education and training in the field of energy efficiency began established in Ukraine in 1997 (the first time in the post). The Institute for Energy Saving and Energy Management Igor Sikorsky Kyiv Politechnic Institute was created , which according to the Cabinet of Ministers of Ukraine and the relevant Ministries orders is the basic organization in Ukraine in this sphere on education, training, skills development and promotion of knowledge. In the same year a new specialty "Energy management" was created, according to which since 2003 began production of bachelors, masters and specialists in 12 technical universities of Ukraine.

Today the department of power supply of Igor Sikorsky Kyiv Politechnic Institute is leading in preparation of professionals in the field "electrical power system" (until 1995 the name of the specialty - "electricity industry, cities and agriculture") and "Energy Management". The department was the initiator and founder from 1997 specialty "Energy Management" in the Ukraine.

Throughout the period of the department (from 1949) conducted active research, emerging in a school KPI power enterprises and cities, which is known among scientists and industry experts in the USSR and abroad. Leading scientists (Vynoslavskyy VM Zorin VV Prakhovnik AV Ekel PY and others) formed research teams. A considerable amount of research modes of distribution networks that belong to a class of complex systems with tens of thousands of elements and parameters. A wide range of assessment and mathematical models of optimal solutions to build, develop, control and power management systems. With the possibilities of calculations using computer technology developed best on the territory of the Soviet Union Information and Computing Complex (IEC EPS) systems modeling power and optimize their profiles, with a view to ensuring the quality of the voltage to minimize power losses, increase security of supply by making optimal circuit design and administrative decisions ( Zorin, Nedin , Ekel . Krushelnytskyi ). An important area of ​​research scientists of the department was the creation of automation systems, control, monitoring energy use (Prakhovnik Kalinchyk Voloshko Kotsar ) made widespread adoption of such systems. The results of appreciated State Prize of Ukraine (Prakhovnik Kalinchyk ).

Over the course "Transients in power systems" in 2006 received the State Prize of prof. Vynoslavskyy VM (Posthumously) and doc. Nesen LI and V. Prokopenko

The last two decades made a wide range of research on energy management and energy efficiency technologies, the use of dispersed generation, a new generation of accounting and management controls, active participation of consumers in shaping the optimal regimes of electric power, the creation of an energy audit (Denysyuk Popov , Nahodov Prokopenko )

Educational process and scientific research created by the presence at the Department of Energy Training Centre through the implementation of the project TASIS and Research Institute "Energy".

Thus, the department came to power reform of higher education with a sufficiently high scientific potential, scientific schools, training base and teaching staff, which is distinguished scientists, laureates of the State Prize of Ukraine.

Electricity department trains specialists are able to develop, design and operate the intelligent energy facilities and systems, integrated power supply system as centralized as well as decentralized, create energy management systems for industrial and municipal facilities based on the concept of Smart Grid, and microsystem virtual power station, create advanced energy management system, work on modern energy-saving, energy efficient technologies to monitor energy industry based on the use of information and computer technology.

Today, the Department is the leading power supply department of Ukraine issue in specialties "electrical power system" and "Energy Management". As an example, note that the power chair is the founder and main organizer of the international scientific conference "Intelligent energy systems - ESS» та «Energy Management: Status and Prospects - PEMS (supervisor - Dr. Denysiuk )

The department developed courses and carried out retraining of specialists and training in the field of energy management and energy, in particular through the Training Centre Energy, which operates as part of the Institute for Energy Saving and Energy in cooperation with the Chamber of Commerce of Ukraine National Academy of Public Administration under the President of Ukraine, for DTEK energy.

The resulting scientific and technical results, including analysis of current prospective areas of electricity and electrical engineering, energy efficiency and energy management experience working with foreign partners, working with government agencies and leading companies of Ukraine, leading Ukrainian and foreign universities confirmed the need to change the name of the department and the names of specializations.