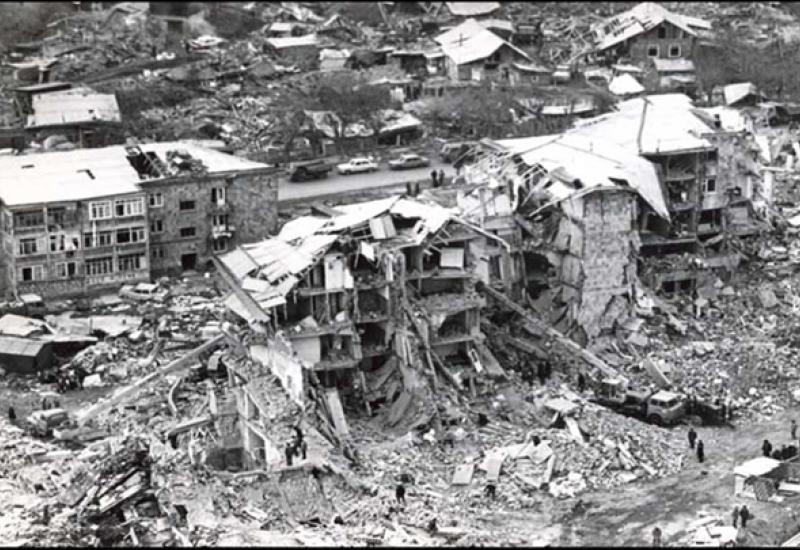 December 7, 1988 at 11:41 local time in Armenia a devastated earthquake took place. A series of aftershocks in 30 seconds almost destroyed the city of Spitak and inflicted heavy destruction to the city Leninakan (now Gyumri), Kirovakan (now Vanadzor) and Stepanavan. 21 towns and 350 villages were affected (of which 58 were completely destroyed).

At the epicenter of the earthquake Spitak earthquake strength reached 10 points (on a 12-point scale), in Leninakan 9 points, 8 points in Vanadzor.

6-point earthquake zone covered a large part of the territory of the republic, the tremors were felt in Yerevan and Tbilisi. Wave caused by an earthquake, and went around the Earth was recorded scientific laboratories in Europe, Asia, America and Australia.

Because of the earthquake, according to official figures, 25 thousand people were killed, 140,000 were disabled, and 514,000 people became homeless.

The earthquake brought down about 40 percent of the industrial potential of the republic. Secondary schools for 210,000 pupils, kindergartens for 42,000 seats, 416 health facilities, two theaters, 14 museums, 391 Library, 42 cinemas, 349 clubs and houses of culture were destroyed or came to the emergency state. 600 kilometers of roads, 10 kilometers of railway tracks were damaged, 230 industrial enterprises completely or partially destroyed.

According to experts, a number of reasons caused the disastrous consequences of the Spitak earthquake: the underestimation of seismic hazard in the region, the imperfection of normative documents on earthquake engineering, lack of adequate training of rescue services, the late medical care, as well as the poor quality of construction.

The chairman of the Council of Ministers of the USSR Nikolai Ryzhkov headed the Commission in the on liquidation of consequences of the tragedy.

Units of the Armed Forces of the USSR, and the Soviet Border Troops came to help the victims in the first hours after the disaster. A team of 98 highly qualified doctors and military surgery headed by the Minister of Health Yevgeniy Chazov flew on the same day from Moscow to Armenia. 50 thousand tents and 200 field kitchens were deployed in the country after a few days.

More than 20 thousand soldiers and officers in addition to volunteers participated in rescue work, more than three thousand pieces of military equipment was used on clearing the rubble. Across the country, the collection of humanitarian aid was actively pursuing.

Armenian tragedy shocked the entire world. In the affected republic doctors and rescue workers arrived from France, Switzerland, the UK, Germany, USA. At airports in Yerevan and Leninakan aircraft landed with a cargo of medicines, blood, medical equipment, clothing and food from Italy, Japan, China and other countries. 111 states from all continents rendered the humanitarian assistance.

All material, financial and human capabilities of the USSR were mobilized for the restoration work. 45 thousand builders from all the Union republics arrived in the republic.

On December, 7 this year we commemorate the 25th anniversary of the Spitak earthquake – the terrible disaster in Armenia which killed tens of thousands of lives. When it happened in Leninakan the assistance to victims of this earthquake was provided by the group of students and staff of the Kyiv Polytechnic Institute "Cascade".

On December,18 at 6 pm at the Cinema House (Saksaghans’kogho St., 6) will take place a demonstration of the documentary “Share your pain” and meeting with its authors, who in those days worked side by side with a group from KPI.

We are turning to members of the group and participants of those events with a request to attend the meeting on the occasion of the 25th anniversary of the tragedy.