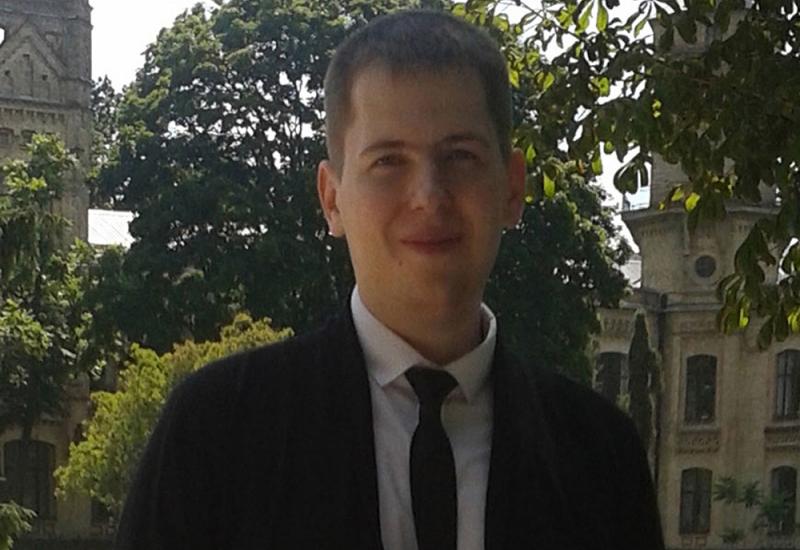 “They have to serve longer,” says Vitaliy Anatolyovych Peshko, assistant lecturer at the Thermal Power Units of Thermal and Atomic Power Plants of the HPEF, the winner of the University Young Contributor-Research Assistant 2017 Competition. Therefore, its scientific researches devoted to operational processes of wear of high-temperature elements of steam turbines of power plants.

Vitaliy Anatolyovych came to Kyiv Polytechnic in 2009 when he became the first-year student of TEF. Since school years he was fond of physics, was a multiple winner of regional and regional competitions, took the 5th place in the all-Ukrainian stage of the school Olympiad in physics. His inquisitive curiosity was stirred up and he became interested in scientific research by a school teacher of physics Mykola Volodymyrovych Barabokhin from the town of Ovruch, which is in Zhytomyr region. Vitaliy Anatolyovych respects his first mentor very much and is infinitely grateful to him for his science.

Student years of V.Peshko ended in 2015 with the award of a Master's degree with honors. In the same year he entered the post-graduate course, which he graduated in advance in September 2017 and defended his Ph.D. thesis on the topic “Management of residual resource of high-temperature elements of steam turbines” in the specialty “Thermal and Nuclear Power Plants”. Work on the thesis was begun while studying in the master course under the direction of D.Sc., prof. O.Yu. Chernousenko. “Olga Yurievna is a person who has taught me to purposefully go to the solution of the task,” said a grateful pupil. The main goal of his dissertation work is to identify the dominant factors and mechanisms of aging, reduce or limit their influence on the rates of exhaustion of the residual resource. The results of the work have been implemented at three power plants of Ukraine.

Within the framework of this scientific direction, the scientists of the Department of Thermal Power Plants of thermal and nuclear power plants co-operate with many generating companies of Ukraine, in particular DTEK Energo, PJSC Donbassenergo, “and carry out economically-reliable and scientific-research work. Vitaliy Anatolyovych Peshko has 25 scientific works, among which 12 articles, three of which are part of the Scopus science-computer database.

The HPEF creative team, which included V.Peshko, participated in the VI Festival of Innovative Projects “Sikorsky Challenge 2017”, where he won the “Energy and Experience” project devoted to the mini-CHP for biofuels.

Currently, Vitaliy Anatoliyovych is a full-time assistant at the Department of Thermal Power Plants of Thermal and Atomic Power Plants, where he began working as an engineer while studying as a master. He teaches disciplines “HEPS and APS”, “Turbines of HEPS and APS”, “Diagnosis of heat and power equipment of HEPSs and APSs”, attracts students to scientific work at the department, to participate in student conferences, in the contest “Youth - energy of Ukraine”.

It is hoped that over time, his students will please their leader with remarkable successes and will mention as gratefully as now Vitaliy Anatoliyovych is looking for his mentors.