Round table dedicated to the life and work of the founder of practical hydrology in Ukraine E.V. Oppokov 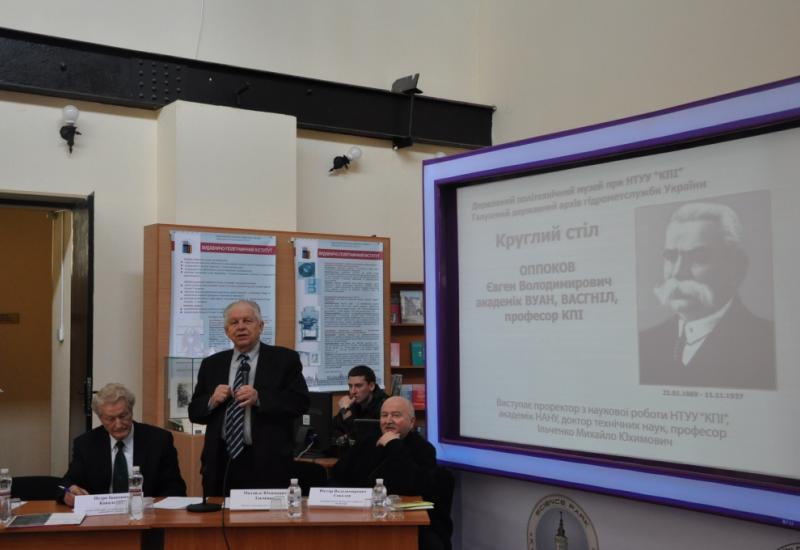 A round table dedicated to the 145th birth anniversary of the founder of practical hydrology in Ukraine, a former professor in the Department of Hydrology and Hydraulic Engineering KPI Evgeny Oppokov (20.01.1869-11.11.1937) was held at the State Polytechnic Museum at NTUU "KPI"

Academician AUAS and Agricultural Sciences, Professor of the Kiev Polytechnic Institute Yevgeny Oppokov was the founder of scientific school, studying natural waters the Earth's hydrosphere, and the founder of the Hydrometeorological Bureau of Ukraine UkrMet. He has written hundreds of scientific papers on hydrology, hydraulic engineering, irrigation, geophysics, including installation manuals and textbooks, written in Ukrainian, "Agricultural Water Technology", "Drainage", "Peat machine." His monograph "The regime of river runoff in the basin of the Upper Dnieper River" in 1908 was awarded by the Russian Academy of Sciences Prize named after D. Tolstoy. For his scientific researches on hydrology of the South West of Russia in 1916, Russian Geographical Society awarded him by the Grand Gold Medal named after F. Litke. A gifted teacher Oppokov trained future doctors, professors, among which we should mention A.Ogievskii, V. Nazarov, K. Makov (corresponding member of Ukrainian Academy of Sciences from 1948), A. Babintsev (Corresponding Member of Ukrainian Academy of Sciences in 1964), V. Tkachuk and others. Unfortunately, his life was tragically cut short in 1937: 15 October of that year, Eugene Oppokov was arrested on slanderous denunciation, and in three weeks - 11 November he was shot in Bykovnyansky forest near Kiev.

The round table discussion dedicated to the 145th anniversary of E. Oppokov, was attended by scientists working in the field of hydrometeorology, geophysics and hydromechanics, historians, teachers, gradutes and students of NTUU "KPI".

Vice-Rector of NTUU "KPI", NASU academician Mikhail Il'chenko opened the Round Table. Leading hydrologist Central Geophysical Observatory Viktor Sokolov took the floor after him. He told the audience about the birthplace of the famous scientist - the village of Ruda Selo, Volodarskiy district, Kyiv region and the first composition of the Hydrometeorological Geophysical Laboratory. Director of Mikhail Hrushevskiy Historical and Memorial Museum Svetlana Pankova gave roundtable participants detailed information about the genealogy of the Academician, and director of the Central Geophysical Observatory Kosovets Alexander made a report on the contribution of Oppokov in the development of national meteorology. Academician of the Ukrainian Academy of Agrarian Sciences, professor, advisor to the director of the Institute of Water Problems and Land Reclamation Peter Kovalenko told about the place that belongs to Academician Oppokov in domestic and world science. Report by the Director of the Institute of Hydromechanics NASU, Academician of the National Academy of Sciences of Ukraine, Professor Victor Hrinchenko was dedicated to the contribution of Academician Oppokov into the development of Hydromechanics of Ukraine. Lecturer of the Department of Hydrology and Hydro-geographical faculty of the Kiev National University Sergey Dubnyak spoke on "The Transformation of hydrology at the Kiev National Taras Shevchenko University". The head of the department of mathematical modeling of the environment of the Institute of Mathematical Machines and Systems of National Academy of Sciences, Professor at the Institute of Radioecology Fukushima University (Japan) Mark Zhelezniak made a report "Computational hydrology - the development and implementation in Ukraine in the problems of flood forecasting on the Dnieper." The last two presentations focused on the historical aspects. Scientific director of the National Agricultural Library of the National Academy of Agricultural Sciences, corresponding member of the NAAS, Professor Victor Vergunov described the activities of E. Oppokov in the context of the formation and development of the agricultural melioration research affairs, and researcher at the Center of scientific potential and sciense history NAS of Ukrane Alexander Lugovskoi - on archival sources, which contain information about his life and scientific work.