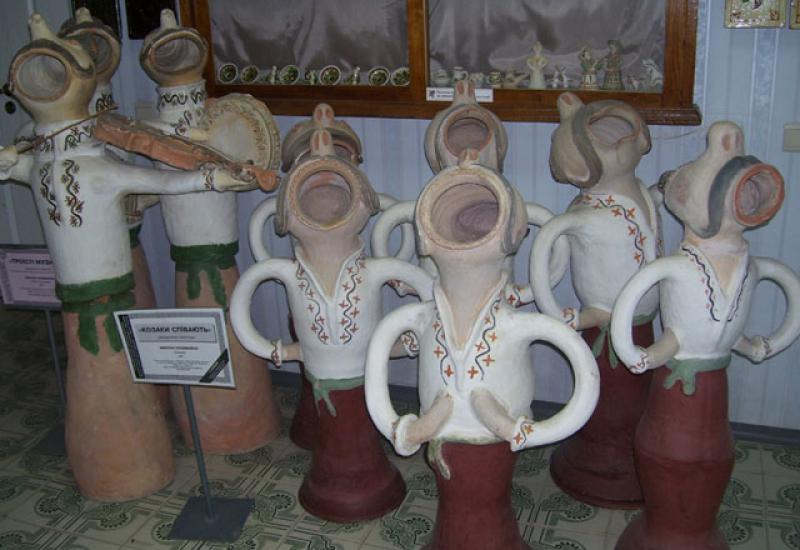 It has long been the life of man is accompanied by pottery. In Ukraine, almost every region had its own large and small pottery centers whose products are distinguished by unique local color and symbolism. But lately, one can hear more and more often about the "pottery capital" - the village Oposhnya in Poltava. Here, at a relatively shallow depth, there are layers of a plastic colorful ceramic clay. Talented people and the availability of material contributed to the development of pottery. In the late XIX - early XX century there were worked in the town about 1,000 potters, whose products are very popular  in the neighboring villages as well as  far from Poltava.

Oposhnya stands on seven hills, formed by the river Vorskla. The local archaeological monuments - Scythian settlement Kardash Hill (IV-III centuries BC), Bielsko settlement (VII-IV century BC), the settlement Romenskaya archaeological culture (VIII cent.) and further Wild field and Muravskiy Way - indicate that the first written mention of the village, which dates back to the XII century, is by no means the beginning of its history. In the XVI-XVII centuries the town of potters, shoemakers and furriers was the Cossack outpost. At the same time under opishnya’s clay loams there were built a network of underground tunnels, which are still waiting to be explored. Oposhnya is included now in the list of historic settlements of Ukraine.

The idea of ​​creating a national Opishne cultural arts center is owned by the famous film director and writer Alexander Dovzhenko. In 1954 he wrote in his diary: "In the evening before bedtime I told my new neighbor the idea of ​​creating in Kiev under the direct patronage of the Government of a small group of muralists, architects, engravers and ceramists to by the village, say Oposhnya and advance agreed with farmers, rebuild it for a few years so that it will become the center of attention all model builders, farmers, tourists, art. "

In 1986, the Pottery Museum was founded in Oposhnya, since 2001 - National Museum of Ukrainian pottery. It includes the Institute of ceramology (Department of the Institute of Ethnology, National Academy of Sciences of Ukraine, the CIS has no analogs), Research Center of Ukrainian pottery, National Archives of Ukrainian pottery, Goncharskaya Library of Ukraine, memorial manors of masters O. Selyuchenko and Poshivaylo. State Specialized Art boarding school I-III stages "Collegium Arts Opishne" that operates as part of the museum, also has no analogues in the CIS and Europe. The museum-reserve has the largest in Ukraine collection of folk artists, potters and ceramic artist (thousands of exhibits), which presents the work of all national schools of art ceramics. It became a place of pilgrimage for tourists, travelers, artists, scientists and artists, officials, citizens of Ukraine and other countries. It is visited by all who want a deeper understanding of their past.

In the courtyard of the museum it is spread so-called Goncharsky ethno park (gallery monumental and landscape clay sculpture). Under the open sky there are presented the incredible works of a variety of sizes and shapes, made by artists from different cities of Ukraine - the winners of Ukrainian pottery festivals held in Opishne. Here and angel with Kurishko (candle holders), and smiling mustachioed old man with a pipe, and traditional oposhnya’s figures, storks which are kind of talisman Opishnya and naked young woman reading a magazine "Natalie" and the villagers look at her through fence and  Centaur and Chorus of the Cossacks.

There are interesting exhibits in the museum as well. Take, for example, Cupboards, laden with dishes from all over Ukraine: here and terracotta (not covered with shiny glaze) pitchers, the milk in them can be stored for a surprisingly long time, and liqueurs, what to wear on the arm, and pots and others. In the museum you can see a unique exhibition of photos of the late XIX century, to view the collections of decorative plates, even make your own clay work. It is  the incomparable feeling when under your fingers it comes to life a piece of clay, extends, takes the shape turns into a product.

Perhaps the best impression of the museum was expressed in 1999 by Jerzy Bahr, the then Ambassador of Poland to Ukraine: "I thought that I will see the clay, but I saw the people."