To the 100th anniversary of the birth of Professor A. V. Pavlov. Scientist, mentor, colleague. 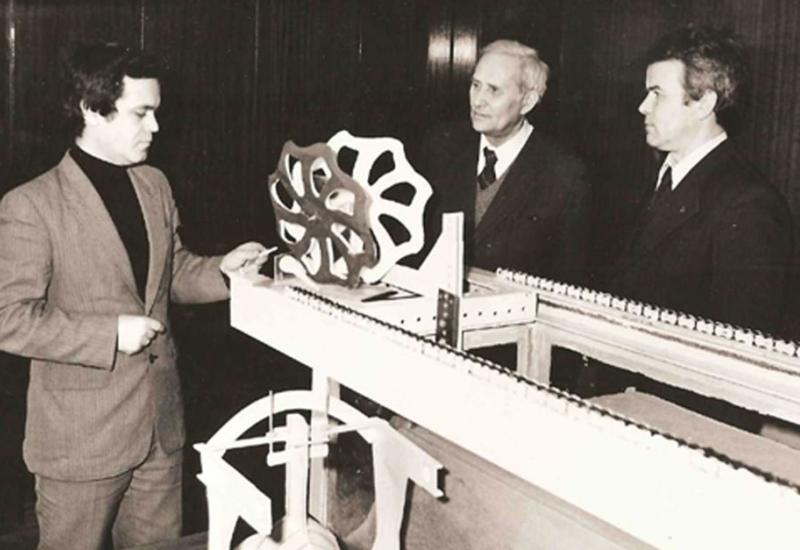 Senior polytechnics remember Anatoliy Pavlov (1919 - 2008) - an outstanding scientist in the field of geometric surface modelling, Doctor of Technical Sciences, Head of the Department of Descriptive Geometry, Engineering and Computer Graphics (1965–1989), Academician of the Academy of Sciences of Ukraine Higher School of Ukraine (1994), Honored Worker of the Higher School of Ukraine (1972), organizer of the world-renowned scientific school of applied geometry.

A. V. Pavlov was born on June 16, 1919, in Kyiv. His father was one of the first pilots, and his love for aviation has been transmitted to his son since childhood. His mother who was a teacher did not prevent her son in these hobbies. In 1937, the young man entered Igor Sikorsky Kyiv Polytechnic Institute in the speciality "Machine tools, tools and metal machining." After completing his studies in 1941, he was assigned to the Kyiv Aviation Plant, and then evacuated to Novosibirsk at the beginning of the war, where he worked as a senior technologist of a stamping and tooling shop of the Aviation Factory named after Chkalov V. P. This factory produced more than 25 fighter jets during the day and forged our victory over the Nazis.

There, at Novosibirsk Aviation Plant, the direction of its future aircraft-related scientific activity was formed, with the construction of new complex surfaces that corresponded to certain technical and technological tasks and were carried out based on advanced information technologies using the directions of multidimensional geometry. Therefore, working in Igor Sikorsky Kyiv Polytechnic Institute since 1946, A. V. Pavlov conducted further researches on this subject by methods of descriptive and applied geometry to create technology for constructing geometric models of surfaces of complex shape.

Within the walls of our institute, he receives the scientific results which formed the basis of his PhD and doctoral dissertations. The research was carried out in conjunction with the Kyiv Mechanical Plant named after O. K. Antonov, Kyiv Aviation Production Association, Aviation Technology Research Institute. As a result of cooperation at the enterprises of the industry systems of geometric calculations "Sigma" and "Sigrant" were created. Under the direction of A. V. Pavlov, 11 engineers from two aviation factories in Kyiv and our institute completed their postgraduate studies and defended their dissertations. Three of them became PhDs.

It was at this time that agriculture had to be raised, and Anatoliy Volodymyrovych, as a scholar of a wide profile, began scientific research aimed at developing new methods of geometric modelling of working surfaces of soil tillage tools. The researches were carried out based on the creation of models of working structures, experimental designing and introduction into production of new surfaces of working bodies of soil tillage tools. The next stage is the introduction of new equipment samples with field tests of new work surfaces and patenting of the obtained solutions (All-Ukrainian associations "Ternopil Combine Plant", "Budshlyakhmash", "Dzhulinka", Vinnytsia region). In this direction, teachers of the department received more than 100 copyright certificates for inventions, 12 patents from different countries (GDR, France, China, India, Hungary, Bulgaria), created industrial and serial samples of new advanced agricultural tools, marked with the medals of the VDNG URS.

Anatoliy Volodymyrovych constantly took care of young researchers, adjusted their introduction into production. He closely followed the developments of young teachers, gave seminars and sent them to international conferences, which enriched, encouraged and further prospected in research.

Also, Anatoliy Volodymyrovych proved himself as an outstanding teacher. He created a course in video lectures on sketched geometry, which he read in advanced training courses for university teachers from all over the Soviet Union, prepared by the television studio of Igor Sikorsky Kyiv Polytechnic Institute in the 1980s, which demonstrates the outstanding teaching talent and skill of the academician. This course is also used by modern students, it logically fits into distance education and today helps teachers of our institute and other higher educational institutions to improve qualification and lecturing skills.

In the 1980s-90s under the guidance of Professor A. V. Pavlov, this system has been improved and strengthened by technical means of training, in particular educational television. For this purpose, a video lectures course on descriptive geometry was created, which was read by Professor A. V. Pavlov. This course, together with specially designed workbooks and programmable control cards using video recorders, became the basis of the so-called "parallel learning", developed by Candidate of Sciences (Engineering), Associate Professor H. O. Hnitetska and intended for students' extra-curricular independent work.

In the 1990s, the department became one of the pioneers of teaching undergraduate students the basic geometry, engineering and computer graphics. Teachers of the Department - Professors V. V. Vanin, Y. I. Badayev, S. M. Gribov, Assistant Professors V. Y. Zalevskiy, O. O. Strelchenko, Y. A. Doroshenko, Y. P. Kovalevsky, Y. M. Gorodetsky - have developed appropriate methodological support. It should be noted that the theory of geometric modelling developed by Professor A. V. Pavlov and his students was embodied in the development of various products from the "Buran" spacecraft and planes to the environmental tools of agricultural engineering. Created by Anatoliy Volodymyrovych, the scientific school continues to exist and develop under the guidance of its students, and its scientific heritage opens new horizons for research conducted by young scientists. We always remember and honour our teacher, our mentor. Our followers, our disciples, will always respect him.