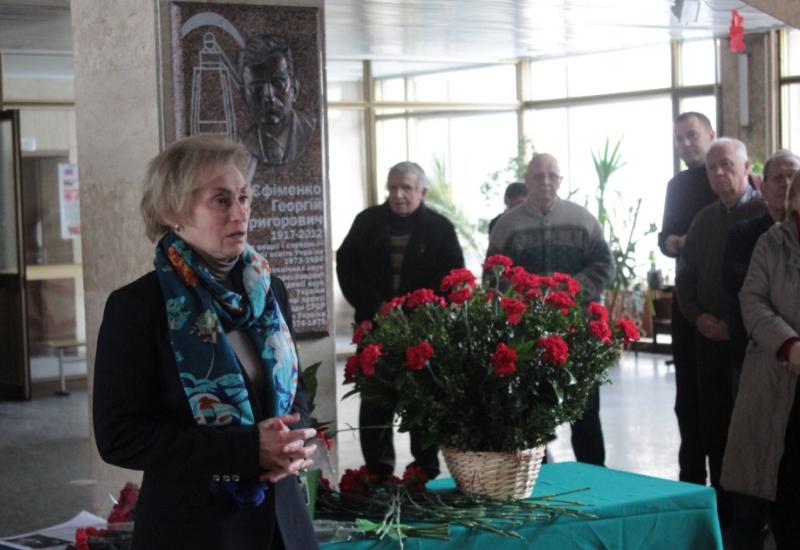 January, 29 in the lobby of the ninth building, where the engineering-physical faculty of the Igor Sikorsky Kyiv Polytechnic Institute is located, was opened solemnly a memorial plaque to a prominent scientist, organizer of education and a teacher, a former employee of the university Georgiy Yefymenko (1917 - 2012).

The rector of Igor Sikorsky Kyiv Polytechnic Institute, member of the National Academy of Sciences of Ukraine Michael Zgurovsky, daughter of Georgiy Yefymenko Olena Georgiivna and his grandsons Roman and Volodymyr, associate professor of the Faculty of Engineering and Physics, member of the National Academy of Sciences of Ukraine Petro Loboda, long-term colleague on work in state authorities vice-president of the Ukrainian association of metallurgical enterprises Sergiy Greshchenko, the head of the project for the creation of a memorial plaque head of the department of general physics and solid state physics of the Faculty of Physics and Mathematics Vitaliy Kotovskyi and author of the memorial plaque, sculptor Olexandr Kuzmin, students and colleagues of the scientist, employees and students of the university took part in the opening ceremony of the memorial plaque.

Petro Loboda, who led the ceremony, spoke about the life journey of Georgiy Yefymenko.

Yefymenko lived a long life, full of victories and creative work. He graduated from the Dnepropetrovsk Metallurgical Institute in 1940, went through the front of the Second World War, participated in the storming of Berlin, as a researcher actively worked in science, headed Dniprodzerzhinsk Metallurgical (now Dniprovsk State Technical University) and Dnipropetrovsk Metallurgical (now National Metallurgical Academy of Ukraine) institutes. He was a minister of higher education and from 1973 to 1984, minister of higher and secondary specialized education of the USSR. For many years, his work activity was associated with work at Igor Sikorsky Kyiv Polytechnic Institute.

Yefymenko’s research was aimed at solving the main problems of preparing metallurgical raw materials, using it in metallurgical equipment and controlling the domain process. He made an important contribution to the development of the production technology of highly effective types of furnace charge. The wide scope of his work, allowed to significantly deepen and expand the physico-chemical basis of sintering iron-oxide materials.

For many years, Georgiy Yefymenko maintained close ties with the Igor Sikorsky Kyiv Polytechnic Institute, and from 1984 to the end of his life he worked at the university. In 1985, he initiated the creation of a research laboratory of new methods for preparing metallurgical raw materials at the department of physical and chemical foundations of metal technology at the faculty of engineering and physics and became its first director. In 1988, the laboratory was transformed into the general faculty research laboratory of new processes and technologies in metallurgy. Georgiy Yefymenko is the author of over 200 scientific papers, including 60 inventions. With his participation were prepared and published textbooks for universities. In addition, under his leadership, were prepared a lot of scientists: more than 50 doctors and candidates of science.

Michael Zgurovsky said: “Georgiy Yefymenko was a man whose work changed the country. When he worked as a minister, science, education and production were inseparable from each other. The growth of the economy and the level of security of the country due to the connection of these components were fantastic. Georgy Yefymenko paid a lot of attention to science itself. We are witnessing this. He made a great contribution to metallurgy, working at Igor Sikorsky Kyiv Polytechnic Institute. After completing his work in the ministry, in 1984 Yefymenko finally came to our institute, created and helmed a research laboratory, and here, until the end of his life, he was engaged in significant research.”

More details about Yefymenko were told by his daughter Olena Georgiivna. She said: “In his work my father always combined scientific work and work in higher education. The main idea in this work was to move forward and develop both science and higher education in Ukraine.” In the end, she thanked the staff of the engineering-physics department and the university authority for perpetuating the memory of her father: “I am grateful to my father's colleagues, his students, everyone who came to the opening a memorial plaque today for appreciating his contribution to the development of science and higher education in Ukraine, and remember him”.