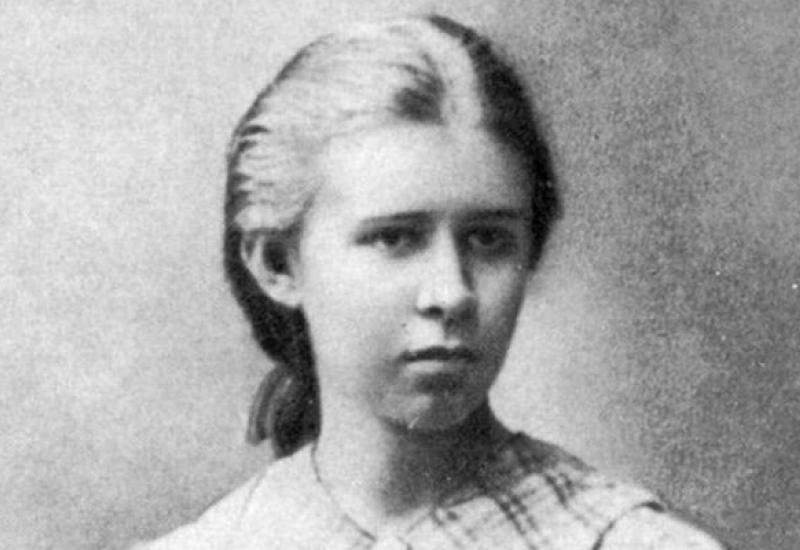 Some singers have glory after death, others - in life. But it was not crowned with rose petals but thorns. Dawn of the poetess was bright, and was darken only from an illness. The mother called her daughter Ukrainka because the heart and soul of the girl ached for the fate of the Ukraine (she was not hiding in the literature for the man's name, nickname, as George Sand and Marco Vovchok did, she did not consider fashionable). As God gave Ukrainian song, so endowed girl with song-word. Taking it a word that tenderly, then fiercely, then gently, then with pain and tears, then with a laugh.

February 25, 2010 marks 139 years since the birth of Larysa Kosach-Kvitka (Lesya Ukrainka), from Zvyagel. Her literary career began very early: in nine years she wrote her first poem, and in thirteen – her poem was printed. In one of her letters to Olha Kobylianska she noted that "to get on the literary path was easy, because the family was creative." Her inner circle included highly educated people. Mother (Olga) was trying to fully develop children, and there were six of them. For the eldest son of Michael and second child - Lesya - she created her own curriculum, which is taught by up to fifth grade.

Talent poetess was formed under the influence of many factors. The love to the Ukrainian people, their land, folk songs (it was collected and recorded hundred five tunes that were later published as a collection by her husband Clement Kvitka) saturated her work. She was not only talented in poetry, but also perfectly played the piano, had a gift to music, drawing. Said that it would be better musician than a poet, "but nature has played a joke with me."

The girl had no secondary or higher education, but belonged to the most educated people of her time. She easily studied languages - classical, European – she read the works of world writers in their languages, made translations from German, French, English, Italian, Polish. In 1890, she wrote a textbook on the history of the peoples of the ancient East to younger sisters.

Poems were written, rushed, they could not be stopped, but there is always a strict critic - the mother. The first collection of poetry, published in 1893 in Lviv, had a poetic name "On the wings of songs" not in vain. At present, the author carefully working on the translation: Gogol, Turgenev, Mickiewicz, Hugo, Byron, "Book of Songs" Heine (92 translations). She tried her hand at prose: "That is its fate", "Butterfly", "Spring Song", "Lelia", "Sorry."

1899, in Lviv second collection of poems "Thoughts and Dreams" was published. It included the poetic heritage in six years: own painful intimate experiences, political orientation.

The character of the poetesses formed together with the works . Her sentiments were reflected in the thematic cycle of political poems "Slave Song" (1895-1896). Author imbued with the idea of struggle. Like Shevchenko she said that "people will wear shackles and sleeps quietly under them." There was a fiery call to fight for social and national liberation of the people.

Ivan Franko in 1898 in one of his articles, noted "Since Shevchenko" Bury and get up, tear the shackles of "Ukraine has not heard of such a strong, hot and poetic word ..." The first and second collections were the result of a powerful talent of Lesia Ukrainka on the turn of the eras.

For some time the writer lived in Bukovina. It gave rise to the third edition of the poetry collection "Reviews" (Chernivtsi, 1902). The composition is interesting. Time, minutes (cycle "Minutes"), of which human life, are filled with some content, not similar to each other. There is a reference to the ancient and biblical themes, various periods in the history of European peoples.

Talking about the creative range and thematic diversity of poetry and drama Lesia Ukrainka, it is necessary to emphasize the role of the Bible in her work. From a letter to Mikhail Petrovich Dragomanov from December 21, 1898: "In the Bible, among other things, there is the mass of wild grand poetry, and I'm bored if I do not read it for a long time."

In Kiev, in 1904 there was published a book of poems "On the wings of songs" - the final edition of the three previous collections. Gradually lyrics is combined with the epic, and the dramatic poem became the main genre. The poetess’s nature tried to break out of "its own lyrics." In a short period of time - ten years – it has been written more than twenty-dramatic works, which have become a new phenomenon in the Ukrainian literature. In drama Lesia Ukrainka use images and stories of world literature, and history. She considered ethical, philosophical and political issues. Taking the classic stories and images, she filled them with new content, characters; selects scrapped ages, bright heroic figures. Dramatic moments were woven in lyrical works. Genre poem has a significant place in the asset of Lesia even from an early age. "Robert the Bruce, King of Scotland," "Old Tale" (1893), "Obsessed" (1901), "On the ruins", "Autumn Tale", "In the catacombs "(1905)," Babylonian captivity "," Cassandra "(1907)," In the Forest "(1909)," Rufin and Priscilla "(1910)," lawyer Martian "," Vila posestra "(1911)," The Stone host “. The swan song were became "Forest Song" (1911), "Isolde Belorukov" (1912).

In May 1913 Lesya Ukrainka last visited Kiev. The youth and intellectuals honored poetess at the literary evening dedicated to her works. She said at the meeting that cannot imagine life without work. After two months - August 1 1913 - Larisa Kosach-Kvitki died. Maksym Rylsky put all her life journey in one word - struggle. Lesia voice was heard outside of Ukraine in her works, which were translated into many languages.

Fragile but courageous woman got eternity ...