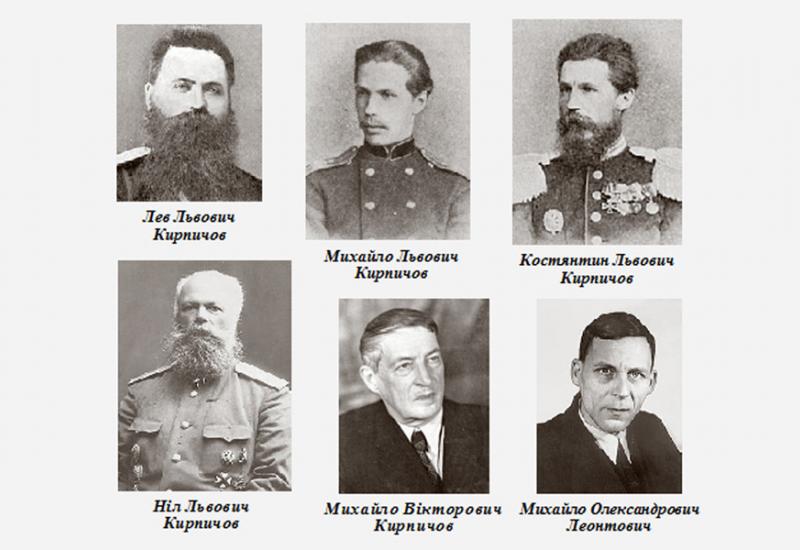 Victor Kyrpychov's grandfather, Matviy Kyrylovych Kyrpychov (1781-1868), was born in a peasant family from Vitebsk province. But he himself went from a simple soldier to a lieutenant colonel. He was a participant in the Russo-French War of 1812, during which he received an officer's rank for his services in battle, and later became an adjutant of the famous military leader - General Peter Konovnitsyn, with whom he participated in several campaigns of 1812-1814. He was awarded military orders, including a very high order of St. Vladimir of the 4th degree, which gave the right to hereditary nobility. After retiring in 1832, he bought an estate in the village of Bardino in the Pskov region.

Matviy Kyrylovych's only son, Lev Matviyovych (1808-1862), inherited his father's military profession. However, he did not become a military or staff officer. After graduating from the Main Engineering School in St. Petersburg, he was left there as a teacher of mathematics, and later held the position of assistant inspector of this school and other military schools. The dynasty of teachers and scientists began  from him, its achievements became the property of all domestic education and science. Lev Matviyovych Kirpychov collaborated with prominent mathematicians Mykhailo Ostrogradsky and Viktor Bunyakovsky, and maintained friendly relations with the latter and even translated and published several books on mathematics and ... Honore de Balzac's novels. It was in honour of Bunyakovsky that he named one of his sons Victor. Unfortunately, due to a progressive eye disease, Lev Matviyovych retired relatively early, at the age of 40, and from 1848 he settled on the family estate. All his children grew up here, and he devoted the rest of his life to their upbringing.

There were many children, but four sons and one daughter died in infancy. Seven brothers and one sister survived: Matviy, Lev, Konstantyn, Victor, Michael, Nil, Ivan and Julia. The cult of education prevailed in the family. Mother Olena Kostiantynivna (Brun) prepared children in almost all disciplines for educational institutions. And in mathematics - Lev Matviyovych himself. And he prepared in such a way that neither during his studies nor during his independent work did any of them ever have any problems with mathematics: he not only gave them the necessary knowledge, but also instilled a love for the subject. And Kyrpychovs fell in love with books. The house had a first-class library, which was constantly replenished with new books. The whole family read and discussed what they read: Lev Matviyovych believed that this brings great benefits to children's development.

All his sons graduated from the Polotsk Cadet Corps. Their future destinies were different, but in general they were similar - they all became military engineers (only Viktor Lvovych retired after several years of military service, but without betraying his engineering profession) and scientists, and five of them reached real heights in their business. A separate material is devoted to Viktor Lvovych Kyrpychov, but we will tell about his brothers who became famous scientists below.

Lev Lvovych Kyrpychov  (1840-1890) – a graduate of the Konstantinovsky Military School and the Mikhailivsk Artillery Academy. Major General. Professor and class inspector of the Mikhailivsk Artillery Academy. But he gave lectures not only in it, but also in the Mykolayiv academy of the General Staff. Author of the famous works "General Fundamentals of Mechanics" (1870) (awarded the St. Michael's Prize); "Principles of Mechanics" (1871 and 1889); "The Beginnings of Ballistics" (1889); lithographed courses for the Mikhailivsk Academy "Ballistics" and "Artillery Guns", for the Mykolayiv Academy of the General Staff "Artillery" (1887) and many others. He wrote a large number of special and review articles for the "Artillery Journal", "Military Collection", "Russian Encyclopedic Dictionary”  by Berezin, "Encyclopedia of Military and Naval Sciences" and other publications. He was considered one of the best teachers of the Mikhailivsk  Academy. He had no family of his own, devoting himself to work and younger brothers. Viktor Lvovych Kyrpychov wrote that he was an example for them and replaced his father.

Konstantyn Lvovych Kyrpychov (1844-1910) - a graduate of the 2nd Military Konstantinovsky School and the Mykolayiv Engineering Academy. Engineer General. Participated in the Russo-Turkish War of 1877-1878. Honoured Professor of the Mykolayiv Engineering Academy, where he taught fortification. He also taught a course on bridges at the St. Petersburg Institute of Technology. He held the position of Assistant (Deputy) Chief of the Main Engineering Department, later was a permanent member of the Engineering Committee. Author of more than 200 special and review articles in the "Engineering Journal".

Mykhailo Lvovych Kyrpychov (1847-1875) was a graduate of the Mykhailiv Artillery School and the Mykhailiv Artillery Academy, graduating first in his course with his name inscribed on a marble plaque. He was left as a chemistry tutor and soon became a lecturer in this discipline. He published several articles in the Journal of the Chemical Society, which immediately attracted the attention of experts. He collaborated with Dmitry Ivanovich Mendeleev in the study of gas elasticity. The exposition of his work is made in Mendeleev's book "Elasticity of gases" (1875). He had high hopes, but his early death did not allow them to come true…

Nil Lvovych Kyrpychov (1850-1927) - a graduate of the Mikhailovsky Artillery School and the Mykolayiv Engineering Academy Engineer General. Honoured Professor of the Mykolayiv Engineering Academy, Professor of a number of other military educational institutions, the first chairman of the Aeronautical Committee at the Main Engineering Department. In parallel with the main service at the Mykolayiv Engineering Academy, he taught mechanics at the St. Petersburg Electrotechnical Institute (and headed the Department of Theoretical Mechanics there), as well as courses in fortification and mathematics at several other military schools. He developed a method for calculating the efficiency of ruptures of new types of artillery shells, formulated the norms of design loads for various types of bridges, acted as an expert in the development of projects and construction of a number of bridges. In the 1880s and 1890s he took part in the design of balloons and airships, and took a direct part in the development of the first Russian military airship, the Krechet, which was adopted in 1910. During the First World War, Nil Kyrpychov was a permanent member, and from January 1917 - head of the Main Technical Department. In 1918-1920 he served as head of the Engineering Department at the Main Military Engineering Department of the Red Army, later taught at the Kuibyshev Military Engineering Academy.

The youngest child in the family was Julia Lvivna Kyrpychova (married - Krakau (1861-1926). She graduated from the Physics and Mathematics Department (first issue) of the St. Petersburg Women's Courses. She worked as an electrical engineer, later - a radio technician. She married one of the founders of electrochemistry in the Russian Empire - Professor of the St. Petersburg Electrotechnical Institute Olexandr Olexandrovych Krakau (1855-1909) ...

However, in this generation, the family tradition of devoting oneself to the technical sciences has not been interrupted.

Let's look at only the descendants of Viktor Lvovych Kyrpychov.

His son, Mykhailo Viktorovych Kyrpychov(1879-1955), became an outstanding thermophysicist, the first in history academician of the USSR Academy of Sciences. He dealt with many problems of heat engineering, especially in the field of convective heat transfer in pipes of different cross-sections, hydrodynamic theory of heat exchange in ventilation systems in buildings, and so on. He made a significant contribution to modern technical science, developing his father's ideas in the theory of similarity and the theory of modelling of technical systems. Author (together with O.A. Gukhman) of the well-known similarity theorem (Kyrpychov-Gukhman theorem), which describes sufficient conditions of similarity in physical processes and is the scientific basis for modelling physical phenomena. His fate was quite dramatic: in 1930 he was even arrested in a fabricated "ODPU party case" by the ODPU, accused of vandalism, and sentenced to 10 years in a labour camp. However, the authorities soon realized the value of this specialist and in 1932 allowed him to return to the profession, and in 1941 he even received the Stalin Prize for scientific work "Modelling of thermal devices.”

One of Viktor Lvovych's grandsons, the son of his daughter Vira (1877-1919) and professor of the Kyiv University and Kyiv Polytechnic Institute, well-known physiologist and histologist Olexandr Vasyliovych Leontovych, Mykhailo Oleksandrovych Leontovych (1903-1981), also became an academician of the USSR Academy of Sciences.  Mykhailo Oleksandrovych Leontovych was an outstanding physicist, wrote classic works on radio physics and high-temperature plasma physics, won the Lenin Prize. And also - a well-known human rights activist, a man who was called the conscience of the Academy…