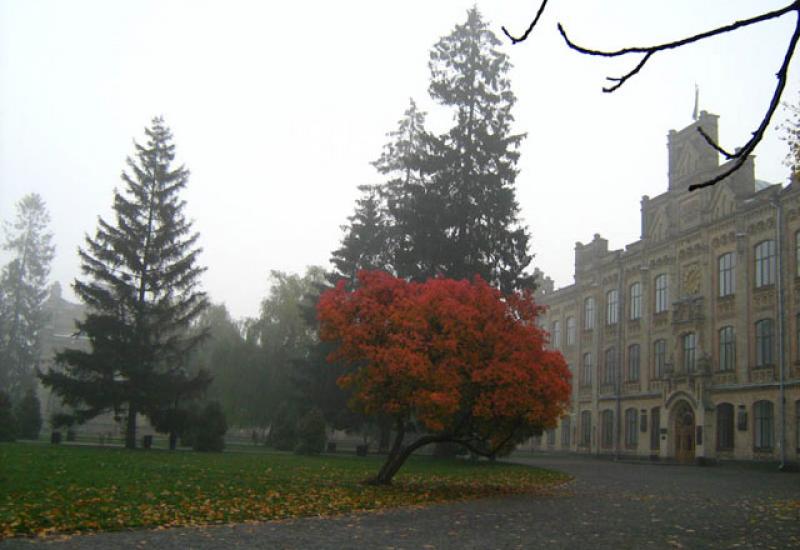 Students and workers of NTUU “KPI” have got used so much to the part on the territory of KPI where they can walk, run in the morning, meet with their friends or even prepare for exams or lectures that they can’t even imagine KPI without its park. And it is true that this local landmark was founded at the same time as our university.

The territory, now occupied by our university, earlier was a military field with many ditches and no trees. On the line between present Peremohy Avenue there was a ditch about 2 meters deep. The first housing development of the institute territory was made upon the project of the famous at those times architect I. Kishner. At the same time as students and lecturers took part in putting up buildings and apartment blocks, dendrological park and park were also founded on the territory of our university. The square of these parks was about 15 hectares.

It cost them 49, 143 rubles 48 kopecks to construct a park. The designing was based on the regulatory principle that is so-called Formal Park, which means that design made of walkways, paths and planters is regular-shaped.

The walkways connected the nearby streets with academic and residential areas. As a rule, walkways were planted with trees and shrubs. Even nowadays we have walkways planted with ash in the eastern part of the park, with lime that goes from the building № 4 to the Peremohy avenue, with oak in the southern part of the park, with chestnut-trees along the Peremohy avenue and near the building № 1. These plantings lengthened from the avenue into semi outdoor and outdoor landforms near the buildings. It enabled to combine organically ornamental trees and shrubs with architectural structures that created picturesque landscapes of the KPI. You can find such trees as pine tree, spruce and larch on the territory.

The most trees were planted according to the type of forest crops that is seedlings aged 2-5 years. Such seedlings as false acacia, silver maple, field elm, oak, ash, small-leaved lime, Norway maple, pine tree, birch and spruce were brought from Fastiv forest division. The most ornamental and rare trees and shrubs were taken from Botanic garden of Kyiv University of St. Volodymyr (nowadays University of T. Shevchenko). Larch, oak, ash, Norway maple and lime naturalized best of all as they live very long time. Particularly, larch lives 300-400 years, sometimes even 700; oak lives 300-400 years, but sometimes even more than 1000 years, Norway maple – 150-200 years, lime – 300-400 years, sometimes 1000 years.

In the years of the World War II KPI Park was not hurt as much as other parks and forest areas of Kyiv. Kyiv is known to have gone through many red battles and fascist invasions which caused its almost total destruction. Systems ensuring the vital activity of the city were damaged. Until they resumed the operation people had nothing to do but deforest in order to heat their dwellings. In Sviatoshyn area most buildings were single-storey sites and not many people lived there. What helped KPI park to go through those times was a big stock of timber which included zoo, Pushkin Park and Nyvky Park, and also suburban housing and park belt.

Park is like living organism. It should be looked after to have a good look. The KPI Park was not always looked after in appropriate way as there were no enough skilled persons. So there were many examples when so called “gaps” were planted with trees which destroyed the architectural structure of the parks. It caused overcrowding of trees, shrubs and grass. Because of it many trees decelerated and were exposed to illnesses. Park shrubs almost disappeared.

About 10 years ago designers made an inventory of plantations. There were about 9, 000 trees on the territory of 15 hectares. About 600 trees were placed on the area of 1 hectare which contradicted the norms of soil and climatic parameters, according to which only 300-350 trees can be placed on such a territory. Such situation was caused also because of society’s being against deforestation. People had not enough knowledge in the sphere of urban forestry and recognized only deforestation of diseased trees.

During the last 2 years the park reconstruction has been carried out upon the project of “UkrNDIinzhproekt” by organization “Kievzelenbud”. Such reconstruction includes deforestation of dead and diseased woods, planting of new trees and shrubs, reconstruction of rockery, plantation of grass lawn, construction of decorative paths. In such a way formal park transforms into regularly-landscape park.

There were both fortunate and unfortunate days for the park. A part of trees died because of lifetime (as their lifetime is 20-30 years even under the conditions of appropriate tending), some part died because of inappropriate tending. Nevertheless, a lot of trees have survived and now are growing in our park with the new ones. Nowadays on the territory of KPI you can find many trees among which there are larch, maple and other.

Larches are the highest trees in not only KPI Park, but also in Kyiv. It is the three which is planted near the entrance to the UN Headquarters in New York. It is a kind of symbol since larch is the most widespread tree in the world. Pine trees and spruces were deforested in the vast expanses of Siberia, which is the largest area of larches. There was no need to deforest larches as they sink in the water and are hard to transport. Advantages of these trees are that they don’t dote in humid environment. For example, the old site development of Saint Petersburg is still situated on larch piles. This tree has a big value in forest-park architecture as it is resistant to frosts, winds and different gases. Moreover, larch grows very fast and has a long lifetime and different ornamental forms.

You can also find huge oaks on the territory of KPI park: red oak, swamp oak and other. Swamp oak is rare species especially in the age of 100 years. There are only 2 swamp oaks in the park. Pedunculate oak is native all over Ukraine. For very long times its wood pulp was used in the household use for icon and candleholder creating and building. It was mentioned in folk songs and legends. There are two oak forms in our park: summer and winter ones. There is no big difference between them, but summer form sheds leaves and winter ones don’t.

Maples also have a great value. Silver maple is brought to Ukraine from Canada. Canadians honor this tree. In early spring they extract juice from maple trunk and this period is celebrated as a national holiday. In Ukraine silver maple blossoms earlier than other trees: in the end of March - at the beginning of April.

There are a lot of rare trees in KPI park, for example, Kentucky Coffeetree and wing nut which are also brought from the North America. The list of useful and ornamental plants is very long because today there are about 90 species and forms of trees and shrubs that are planted in the park of KPI. And because of this fact our park can be classified as dendrological one.

At the backside of the building № 1 such specific ornamental trees as gingko bilioba, European beech and wing nut are planted. They are a part of old dendrological park that was founded 110 years ago. Maidenhair tree is relict tree and has a lot in common with ancient plants. It is the only species of Ginkopsida that has survived till nowadays. Such trees were widespread in the Mesozoic. For a very long time those trees were believed to have died. But one day maidenhair tree was found in one of China countries. Since that time they became widespread all over the world. It is not only beautiful tree but a very valuable material for furniture production and its seeds are good to eat in Japan. This tree is also used in the medicine as medicinal plant.

European beech is also ornamental tree. This species is not spread all over Kyiv and such old trees as ours are very rare.

It is spring – the best season for parks. Not so long time ago this period was celebrated as Bird Day. Schoolchildren hanged birdhouses on the trees and those actions tool place all over the country. Unfortunately, today this holiday is not so popular. Even ten years ago there were much more birds in the park. They nested in the hollows of the tree trunks, birdhouses and in shrubs. In the central part of the park on the trunks of birch and aspen the number of birds was so huge that they seemed to be beehive. Unfortunately, those trees were deforested. Hollowed trees should be saved for birds to live in because hollows are not disease – they are formed because of the age of a tree. We should renew our old traditions in order to save trees and birds.