The newspaper “Kyiv Politechnic” is published since April 21, 1927. Editing:

In the informative space of the Kyiv Politechnic Institute appeared a new newspaper – “Kyiv Politechnic” in April 21, 1927. It was a difficult period of formation of the Soviet Union, which was the part of Ukraine. At the root of the newspaper were students of polytechnics who had a talent for literary work. Its first editor was the student John Moysya. He was a bit older than his classmates because he had to take part in the Civil War, from the front of which he had just returned. This guy had a considerable literary talent and was already known in literary circles as the author of many stories. Later he was known over the whole country – as the author of the first in the Soviet literature production work – "Roman Intermountain" and the historical epopee “Hmelnytskiy”. However, these novels he published under the pseudonym Ivan Le .

The story of this pseudonym is interesting. Once Ivan Moysya wrote in the local newspaper story in which he signed the full name – Ivan Leontiyovich Moysya. However, the newspaper staff could not make out the handwriting of a young author and staying on the first two letters after name. Since then, a combination of the two letters was the pseudonym of a young writer. A young writer not only attended the KPI and wrote the story, but also took part in organizational issues in Kyiv branch of the Ukrainian Union of Proletarian Writers (UUPW) – as its head. He was an editor of a writer’s magazine. The first number of this edition was published in March 1927. This newspaper exists even today – but now we know it as " A literary Ukraine ".

A glorious destiny was waiting for this publication. Newspaper continues its existence, bringing to kyiv’s polytechnics, and many other readers information about the best universities in Ukraine, its achievements, research and innovation, the aspects of its history and course of today’s life.

"Kyiv Polytechnic" comes out weekly. It has an appealing look and is highly respected by the interest of the readers. On the front pages of newspapers, materials are printed about the learning process, the outstanding historical figures who played a major role in building the state, the prominent teachers and researchers of the KPI, who created and developed within its walls widely known schools. The newspaper always publishes materials about outstanding students who have achieved considerable success in scientific, technological, mathematical, physical, chemical and engineering competitions .

The newspaper "Kyiv Polytechnic" is actually a chronicler of the National Technical University of Ukraine "KPI". Talented people works in the newspaper, understand what the traditions of the university and how important to preserve it for future generations .

We are holding a copy of the first issue and see at the center of the first page the article of Yevgen Paton, at those time the professor of KPI. There are other materials that demonstrate enthusiasm of the post-revolutionary years and urge readers to the active creative work. By the way, the materials in a newspaper published in the language they were written – both Ukrainian and Russian. In this case, no restrictions on basis of language did not exist. All these took place on the background of the general life of ukrainianization.

The current membership of the newspaper " Kyiv Polytechnic " produces not only the weekly newspaper but also Russian- Ukrainian -English digest , which reflects events of the international scope that took place at the University. In addition, the newspaper is preparing to release an encyclopedia "Who is who in the KPI ", accompanies sites of NTUU "KPI" in the Internet, prepares materials about the university for other publications.

The story of newspaper does not end there . It will continue to live , bringing people accurate information about the best technical university of Ukraine , helping improve its image both in Ukraine and in the whole world !

Volofymir Yankoviy, chief editor of " Kyiv Polytechnic ", member of the National Union of journalists of Ukraine. 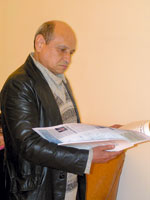 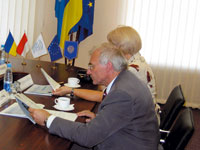 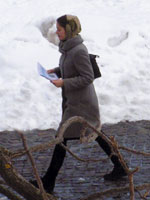 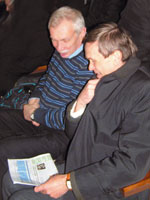 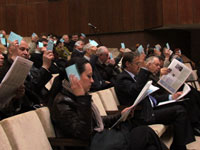