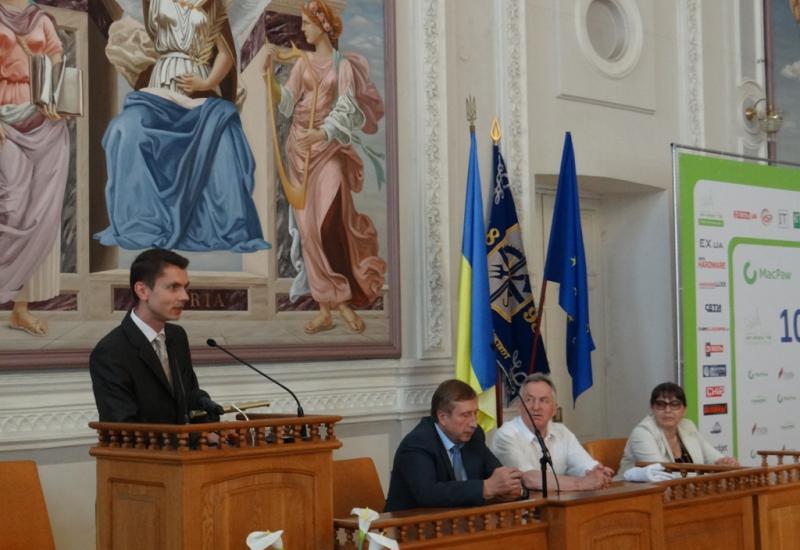 The tenth anniversary international open student’s Olympiad of programming named in favour Lebedev and Glushkov has started in June 30 in NTUU "KPI" – “KPI-OPEN 2015”.

During four days the representatives of Ukraine, Poland, Lithuania, Estonia and Russia universities will compete in this most famous in Eastern Europe and one of the biggest tournaments in the world of the most promising young programmers for the title of the best. The Olympiad is conducted under the original rules, which correspond to international requirements of such tournaments.

By tradition, the organizers of the Olympiad were the National Technical University of Ukraine "Kyiv Polytechnic Institute" and the company Vanopl Development Group. Ministry of education and science of Ukraine, as well as the Cyber Centre of the National Academy of Sciences have provided support to organizers.

In addition, if sponsors do not help, realization the Olympiad would be extremely difficult. In this year, sponsors were companies MacPaw and ITVDN.

The winners take valuable prizes from the company MacPaw such as laptop MacBook Air, helmets of virtual reality Oculus Rift, computers Raspberry Pi, and licenses for the software of CleanMyMac. Moreover, you can win gift certificates to video courses from the company ITVDN, as well as sets for cleaning of mobile devices and office equipment from the company ColorWay and, of course, the traditional crystal prize of KPI-OPEN.

The Olympiad “KPI-OPEN 2015” has anniversary. This year it takes place for the tenth time. During its participation in the competitions of young programmers took part about 788 teams and over 2500 students from 14 countries, 64 cities and 165 universities. Even this year, despite of the difficulties and crises, more than 350 students have taken part in the Olympiad. They represent 94 team 46 educational institutions from 5 countries.

Ivan Plotnikov - the initiator of the Olympiad and its permanent organizer for all years, the head of the development group of Vanopl Development Group company, said: “Two and a half thousand people with the help of this project know what is Kiev and Ukraine now. For me it is very important. And, starting this project, on the one hand, we enclosed high requirements to the level of quality of the tasks, the level of participants and so on, but even greater motivation, in order to engage of its implementation every year, was a desire to show the world that here everything is good, there are good people and we have a high quality of IT education. And very well, that “KPI-OPEN” became not only the platform where students compete, but also they find new friends with whom they have good relations in the future life”.

Certainly, as always, both rounds of competition and all events, provided by the program of the Olympiad, will take place within the walls of NTUU “KPI”.

But this year is particularly interesting because there is an anniversary of the Olympiad! There is (in the framework) art project KPI-OPEN ART STAGE: participants of the Olympiad and everyone who wants will be able to visit the jazz concerts where Alex FOKIN DJAZZ BAND will take part with DJazz, Alexey Bogolyubov (pianist), Alik Fantaev (drummer), groups of French Vibes (French lyrics under the original jazz arrangements) and the Samba Project (Latin-American music) in 2 and 3 July! According to Ivan Plotnikov, these concerts – are gift to the Olympiad on its birthday, and they will be on stage at the Center of culture and arts NTUU "KPI". Because of its facilities may be too small for everyone who wants to listen to musicians (the entrance to the concerts will be free), their performances will be broadcast on the Area of knowledge of the University, where the music to sound from the sky.

Awarding ceremony of winners of the Olympiad and its closure will take place in July 3 at 12:00 in the Auditorium of the Academic Council of the NTUU "KPI" (Prospekt Pobedy, 37, 1).

Learn more about “KPI-OPEN 2015” on the official site of the Olympiad: http://kpi-open.org.

Competitors are teams that claimed higher education institutions (HEIs). Each university may be represented by no more than two teams. Each team consists of up of three full-time students learning in the same university.No more than 100 registered teams that complete and correct execution of all registration documents and data submitted in compliance with Regulation are allowed to compete. Number of teams from NTU "KPI" is determined by the organizing committee.