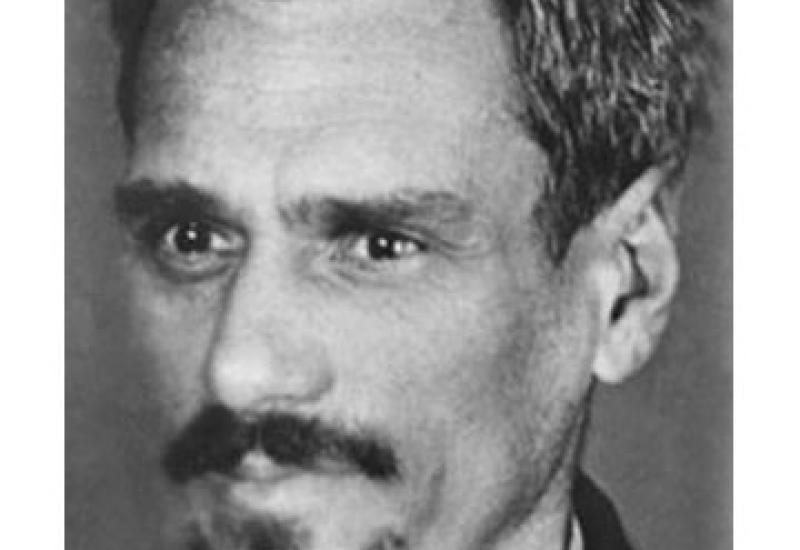 The first manned flight into space was preceded by the hard work of pioneers of astronautics - dreamers and theorists who advocated the need for space flight and theoretically justify their opportunity. One of the pioneers of astronautics was Alexander Ignatievich Shargey, better known as Yuri Vasilievich Kondratyuk, 115th anniversary since the birth is celebrated on 21 June. Almost all the proposals founded in Yu.V.Kondratyuk works which he published at his own expense in 1919 and 1927 have been implemented in practice.

In particular, it was his calculations formed the basis for the development trajectory of the flight to the moon. Alexander Ignatievich Shargey was born June 9 (June 21, New Style), 1897 in Poltava in the family Lyudmila Lvovna Shlipenbah and Gnat (Ignatius) Benediktovich Shargeya. Alexander's mother was originated from an old Swedish baron's family. It was her ancestor in the poem "Poltava" recalled Alexander Pushkin:

In 1910, 13 years old Alexander became an orphan and was brought up in a family of his grandfather - a doctor Akim Nikiticha Datsenko. In the same year he became a disciple of the Second Poltava gymnasium, from which he graduated with honors in 1916 and was enrolled at the mechanical department of Petrograd Polytechnic Institute. After studying for two months, he was drafted into the army and enrolled in the school of ensigns. Then he got to the front and up to March 1918 he fought on the Caucasian front.

When, after the October Revolution, the Tsar’s army broke up, Alexander Ignatievich went to the native Poltava. But one of the stations in Kuban he was detained by White Guard patrol and as an officer was mobilized in the White Army. Not wanting to take part in a fratricidal war, Shargey at the earliest opportunity deserted and reached Kiev, which was at that time in the hands denikin’s troops. Here again he was mobilized in the White Army, but again deserting, he settled in the town of Smela Cherkassy region.

After the civil war, the life was difficult. Shargey often moved from place to place and took up any work that could give: worked as a loader and the greaser on the railroad, a mechanic at the mill and oil, as a mechanic in a sugar factory boiler room and elevator ...

Any moment Alexander Ignatievitch as former White Guard officer could be arrested. To get rid of the feeling of constant fear of an uncertain future, he went on a desperate act.

... In Kiev on the street Saksagansky there lived stepmother Alexander Ignatievitch - Helena Petrovna Kareeva (Goberman) with her daughter. When their friend student George (Yuri) Ba-silovich Kondratuk died, stepmother gave his documents to Alexander Ignatievich. After much deliberation O.G.Shargey set on the military records as Yuri Kondratyuk, 1900 year born, the son of a high school teacher from the city Volyn.

For a long time Shargey ¬Kondratyuk worked in the south of Ukraine, Kuban, the Northern Caucasus. In particular, in 1925 he moved to the station Krylovskaya Krasnodar Territory and began working as a mechanic on the grain elevator, and two years later received an invitation to Novosibirsk to work in "BAKERY", where he took part in the construction and improvement of the elevators. That's when he constructed in Kameni¬na¬Obi his famousy elevator "Mastodon" - a huge granary at 13,000 tons, the present technological wonder.

July 30, 1930 he, along with several other employees of the "BAKERY" he was arrested on charges of sabotage. One of the charges was that he built "Mastodon" not only without drawings, but even without nails. Local management has concluded that the structure will not sustain huge quantities of grain and fall apart.

May 10, 1931 Kondratyuk was sentenced to three years in the camps (although "Mastodon" stood for more than sixty years and burned in the middle of 1990-s years). Instead of camps Yuri was held in Novosibirsk special Bureau of prisoned engineers number 14 on the design of coal enterprises. While working in the Bureau of number 14 Yu.V.Kondratyuk casually acquainted with the conditions of the competition, announced by the People's Commissariat of Heavy Industry, the design of powerful Crimean wind Power Station. Yuri made sketches, calculations led and sent them to experts. Thanks to its innovative proposal and with the assistance of the initiator of the People's Commissioner (modern - Minister) of heavy industry Sergo Ordzhonikidze Kondratyuk was employed at the services of an unusual project. In May 1933, he was in a branch of the Institute of Industrial Energy in Kharkiv, while the capital of Ukraine.

Station project was carried out in collaboration with P.K.Gorchakov, and later to the project was attracted engineer M.V.Nikitin, the future constructor of the building of Moscow State University, and the Ostankino television tower in Moscow and other prominent buildings. In 1937 on the mountain in Crimea AyPetri it was began laying the ground station, but already in 1938 it had decided to terminate the design and construction of high-power wind stations, among which was shared with M.V.Nikitin project of 12 MW wind station, with a tower height of 160 m three-bladed propeller and a diameter of 80 m. In this regard, in the next two years Kondratyuk was engaged in designing small research wind power stations in Experimental Project Wind Power Stations office.

During one of his visits to Moscow Kondratuk met with Sergei Korolev and received from him invitation to work, but refused. Work on the project envisages tight control by "authorities", and Yuri was concerned that scrutiny of his biography could discover the fact of forgery and White army past ...

June 21, 1941 Y.V. Kondratyuka was 44 years old, and a few days later, he volunteered for the front. He was enlisted as a private in the company of a telephonist communication 2th Infantry Regiment 21th Moscow division of the national militia Kiev district 33th Army Reserve Front. Later became the commander of the department and then deputy commander of a platoon of communication. February 23, 1942 Yuri Kondratyuk was killed in battle with fascist invaders near the village Krivtsovo, Bolhovskoe District, Oryol Region ...

... The idea of flying to the Moon and planets of the solar system captured Shargey Alexander during his studies at school. He began to write the book in which he began to make his first calculations and thoughts about the flights in the vastness of the universe.

In his first book, "For those who will read to build," published in 1919, he wrote: "First of all, to the question of the work, let it not scare you. Speaking about the possibility of flights implementation, just only remember that there is nothing improbable in the theoretical side of the flight on a rocket into space. "

In this work he gave the basic equation of the rocket, led diagram and description of a four missiles of oxigene fuel rocket engine combustion chamber with different combinations of locations oxidizer and fuel injectors, nozzles paraboloid and more. There has also been proposed to use the atmospheric drag to slow the rocket during its descent in order to save fuel during the flights to other planets to launch the ship into orbit, and landing on their rights and return to the ship to use compact module (this was implemented by NASA in the American program "Apollo"), use the gravitational field of celestial bodies for further acceleration or deceleration of the spacecraft to fly in the Solar System ("swing-maneuver"), the possibility of using solar energy to power the onboard systems of the spacecraft and the placing on Earth orbit large mirrors to illuminate the Earth's surface.

Only in 1920 an old issue of "Journal of aeronautics" article K.E. Tsiolkovsky on flights into space caught his eyes. How did Yuri sorry that it happened so late! "At the same time - wrote Kondratuk - I am pleased to see that not only repeat the previous study, although other methods, but also made new and important contributions to the theory."

Subsequently Kondratuk prepared for publication another book called "conquest of interplanetary space." "Glavnauka" a long time "pulling the rubber" with the question of publication of this book until Kondratuk in 1929 will not print on his own money in Novosibirsk. It has only 73 pages, 6 sheets of plans and designs, but this is the thin pamphlet brought him worldwide fame.

In this book, it was suggested sequence of the first stages of space exploration and the development of some ideas formulated in the first book.

Yuri Kondratyuk suggested that the optimum path of the rocket after its launch (the so-called "off the hook curve"), namely the vertical rise through the atmosphere and then into orbit with a certain trajectory. He considered the thermal protection of spacecraft during its movement in the atmosphere. But his main proposal was the intermediate interplanetary base with stocks of all needed for a long flight. He stressed the need to create a permanent space base in orbit around the Moon, which loads trucks deliver automatic rocket and spaceship able to replenish their stocks and continue their journey to Mars, Venus or Mercury.

Kondratuk also wrote about the possibility of the descent of the ship on the wings and develop a "space shuttle". He suggested that during the first flight to the Moon crew outer ship will consist of three persons, two of whom are using a special module to land on the moon's surface, and the third will remain in the vehicle in lunar orbit (which is what happened exactly almost forty years later).

Now memory Yu.V.Kondratyuk is respected throughout the world. It is given to a crater on the far side of the Moon, and a small planet in the solar system, as well as the track, which is moving on, the missile with a man for the first time reached the Moon. In Kiev, the street is named after him, in Poltava there is his monument, and his name was given to Poltava National Technical University. There is a medal Y. Kondratyuk, there were issued a commemorative coin and two stamps. In the Russian Federation there is a street named after him in Moscow and Novosibirsk area, in the village of October Krylovskogo region Krasnodarsk region it was opened "Memorial Museum of Y. Kondratyuk." Americans who believe Kondratyuk ancestor of the space age, at Cape Canaveral set a monument to him. And on the day of his birthday - June 21, 2012 – home page of the popular search engine on the Internet, Google has been devoted Yu.V.Kondratyuk.