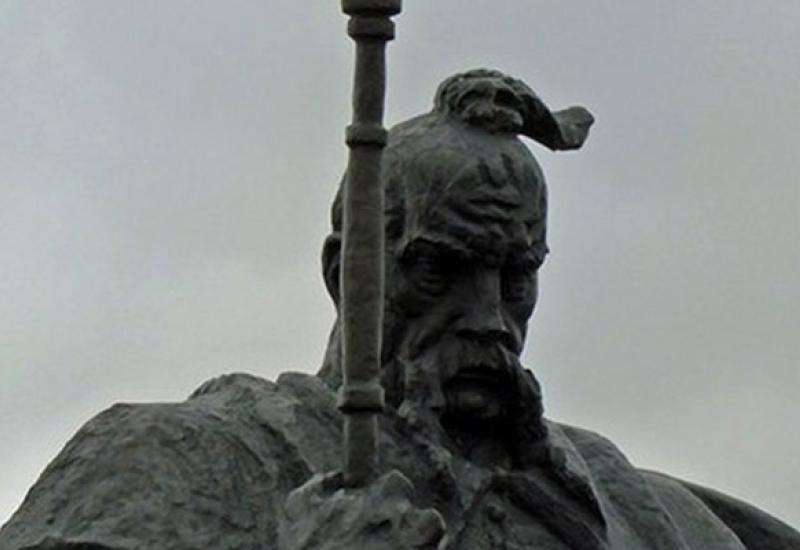 June 4, 1775, by order of Empress Catherine II Russian troops occupied Zaporizhian Sich. On the second day, on the orders of a tsarist general Tekeli an ammunition, Cossack Regalia, wealth and archive of Zaporozhye military office were took away. Cossack ataman Peter Kalnyshevsky, military clerk Ivan Globa and military judge Golovaty Pavel were arrested in a tent Tekeli and shackled. June 10, 1776 by decree of Catherine II at number 1419 last ataman P. Kalnyshevsky under protection of 7 guards was sent to eternal exile in the Solovetsky monastery for "perfidious riot and ruin of Russian citizens."

Most researchers believe that the P. Kalnyshevsky was born in 20 June, 1690. First time he was remembered in the documents as the military of Captain in 1750. In May 1755 P. Kalnyshevsky was included in the deputation Zaporizhian Army and sent to St. Petersburg. The envoys sought to overturn duties on goods imported in Zaporozhye, as well as an increase in the annual fee Zaporizhian Army. Stay of the deputation in St. Petersburg lasted for over a year. Each of these questions has caused lengthy bureaucratic red tape and endless correspondence. 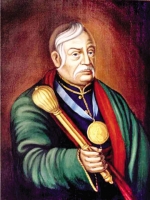 In 1757 P. Kalnyshevsky second time was appointed as the Captain, and in 1758 he was elected a military judge. He became the Ataman in 1762 at the age of 72 years and was in office less than a year. In 1765, P. Kalnyshevsky was reelected as the Ataman and remained so until the destruction of Zaporizhjan Sich in 1775.

The Russian government has sought to maximize the use of Cossacks in military operations against Turkey, in particular, in the war of 1768-1774. Ataman, who in 1768 at the beginning of the war, was 78 years old, and at its end - 84 years old, showed himself a talented commander. January 5, 1771 Catherine II issued a decree that "For the excellent in the past and present achievements against the enemy concessions and especially for his zeal for service» P.Kalnyshevsky was awarded gold medal, decorated with diamonds, with his own portrait. This medal should have worn around the neck on St. Andrew's tape. Another 16 Zaporozhian foremen received gold medals worth 30 ducats without diamonds.

During the war with Turkey Ukrainian Cossacks were so famous for their courage and military prowess that many of the Russian officers and officials considered it an honor to enroll in one of the 38 Cossack detachements. The Count Panin and Prince Prozorovsky were the first ones, later - astronomer Euler, in 1772 - Favorite Empress Lieutenant-General Potemkin. According to the old Cossack tradition he was named a new nickname - Gritsko Neches (for a large shaggy white wig).

Kucuk Kainarji agreement between Russia and Turkey July 10, 1774 ended the war and became an another impetus for the tsarist regime in the implementation of the death penalty to Zaporizhzhian Sich. Top Russian government officials P.Rumyantsev, M.Panin, Potemkin thought that Zaporozhye as a bulwark against the Turkish-Tatar expansion became unnecessary. And according to the Empress Catherine II, the existence in the rear of the empire Zaporizhzhian Sich was too dangerous for the monarchy. The Empress did not forget either the fact that during the Peasants' War, led by O.Pugachev, Zaporozhye supported the rebels and many of its members have taken refuge at the camp.

To eliminate the Zaporizhzhya Sich there were used the troops under the command of General Tekeli in total of more than 100,000 people, returning from the Russian-Turkish war. Tsarist troops quickly took Zaporozhye, to a certain extent because of the surprise attack, as well as the small number of Sich defenders. Most of the Cossacks at the time went home or went to the crafts. Moreover, the ataman P. Kalnyshevsky did not want to spill the blood of the Cossacks, holding back the Cossacks, not allowed to open the arsenal, where guns, gunpowder, bullets and other weapons were kept.

Even close relatives could not find out the tragic fate of the former Zaporozhye leaders. Only much later, after almost a century, researchers have found that P.Kalnyshevsky was exiled to the Solovetsky Monastery, military clerk Globa - in Turukhansky and military judge Golovaty - Tobolsk Monastery. Last ataman Cossacks was held a quarter of a century in inhuman conditions, he was in fact alive immured in a stone bag. Only three times a year - at Easter, Christmas and Transfiguration – he was taken out of his cell.

In 1801, Alexander II became a new Russian czar. It was declared a general amnesty, however, the 110-year-old P. Kalnyshevsky refused to leave the monastery, pointing to the "request" to the royal name: "... I can not dare to go his way so far away, and decided to devote the rest of my days serving the one God in this blissful solitude, which for twenty-five years, I finally got used to ... ".

P. Kalnyshevsky died in the 113th year of his life on October 31, 1803. He was buried near the Holy Transfiguration Cathedral of the Solovetsky monastery.