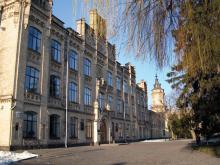 Building of the primary bulk wall and two towers of the building of KPI was completed in the end of 1899. While compiling the authority by manager of work I. Kitner, in the  2 June 1900 was noted, that in the main building over all brick exterior work (excluding balconies around the tower), erected arches, installed roofs; decoration work in the rooms, grand staircase, water supply equipment and heating remained unfinished.

In autumn 1900 the workers of the Berlin company "David Grove" implemented steam heating equipment and ventilation systems, for which steam was supplied from the boiler department of mechanical building workshops through the brick tunnel. During the 1st World War building used for defense purposes. In 1930-s from the east side was build on energywing in simplified architectural forms. In 1970-80-s conducted repair and restoration work: clearing brickwork facades, installation of granite floors and more.

The main building was designed to accommodate the three departments of the Institute: mechanical, engineering and agriculture. The last occupied the first floor of the western part of the building, to which was attached metallic glazed conservatory at the rear (not preserved). From the rear to the building centre adjacent the volume with the assembly hall and two wings with classrooms and drawing rooms of mechanical and engineering departments. In the east wing of the main façade was arranged a great physical audience in the center of the facade on the second floor – located a library (up to 1979).

Two-three storey building with basements. Constructive basis consists of spandril brick walls, vaults (in lobbies, corridors, basements) and сovering slabs on the metal and wooden beams, in the large rooms – reflected ceilings. Foundation and basemen are made from the gnivanskiy granite, hipped ant tent roofs ( in the towers)  with metal coverings made by wooden rafters and farms. The total length of the facade - about 260 m, building area - 1947.4 sq. fathoms (8,666 sq. m), floor area - 4710, 6 square. yards (20,962 sq. m).

By the scheme the plan has symmetrical difficult P-shaped outline with open yards. Before the main entrance formed front court of honour. Internal planning is corridor, dominating with the unilateral arrangement of the spaces. Except the main entrance connected with the grant three-flight stair on the main façade, there is another exit under the physical audience.   Communication between floors provide ten staircases.

Finishing of facades is made in the brick style with the inclusion of elements of Roman- Gothic architecture, interpreted rationally and peculiar. Walls – in the open brickwork in the light yellow tones, base – from the crushed gray granite. Composition of the front façade is almost symmetrical with a slightly longer northeastern wing. The central part is singularized by risalit with the storeyed entrance portal and stepped pliers, with inscription:  "Kyiv Polytechnic Institute". Overarched with the pliers risalits, also arranged on the northeastern and northwestern wings. Entrance under the physical audience decorated by the projected vestibule portal. Inner corner of the front yard underlined with faceted towers, intended for scientific observations which ended by high tents with a weathervane. Architecturally designed rear and side facades. The leading role in forming the image of the building play characteristic for that time educational institutions, large window embrasures with bow lintel.  Arched openings is used for the allocation of entrances and  large rooms. Brick architectural decoration consists of the interfenestral blades, developed denticulated eave, ornamented window sills. Bravery provides to the silhouette stepped tongs, embellished with decorative triangular completion, rose-windows and faceted in cross by hinged columns.

Decoration of ceremonial rooms made in Roman- Renaissance style with the use of modeling, artificial and natural stone. Located in the center main lobby one floor height, offset against the nine cruciform arches, with ornamental spiral saddle-backed complexes and keystones. Supporting arches bear against the four massive pylons, to which fit pilasters on the area of the walls. Corner of pylons is decorated with graceful fluted columns with the Romanesque plant column caps, its area - curly-depth panels. At the level of the column caps, where frieze line is located, which  is composed of motive cruciferous (pylons, pilasters) and guillochos (walls) above the floor - clearly marked plinth part. In rusticated area of the aisle walls contrast a smooth mirrors, with curly cornerstones parts, framed of coronary Archivolt - relief decorative rondo filled with geometric and floral stucco ornament. Granite floors was layed 1970-80 –s (Instead of the original mosaic from the artificial stone).

On the axis of the lobby is located ceremonial three-section stair with massive fence from the artificial stone. Figure rail includes fish- blisters motive inscribed in a laced circles. An unusual feature in the decoration of stairs is placed on the lower area of marches is Romanesque stucco ornament. Central flight of stairs leads to the intermediate landing, from which begin aisles into the assembly hall. The wall of the aisles is rusticated on the second tier above them arranged connected with hall choir room (loggia).

Architectural characteristic of other ceremonial rooms of the main building are distinguished not so much decorative as design details. Very expressive corridors suite determines equal rhythm of cruciform fornications on profiled impost. The interiors of the lobby under the Physical audiences and halls under the assembly hall (now buffet) decorated with cruciform fornications, based on supported arches. For architectural and artistic qualities, the main building of KPI is one of the best construction in Kyiv for educational purposes from the end of  19th - early 20th century. Student’s lessons started in 1899, in some rooms of the unfinished building, in 1900-01 three departments of the university was transferred here, office and library. 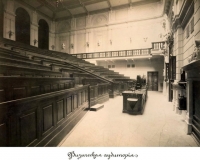 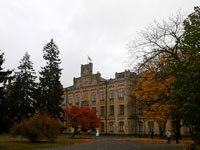 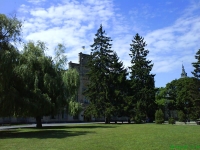 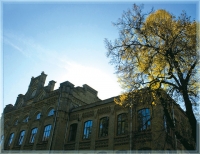