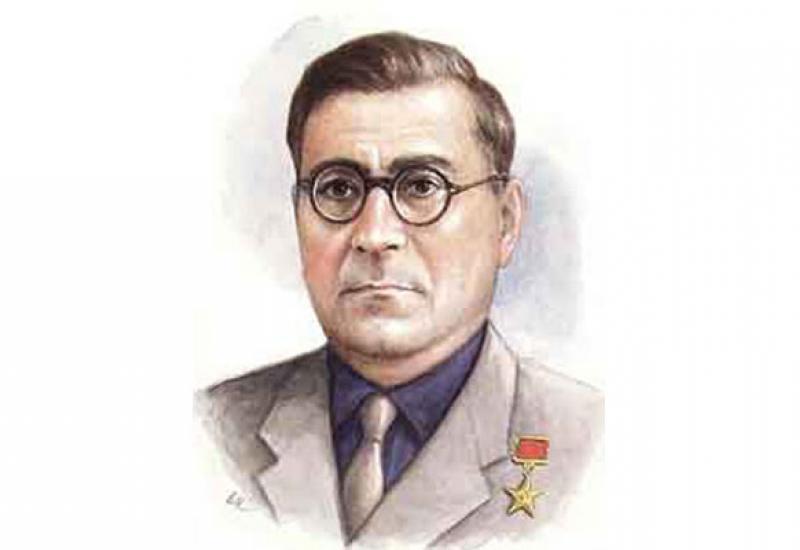 Olexander Heorhiovych Ivchenko is a famous aircraft engine engineer that established his own school of aircraft engine production and united professional of the highest rank. He is a legend, who changed our world for the better.  He is an academician of NAS of Ukraine, holder of the Lenin and Stalin National awards, PhD in science, a Hero of the Socialism.

He was born on 23 November, 1903 in Velykiy Tolmak in Zaporischya oblast. When he was a child he loved engineering that is why his studying in Charkiv Mechanical-engineering institute in 1930-1935 was successful. Nowadays it is a Charkiv Politechnic Institute.

His work on a engine producing plant in Zaporischya influenced his future as an engineer. His part in modification of the engine M-88, when he among with his colleagues found a solution that made the engine much better and allowed its further production. That was the engine our aviation needed. A message by commander-in-chief to Stalin confirms it. It says: ‘…if you really wish to help the Red army, guarantee the production of M-88’.

In the years of WW2 the plant that was evacuated to Omsk produced more than 27 000 engines for military needs. Among them more than 10000 were M-88. It was one of the four engines our aviation worked on.

During the period from 1945 to 1968 was designed and implemented in the national economy with the latest technology the highest quality, including a family of piston and gas turbine aircraft engines for aircraft and helicopters, including for the first Soviet Mi-1, Ka-10, Ka-15 and others. For the development of a series of engines AI-26 helicopters for domestic in 1948 Alexander Ivchenko was awarded Stalin (State) Award.

Engines of a new type AI-20 were created for aircrafts AN. Collaboration with Alexander Ivchenko with an outstanding aircraft designer Oleg Konstantinovich Antonov started in 1948 and has been especially fruitful. As Academician Boris Paton noted, "outgo to the airways of each machine marked a serious new advance in science and technology. All our design and technology decisions are taken based on actual needs of the economy ... bright, full of creativity, overcoming many difficulties and obstacles lives of two outstanding scientists are an example of devoted service to the Fatherland. "

Significant service life had a family of powerful turboprop aircraft gas turbine engines for passenger transport and amphibious aircraft AN-10, AN-12, AN-24 and IL-18. The first in the Soviet Union Turbofan turbojet engine AI-25, built on the principle of action proposed in 1941 by an outstanding graduate of the Kiev Polytechnic Arkhip Lulka was created for Zaporizhzhya Yak-40.
In 1960, for participating in the creation of the IL-18 with engines AI-20 Alexander Ivchenko as part of the Authors gets the Lenin Prize. In 1962, on the set of the executed works, Alexander Ivchenko defended his doctoral thesis and was elected Academician of the Academy of Sciences. In 1963, prominent designer conferred the title of Hero of Socialist Labor.

Another focus of the Zaporozhian engine builders became established by Alexander Ivchenko program that was designed to carry aircraft technology to ground-based applications. This program began with the creation of large-scale industrial production chainsaw "Friendship". Then the jet engines were first modified for use in the oil and gas industry, in extinguishing fires and so on.

June 30, 1968 the outstanding designer died. Stroke responded to the disaster of a liner IL-18 in Kyiv region, which occurred on August 17, 1960 and which Alexander Heorhiyovich experienced particularly difficult. And although the engine design was found deficiencies for what happened, he took responsibility.
Academician Boris Paton during my conversation with him on the eve of the scientific readings, in particular recalled that in 2014, we are approaching the 100th anniversary of the birth of the direct continuator of Alexander Ivchenko - Vladimir Lotarova, Hero of Socialist Labor, academician, laureate of Lenin and two State Prizes. I was particularly impressed by two aspects of memories of  Borys Paton. First, it is his personal phenomenal memory - because during his life he spoke he knew a huge number of people to the characteristics of which rightfully can add the word "outstanding." Second, among the variety of outstanding individuals he identified the anniversary of academician Lotarev, indicating a particularly praised work and deep personal respect for the President of NAS of Ukraine's chief designer. Vladimir worked side by side with Alexander Ivchenko since the 40s. His colleagues noted a unique combination of talent with dedication. One of the designers, V.Ananyev, in particular recalled: "any engineer and designer meets difficulties, that can only be solved after research. Correctness of choice direction of the study, minimizing of the experimental researches characterized Vladimir Alekseevich Lotarev work. "

With the participation of Vladimir Lotarev a large number of reciprocating and turbine engines for aircraft and helicopters, launching aircraft engines, gas turbine engines powerful turboprop great resource conditions, in particular for such aircraft as the An-24, Il-18, Yak-40 and others were created. He is one of the founders of aircraft engines to the biggest cargo aircraft in the world An-124 "Ruslan", AN-225 "Mriya" and the world's largest helicopter Mi-26. Aviation giant An-124 "Ruslan" is internationally recognized as the joint brainchild of two constructor offices in Kiev and Odessa. By the way, for comparison - power turbines on four engines D18T "Ruslan" have the power of the Dnieper energy station. It took several decades, technological advances and "Ruslan"  shocks the contemporaries. And as the highest recognition of the fact that the school chief designer Alexander Ivchenko always worked to advance is made ​​recent decision of the Government of Russia and Ukraine on joint recovery in 2014, serial production aircraft "Ruslan".

AN-225 "Mriya" is the largest and most powerful in the world transport aircraft, created in  Kyiv by a construction office of Antonov. On December 21, 2013 was the 25th anniversary of its first flight in 1988. The first commander of the legendary plane test pilot Alexander Halunenko to mark this date is noted that "for Ukraine would be prestigious to have several "Mriyas. "In November 2004, the International Federation of Aeronautics included AN-225 to Guinness Book of Records for its 240 records.

Traditions of design schools of Oleksandr Ivchenko after Vladimir Lotarov were successfully continued by an outstanding designer of aircraft engines Corresponding Member of NAS of Ukraine, Doctor of Sciences, Hero of Ukraine Fyodor Muravchenko. Working for decades along with by Alexander Ivchenko, Fyodor directly ensured the achievement of competitive parameters aircraft engine AI-20, for the first time in the Soviet Union created an air system run turbine engines, as well as original aircraft engine combustion chamber. Under his direct supervision on behalf of Alexander Ivchenko work on the use of aircraft engines that have exhausted their resources in the air was conducted. With the direct participation of Fyodor D18T engine created for the AN-124 "Ruslan". As chief designer construction office "Progress" he managed to keep the scientific and technical potential and  "Progress" in extremely difficult conditions for an independent Ukraine inadequate state support for its state enterprises. The new aircraft engines were the An-140, Tu-334, Be-200, An-70 (engine of the 5th generation). At the initiative of the Government of Ukraine Fyodor by his resolution appropriated Design Bureau "Progress" name of academician A. Ivchenko and 1997 engines are created in the design office, again began to receive corporate code AI. Important role in maintaining aircraft potential of Ukraine play combined efforts CB "Ivchenko-Progress" and JSC "Motor Sich" within established corporations - Scientific and Production Association "Ivchenko."

In 2003, the world community celebrated the 100th anniversary of world aviation, launched December 17, 1903 the first manned flight of the Wright brothers. On the initiative of "Ivchenko-Progress" Association "Union of Aviation engine" (Moscow) declared 2003 as the year of academic Ivchenko.
November 23, 2013 the team CB "Ivchenko-Progress" celebrated the 110th anniversary of its founder. The presentations of chief designer Igor F. Kravchenko, regional leaders and the city was noted that the school air engine Alexandra Ivchenko covers research, design, research, production aspects of new aircraft engines and today has hundreds of designers and workers who continue the glorious history of the domestic aircraft industry.

In 2009, a monument to the founder of the school of aeronautics near the Bureau "Progress" was made. Thanks to the initiative and efforts of the daughter of the prominent designer Natalia A. Ivchenko on the eve of the 110th anniversary from the birth of Alexander Ivchenko in Tokmak opened a monument famous man, whose name is written in golden letters in the history of world aviation.

M. Ilchenko, Academician of NAS of Ukraine (From a Scientific Readings of the cycle "The outstanding designers of Ukraine" 10.12.2013r.)
Translator: Роздорожня А. ЛА-11