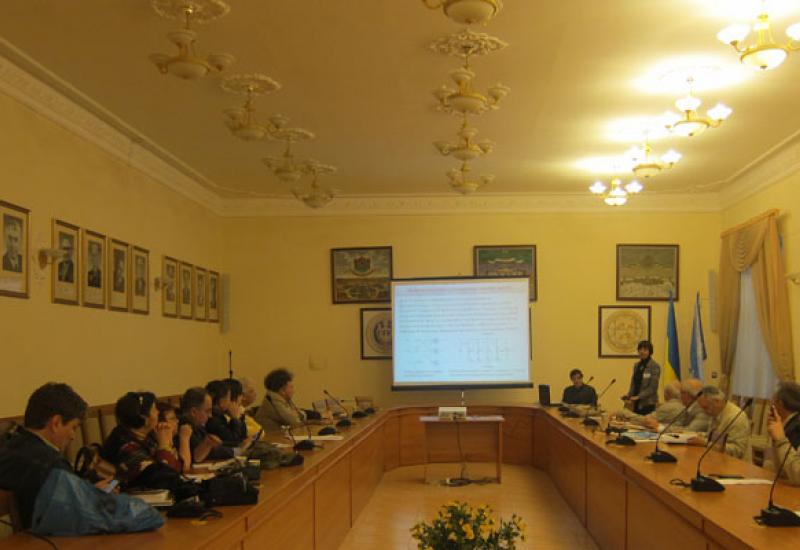 Forty-six theses were submitted to the conference. This year’s participants came from such countries as Ukraine (Kyiv, Kharkiv, Odessa, Pokrovsk, Khmelnytsky, Lviv), Russia (Moscow, Samara, Orel; 4 theses), Belarus (Minsk, Gomel; 2 theses), and Bulgaria (Sofia; 1 thesis). Researchers from our university submitted 17 theses, 6 of them by AMD representatives, 2 of them by members of other FoAM departments. A pleasant observation is that 15 theses were submitted by young researchers, 8 of which without co-authors.

The Program committee co-chair, Head of the Applied Mathematics Department O. Chertov opened the conference. In his opening remarks, he expressed genuine satisfaction that in such dark times that Ukraine undergoes, it is possible to find common ground between intellectual elites of Ukraine and Russia regardless of political differences. As E. M. Remarque neatly pointed out, “In dark times, light people are well-noticeable.” Without a doubt, all IAI participants are light people by virtue of their personalities.

During the conference, talks were given that shed light on topical achievements of scientific groups of O. Kuznetsov (Russia), Yu. Valkman, V. Golenkov (Belarus), D. Lande, A. Snarskii, E. Ivohin.

In his closing remarks, the Program committee co-chair, Head of the Scientific Council of the Russian Association for Artificial Intelligence O. Kuznetsov emphasized that the intimate circle of permanent conference participants facilitates communication in natural atmosphere. Each talk presented gets a fair share of attention, and discussion remains at high scientific level.

Organizing committee hopes that the honorable tradition of friendly meetings for discussing topical problems in the field of intelligent analysis of information will persist.