1898-1904: Classes start at the institute - the material base and organizational structure 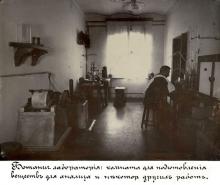 Classes at the institute began September 1, 1898 [6, p. 4] in a room built for commercial school (st. Vorovsky, 24), which in the year was rented by Institute. By the beginning of the next school year chemical pavilion and mechanical workshops have already been built. Here, as well as in some areas of the unfinished main building classes were conducted without interruption [7, p. 12]. After completion of construction (April 1902) [2, p. 485] the Institute has a full range of buildings: the main building, which housed engineering, mechanical and agronomic departments, chancellery, the fundamental scientific and technical library. The organizer of the latter was an outstanding scientist, a specialist in ethnography, art and architecture, and later (from 1919), Academician of Ukrainian Academy of Sciences M.F.Bilyashivsky. During his tenure (1898-1902), the library was equipped with the necessary scientific and pedagogical literature, and communication, which he tied up with domestic and foreign publishing houses, provided constant replenishment of library collections with new acquisitions.

The chemical building housed chemical department; there were mechanical workshops with central power station for lighting and heating of the buildings of the main building, the building for experiences, housing for professors and technicians, student dining [2, p. 460]. There were located in these building the following necessary training and support services: Chemical Laboratory, Laboratory of Chemical Technology and Metallurgy, physical classrooms and laboratories, mechanical rooms and laboratories for the study of materials, the station for testing of steam and other machines, workshop, office equipment and models of Geodesy and building, laboratory and office agriculture and animal science, cabinets of zoology, botany, geology and mineralogy of Forestry, weather station. Teachers and students equipped a yard for cattle farm, prepared an experimental field and planted a garden [8, p. 3].

Established material base completely satisfied the educational process and scientific research, carried out at the Institute. Mendeleev, who led the Commission of state exams in 1903 the first graduates of the KPI, had the opportunity to thoroughly acquainted with the state of scientific and teaching work at the institute, its material and educational and industrial base, laboratories and equipment. In a memorandum to the Ministry of Finance Mendeleev wrote: "... I have seen most of the best laboratories in Western Europe, not to mention the Russian laboratories of higher education institutions. I believe that laboratories, offices and workshops of the Kiev Polytechnic stand out among all I had seen, not only by modern equipment, but also by variety of improvements in devices intended for student activities. This is particularly noteworthy "[9, p. 159].

It should be noted that the engineering department, opened in one time with others, received organizational independence much later. First, the Council of the Institute led it, and later, for almost two years, the dean of mechanical separation concurrently served as dean of the Engineering Branch. All this adversely affected its work as delayed laboratory equipment, recruitment. At the undergraduate some subjects have not been taught (course bridges, local roads, building materials technology) or setting out irregularly, intermittently (course Geodesy and others.) It caused the concern of the Council of the Institute. In 1904, a commission was established, which identified the causes of deficiencies in the office. According to its content, 22 May, 1904, Council of the Institute issued a special decree, which clearly defines the status as an independent faculty of the faculty for training railway engineers [12, p. 34]. Department was headed by prof. D.P. Ruzsky. Were strengthened The faculty teaching staff was strengthened, experienced teachers, professors V.L.Kirpichev, V.V. Perminov, EA Paton started work here. In 1906, E.A. Paton became its dean. The state of affairs in the department has improved significantly [12, p. 34], its graduates - civil engineers of ways - quickly established themselves as good specialists in the production. [12, p. 35.].

According to the regulations of the KPI (1898), there were established 35 departments to cover all subjects at the institute. There were: mathematics – two, theoretical mechanics - one, applied mechanics – four, mechanical technology – three, physics – one, electrical - one, the art of building and architecture - six, chemistry - three, chemical technology – three, technology building materials – one, metallurgy – one, zoology – one, botany - one agriculture - two, livestock – two, agricultural technology and statistics – one, geology and mineralogy - one, political economy and statistics - one [13].