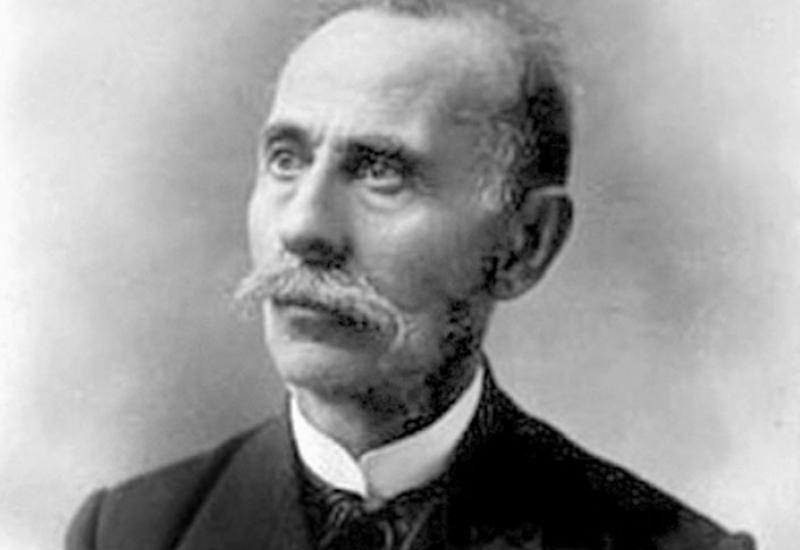 The annexation of Crimea especially painful affected the Crimean Tatar people. Course of their resettlement in father's land and integration into Ukrainian society was brutally crossed by occupation authorities, which started with zeal to fight against the revival of their historical memory. One of the most striking examples of this was the ban on Simferopol commemorative celebrations of the 70th anniversary of his deportation. However, history shows that under such conditions, people's willingness to defend their national dignity and rights only rises. And the interest in the outstanding compatriots grows as well, especially those who have made a significant contribution to the development of national self-consciousness. For Crimean Tatars one of such persons is a prominent enlightener Ismail Gasprinskiy, whose centenary anniversary of the death will be celebrated this year at the beginning of September.

The name of Ismail-bey Mustafa-oğlu Gasprinskiy (8.03.1851–11.09.1914) became for Crimean Tatars a symbol of revival of Turkism, a sign of changes, rejection of old dogmas and stereotypes. I. Gasprinskiy was one of the most well-known educators and reformers of the late XIX – early XX century. His ideas has influenced the preparation and carrying out reforms in the national school, the development of problems of his home school and creation of the first national textbooks. Enlightenment pioneer of Crimean Tatars and their leader, I. Gasprinskiy dedicated his life to the unification of traditional spirituality with the advanced achievements of European culture. Thanks to that fact, he earned deserved reputation among all the Islamic peoples of the Russian Empire and the Near and Middle East.

The end of the 1860s was the time when, after series of defeats suffered by East peoples because of European colonizers, the idea of ​​the importance of education, the need to update the public and spiritual life began to take root in the Muslim world. A sense of national dignity began to revive in the society and the idea of deploying a broad anti-colonial struggle was spreading. Such sentiments led to the appearance of a new type of leaders who, having knowledge of the West, remained faithful to the traditions of their people. One of these leaders was I. Gasprinskiy, whose commitment to the culture, language and religion of his people organically combined with the desire to learn all the wealth of European and Russian culture.

To expand his cultural horizons in 1871 Ismail travels to Paris, where the uprising of the Communards recently took place and the city was slowly starting to recover from defeat in the Franco-Prussian War. In spite of that, Paris retained the status of European Capital of Culture. Besides, Paris, which was often and for a long time a settlement for Muslim enlighteners from the Mediterranean countries, in the last third of the XIX century transformed into a kind of meeting place of Eastern and Western cultures. All this made it even more attractive to I. Gasprinskiy. A trip to the capital of France has enabled the young Crimean Tatar intellectual not only to become acquainted with the latest achievements of Western civilization, but also understand the global scale of Muslim enlightenment movement that took place in the context of the synthesis of Eastern spirituality with Western scientific, technical and cultural achievements. At that time Gasprinskiy realized that Egypt became the center of the Muslim revival, level of economy and education of which significantly improved thanks to the reforms of the ruler Mohammed Ali. So I. Gasprinskiy spends a few months in 1874-1875 in Cairo.

The experience gained during the French and Egyptian travels, largely determined the value priorities and future life path of Ismail Gasprinskiy. Impressions from trips formed the basis of some of his literary works. Ismail become firmly convinced of a deep faith, to which showing off and narrow clericalism was alien. Right after travels around the Europe, he came up with idea about the need for radical reforms of the spiritual life of Muslims that would be based on a combination of scientific and technical progress and maintaining updated Christian religious principles of Islamic nations.

These ideas I. Gasprinskiy started to realise above all when developing and introducing a new system of school education – first for the Muslims of Crimea and later in other regions of the Russian Empire. The new education system included familiarization of students with the fundamentals of Russian and European cultures, instilled skills of tolerance and religious tolerance, knowledge and respect for science.

Ismail Gasprinskiy as a Muslim and a patriot of his people stood at the cradle and was directly involved in general Islamic and Turkic movements that originated in the Russian Empire in the late XIX century. However, his outlook was much wider than most confessionally and ethnically restricted members of these movements. He avoided any form of nationalism and clericalism and believed that the rise of the cultural level of the people must be based on the restoration of its traditional spirituality through education among the masses. Traditions must be preserved, especially since, as Gasprinskiy thought, not everything should be adopted from Europe – it is the synthesis of national culture and advanced achievements of Western civilization that is really important. And the renunciation of its roots would be fatal. The contradictions between East and West I. Gasprinskiy wanted to remove combining Western learning and civility with Eastern spirituality based on Islam. He wrote: "A powerful, ebullient West with its billions and broad knowledge, heathen East that awakens, with its innumerable population could squeeze us like a vise, if we do not hurry to come together, enlighten and develop the full extent of working capacity and productivity."

Young Ismail took an active part in the public life of his native city. After returning from Egypt he was elected as a member of Bakhchisaray City Council and in 1876 as City Mayor of Bakhchisaray. He held this position until 1884 and carried out several major reforms. He managed to almost triple the budget of the city and start a substantial transformation in the urban economy. Staying within the framework of the existing law base he achieved from the Ministry of Internal Affairs of the Russian Empire an increase of the quota of Crimean Tatar representation in local government, which had been restricted by law. He cared about the sanitary conditions and the development of public education in Bakhchisaray and so on.

Understanding that the basis of the outlook is laid in childhood, Ismail writes and publishes in his own edition numerous textbooks and books designed for young readers in Crimean Tatar language. Gasprinskiy’s publications were in tune with the time and became widely popular in the community. In particular, his textbook "Hodge-and-subyan" ("The teacher of children") was repeatedly republished and became the most popular publication in the Turkic world.

The issue of implementation of the famous sound method, creation of the neo-method (secular) schools is a central part in the publication of the Teacher of teachers, who constantly assured his readers that the Koran and education "does not interfere with each other, as many Muslims believe but vice versa." Gasprinskiy had to convince not only his co-religionists but also "respected scientists" who believed that "the media in the hands of ignorant Tartar clergy served and continues to be an instrument of support and propagation of religious, moral and domestic obscurantism among poor Tatar common people."

I. Gasprinskiy’s writing talent that most fully revealed in the last quarter of the XIX century, which made him the patriarch of the new Crimean Tatar literature. He wrote a story "African Letters," a novel in the epistolary genre "The Letters of Molly Abbas to Frans", a historical narrative "A lioness girl", a mystical novel "Woe of the East", "French letters", "The sun had risen" and other literary works. Later Gasprinskiy disclosed in the genre of political essays – at the beginning of XX century his essays have been published in two collections – "Russian Islam" and "Russian-Eastern agreement". In general creative heritage of enlightener has dozens of literary and thousands of publicistic works.

I. Gasprinskyi was also actively engaged in scientific work, particularly in the areas of history, ethnography and written culture of his people. In 1887 he enters the organization of scientific and local history of the Crimea – Tauride provincial archival research committee, where he performed considerable work on the search and study of literary works of medieval Muslim Crimea.

However, his major efforts during all his life Ismail directed to release Crimean Tatar periodicals.

In 1883 I. Gasprinskiy organizes and edits the bilingual edition (Crimean Tatar and Russian) of the newspaper "Terdzhyman translator" in Bakhchisaray. It was the first and for many years was the only newspaper in Turkic language in the Russian Empire. Newspaper lasted 35 years and was regularly published until April 1918.

Starting with the first issue of "Terdzhyman", the newspaper was in great demand. The materials of the newspaper were devoted to the problems of Muslims of Crimea and the whole empire and to events of Russian and world's political and cultural life. This newspaper became "a window to the world" for the Crimean Tatars and other Turkic peoples of the empire in the Volga region, Transcaucasia and Central Asia. It was distributed to Turkey and even to East Turkestan controlled by China. The materials from newspaper were actively used by Turkish press.

"Terdzhyman" opened a world of culture to a new generation of Crimean Tatars, eager to intellectual education and creativity. The newspaper was the starting point of the literary way of such writers known in the first third of the XX century (later the authorities tried to artificially erase them from human memory) as Osman Argokrakali, Memet Nuzet, Yakup Shakir-Ali, Shamil Tohtorgazi, Obiyakim Ilmay, Asan Sabri Ayvazov, Ismail Lyatifzade, Seit Abdullah Ozenbashli.

Gasprinskiy was tolerant to his ideological opponents from all camps. Being spiritually significantly higher than most of his compatriots, to a certain extent enlightener was always ready for a reasonable compromises but at the same time he never gave up the most important principles of humanity and education, love for his people and openness to the entire advanced in Western, Ukrainian, Russian or any other culture.

His work laid the foundation of democratic tradition in Crimean Tatar national movement. The impulse given by him has received a new stage of development today when much of the Crimean Tatars after decades of exile was able to return to their homeland and begin to build a new life.