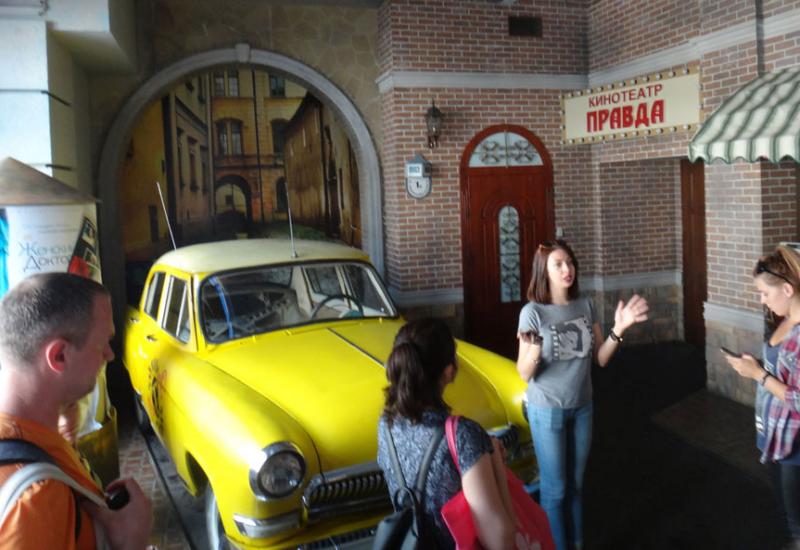 The second Sunday of September celebrates Day of Ukrainian cinema. On this occasion in the studio complex on Troyeschina Film.ua held open house. We visited there Polytechnic. Film.ua Production - Production company produces full-length movies, TV serials and shows for television. Filmed here, including "X-Factor", "Ukraine's Got Talent," "Evening Kyiv", etc., They create magic, illusion, which enthusiastically "consume" millions of viewers. Currently in production are about 30 projects of various genres for different media and audiences.

In an area of 3 hectares are shooting pavilions, an area for several hundred meters each; studios, cinema, make-up, composition props, wardrobe (50 thousand. pieces of clothing), playground vintage car (all "on the move"), areas for recreation, various services, etc.. You can get here on tour or in the various events that take place several times a week.
And visitors show a full-scale scenery for the movie "mortgage watchdog." Mock castles - not surprising for young people, but visitors gladly inspect all the corner of a wooden structure, discussing how it is done and how reliably. Probably, reliably, because about a hundred tourists that afternoon September 10 "besieged" fortifications, even created a crowd so large is the area of the citadel.

Film fantasy, as experts say, will be released soon. This is the story of a schoolboy Vitya which of the XXI century. through the portal of time enters the Kievan Rus. Begins its journey filled with adventure, danger of death, black magic, meeting new friends, heroes, young Oleshko, powerful and Elijah strict Dobrynia - all accompanied by stunning visual effects. The guy is in the midst of incredible events, enters the battle with mythical creatures shows with friends miracles of bravery.

Another film, which say - series "Red Queen", as demonstrated on Amazon. The story is based on facts biography of the famous Soviet mannequins Regina Zbarskoyi. Its called "Soviet Sophia Loren" and "beautiful weapon the Kremlin." She admired Cardin, Dior and Fellini. But who really was this proud beauty? Massive removed dramatic story of a faithful Dost scenery with beautiful costumes that recreate the atmosphere of 60-70 years of the twentieth century, judging by the number of hits, the audience liked.

The complex spend a lot of educational and artistic activities, which invited all comers. In acute program - participation in the festival short films "Where the movie" which will be held at three venues September 30 - October 1. Organizers promise many movies for children and adults, food, workshops, various activities and excursions. They say even a movie you can rent and view it in a real movie theater. Admission is free, the subway will run buses. And yet, experts talk about the quest-room, which is also interesting to get.