Read Euler - he is the master of us all! The man who was destined to become a great mathematician 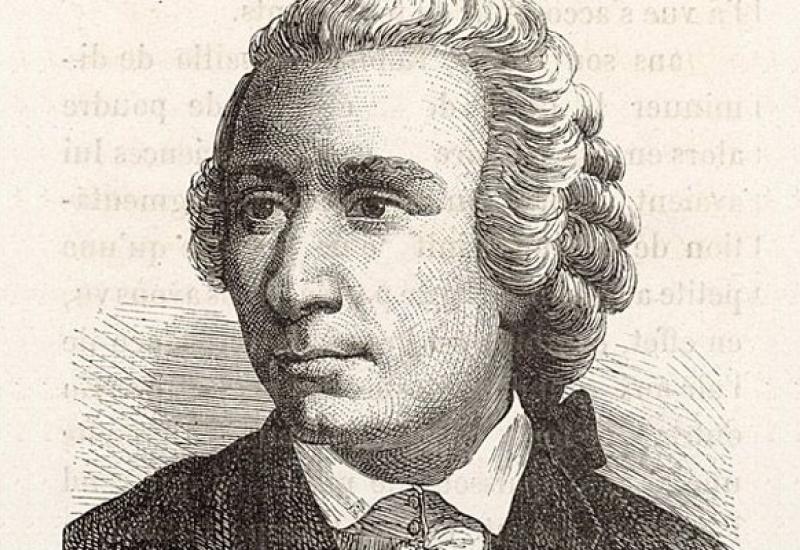 Leonhard Euler is considered to be the most prolific mathematician of all time. He wrote his treatises in a simple manner, clearly and plainly, as a man of pen and ink writes letters to his friends. Even the total loss of vision, during the last 17 years of his life, did not constrain his creative effort. After all, Euler's perception of the inner world of mathematics had just sharpened.

During his academic career the scientist wrote about 880 works and the variety of multivolume monographs among them. About 30 years of his prolific academic career Euler devoted to the Imperial Russian Academy of Sciences in Saint Petersburg. He left behind many outstanding works on different branches of mathematics, mechanics, physics, astronomy, applied science. However, he is known primarily as a mathematician.

Leonhard Euler is the most prominent scientist from those who come from Switzerland. He was born in Basel, on the 15th of April, 1707. Having received his first schooling at home, Leonhard was sent to the Latin school in his hometown and after finishing it, aged thirteen, he enrolled at the University of Basel, at the Philosophical Faculty. At that time the University was rather small – nearly a hundred of students were taught by 19 professors. However, there was Johann Bernoulli among the teaching staff – a prominent star on the horizon of the world's science. Leonhard had a good memory and an acquisitive mind. He mastered the academic course quickly and easily, and in 1722 received his ‘prima laurea,’ roughly equivalent to a bachelor's degree. In his free time he attended lectures on mathematics, which were read by Johann Bernoulli. Bernoulli quickly discovered his new pupil's incredible talent for mathematics and started working with Euler - every Saturday he spent time with the professor's family and it had continued for several years. Leonhard made friends with Bernoulli's sons – Daniel and Nicolaus, who studied physics and mathematics in-depth. The friendship with Bernoulli brothers predetermined further trajectory of Euler's life.

In 1725 Bernoulli brothers were invited to work at the Imperial Russian Academy of Sciences in Saint Petersburg, recently established by Catherine I, Empress of Russia, and upon the project of Peter the Great.

The first meeting of the Academy took place in August 1725, six months after the death of Peter the Great. It is because of Bernoulli brothers' favour, in 1726 Leonhard Euler also received an invitation to the Academy at Saint Petersburg.

On the 5th of April, 1727 Euler left Switzerland forever, and in May, the same year, came to St. Petersburg. In the Academy Euler found comfortable facilities for the development of creative capacity: material security, opportunity to do his favorite job, ability to regularly publish his articles in a yearly journal. Euler started his position as an adjunct of the Academy. In August 1727 the young scientist had already gave his first talk. In 1731 he became a professor of physics, and in 1733 was offered an important post in the mathematics department, which had earlier been occupied by Bernoulli before he came back to Switzerland. The increase of Euler’s authority is well depicted in letters from his mentor Bernoulli, who in 1728 wrote that Leonhard is a ‘gifted young man,’ in 1737 – ‘famous and ingenious mathematician,’ in 1745 – ‘incomparable Leonhard Euler – the greatest mathematician". Besides, Bernoulli adds: ‘I have devoted myself to the childhood of Higher Mathematics. You, my friend, will continue its evolvement in maturity’, - really visionary words of the gifted teacher addressed to his outstanding student.

In 1735 the Academy received a task to do promptly very complicated and cumbersome astronomical calculations. A group of academicians needed three months to execute this work, as it required much time and energy. Euler took matters into his own hands and did the calculations in three days, but the flow of information exhausted Leonhard to the bitter end – the scientist almost died of high fever and strong infection and, thus, it cost him his right eye.

In 1740 the political situation in Russia worsened. At this time, Frederick the Great of Prussia decided to resume the work of the Society of Sciences of the Elector of Brandenburg, which was established by Gottfried Wilhelm Leibniz as far back as 1700. The gifted scientist was invited to Berlin through the Ambassador of King Frederick II. Euler accepted the invitation and moved to Berlin in 1744, where had been living for next twenty-five years. In the same year, the Society of Sciences was reorganized into the Berlin-Brandenburg Academy of Sciences and Humanities. The Academy was inaugurated on the birthday of Frederick the Great, on the 24th of January, 1744. Euler occupied the position of the director of the Mathematics Class and board member, and, after the death of its president, Pierre-Louis Moreau de Maupertuis, in 1759, he, in fact, became the leader of Berlin-Brandenburg Academy and managed the institution by himself. During this period he originated lots of ideas and his productivity on many areas of study increased. Leonhard published his articles in Berlin as well as in St. Petersburg – even both academies together could not handle the overflow of his works. In 1766 Euler received the cordial invitation from Empress Catherine II (the Great) through prince Dolgorukiy, who was the ambassador in Berlin at that time, to return to the Academy in St. Petersburg on any terms. Catherine II offered Euler to rule the Mathematics Class, to receive the status of Conference Secretary of the Academy and payment of 1800 roubles per year, the rank of academician and 600 roubles for his eldest son, Johann Albrecht. ‘And if you would not like it, - wrote the Empress in her letter to the scientist, - you can impose your own conditions, if only you would not hesitate to come to St. Petersburg.’ Even though there were numerous tries to persuade him to stay in Berlin, Euler accepted the invitation and returned to St. Petersburg in 1766. Catherine the Great greeted him as the member of the Royal Family, gave a fully accommodated house and one of her personal cooks.

From Euler’s numerous treatises, 29 are on pure mathematics, 31 – on mechanics and astronomy, 12 – on physics and other areas of study. Leonhard Euler made important contributions to calculus and wrote eighteen volumes on it, four and a half volumes on number theory, four volumes on geometry, one and a half volumes on algebra and one volume on combinatorics and probability theory.

Works on mechanics, planet and comet movement, theory of magnetism and ballistics earned him worldwide fame. But still his major works are tractates on mathematical analysis, written in 1748, 1755 and 1768-1770, in which the scientist summarized all his researches, done in recent time (‘Introduction to the analysis of the infinites’, ‘Differential calculus’, ’Integral calculus’). Back in the day Euler's trilogy was the most valuable publication in mathematics, being one of a kind.

Modern scholars admit that these tractates cover almost all necessary educational material which is nowadays taught in the course of higher mathematics.

Euler’s name is by far the most frequently mentioned name in textbooks. Not surprisingly, almost all branches of mathematics and its applications contain notions named after him: Euler's theorems, Euler's identities, Euler angles, Euler's line, Euler's circle, Euler's constant, the Euler function, the Euler integral, Euler's formula, Euler's equations and substitutions. Today’s high school course of maths includes topics in trigonometry and logarithms, based on his scientific discoveries.

This outstanding scientist is also known as a design engineer: he created not only the turbine equation, but introduced his own design of a turbine. His works on optics spurred Euler’s imagination on the possibility of building an achromatic refractor, denied by Newton. The first achromatic refracting lens was invented by an English optician John Dollond in 1758 under the influence of Euler’s works. Leonhard Euler was an expert in performance testing of a wooden one-arch bridge over the Neva River. The project of building a bridge was presented by a famous Russian inventor Ivan Kulibin and was praised by the scientist. Besides, Euler was the only academician to help Kulibin with calculations and treat him favourably.

Much of what is known of Euler's philosophical beliefs can be deduced from his ‘Letters to a German Princess’ (there are 234 letters). In 1768-1772 ‘The Letters’ were published in three volumes firstly in Russian, than in French and German, reprinted more than 111 times in eight European languages. They included lectures on mechanics, physical optics, astronomy and acoustics, and soon became very popular, making their author even more famous as a serious writer.

During all his life Euler took active part in important academic and philosophical debates on the logarithmic nature, the concept of a function (he was one of the first scientists to define it), the theory of monads and the principle of least action. Leonhard Euler, being a son of a pastor, once said ‘The less we involve God and the divine power in the worldly things, including science, the better it is for science and for the authority of God.’

Undoubtedly he remained the greatest mathematician till the end of his life.

At about midday on the 18th of September, 1783 after a lunch with his family, Euler was discussing the newly discovered planet Uranus and its orbit with a fellow academician Andrei Leksel. Leonhard died a few hours later, peacefully smoking his pipe and playing with grandson. Suddenly Leonhard felt badly and fell off his chair.

The most prolific mathematician of all time collapsed from a brain hemorrhage at the age of 77.  Euler was buried at the Smolensk Cemetery in St. Petersburg. In 1837, a headstone made of grey granite was placed on his grave. The headstone and the inscription written on it – ‘Leonardo Euler - Academia Petropolitana’ – came down to us. In the autumn of 1956, the headstone, together with Euler’s remains, was moved to the necropolis at the former Alexander Nevsky Monastery in Leningrad, placed near the grave of Mikhail Lomonosov.

‘Read Euler - he is the master of us all (Pierre-Simon Laplace).’ Euler is as genius in mathematics as Mozart in music, Pushkin in poetry and Michelangelo in pictorial art’ (Kovantsov).

Prepared by M.V. Shmyhevskyy, Assistant Professor of the Differential Equation Department of the Physico-Mathematical Faculty