NTUU "KPI" in development: results, problems and tasks. From the Rector’s report about future development considering the results of work in 2015 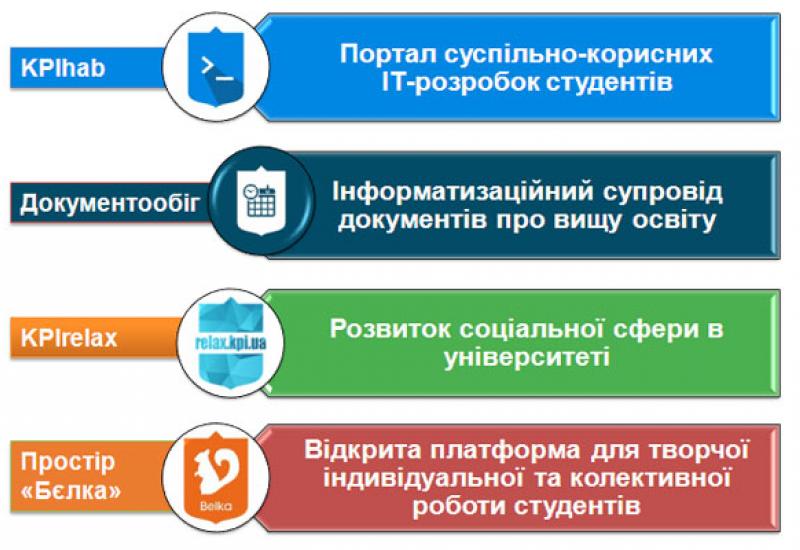 The department of perspective development coordinates the implementation of "Development Strategy "KPI "for 2012-2020 years" and solves the problem of development and management in the following areas:

In 2015 the department controls the formation and organization of  educational process of the military training department and tasks connected with support of projects "Open space for joint student scientific work" Belka "and a number of student informatization projects " KPIhab. "

I will describe the main results of the department in 2015 for directions.

1. Coordination of activities aimed at practical implementation of the "Strategy of " KPI "Development for 2012-2020 years."

In 2015 the implementation of the development strategy was considered positive by the decision of conference of KPI work collective. It demonstrates the high level of  the  university management organisation.

The Computer Park of  university consist of  5500 units of equipment integrated into the network, 30 backbone servers of  NTO "KPI-Telecom", 100 department servers, 3,000 users’ work places; more than 10,000 computers are integrated into the campus network.

During 2015 the department performed the following work:

In addition, during the year the department performed a number of works on informatization of the University together  with CB Information Systems (CIS):

3. The development of the property complex, optimizing of space university usage and its rent.

The Department of Military Training in "KPI" was created in summer 2015. It was placed in the educational building № 27. The redeployment of  ISZZI from a military camp at the Cave to the academic building № 27 was made. Thus, on September 1, 2015  educational building number 27 was fully returned to the university orbit. Some areas of the university are rented. Now university leases 4.32 thousand. M2, for which it received 4.8 million USD in 2015. Squares are mainly rented to provide social and personal services.

5. Organization of the program "Future of Ukraine".

The aim of the program is to identify talented and gifted students, their support and early vocational guidance, involving scientists "KPI" and National Academy of Sciences, the development of intellectual potential of society by attracting young people to research in science, engineering, economics and management, strengthening the integration of educational institutions of all levels to ensure quality education.

In 2015 the Department of perspective development was co-organizer of  the IV Festival of innovation "Sikorsky Challenge" in collaboration with the Scientific Park "Kyiv Polytechnic",  Startup School, other departments and structural units of the university. The festival held three innovative competitions: Ukrainian contest of startup projects "Sikorsky Challenge"; Ukrainian contest of scientific and technical creativity of pupils' Intel-Techno Ukraine ", competition of business presentations CRDF GLOBAL program "STEP 2015".

Almost 500 pupils, students and researchers took part in the competitions of the festival. 191 startup projects were considered on the competition "Sikorsky Challenge" 55 of which reached the final. 34 projects were winners, their authors have signed memorandums with potential investors totaling more than 573 million USD (over 26 million). 184 works in six categories were presented In the final competition "Intel-Techno Ukraine". The best projects will represent Ukraine at the world finals "Intel ISEF" in the USA. 26 projects took part in the final contest CRDF GLOBAL program "STEP 2015". 5 winners received grants for business trips to the USA in 2016. The Department participated in the organization of such competitions: Ukrainian Youth Water Prize - based on the HTF, "Intel-Techno Ukraine" - at the PTI, European engineering competition (April-December) - together with a student organization BEST; the defence  of research works by pupils of 8-11 forms in the branches of mathematics, chemistry, biology, engineering sciences at the Second (city) stage of the competition MAN. 140 employees from 11 departments (institutions) of "KPI" and the State Polytechnic Museum were involved in research work with students of 8-11 forms.

Open days were traditionally held on the faculties. The most ambitious University Open Day was held on December 20, 2015. It gathered over 1,000 participants from 180 educational institutions in Kyiv, 17 settlements of the Kiev region as well as from 26 settlements of  9  ukrainian regions.

6. Organization of cooperation and coordination of public student organizations.

The Department promotes the movement of grassroots student initiatives, supporting a number of projects: the project "Open space for joint student scientific work" Belka ", which will soon begin its work in the 4th hall STL; student initiatives on informational support: "KPI schedule "," KPI Maps, "" KPI bot "," KPI hub "; reconstruction of student cafe in the 4th campus building and others.

7. The work organization and integration of ISZZI and the Department of Military Training NTUU "KPI".

Labor protection Department together with management of sociology and law faculty set up the psychological counseling room, where t teachers of psychology department assist employees and students of the university.

In 2015 we managed to achieve significant improvement in quality of health care for the staff and students. During the season, more than 2.5 thousand employees and students KPI improved their health at our recreation bases. Overall revenues totaled 5 million 879 thousand USD, which is 53% more than the previous year. At the same time, the price of recreation was one of the lowest among universities in Ukraine. For the first time in many years, recreation bases ceased to be a loss, and also brought additional funds to be used only for the development of these facilities. The total share of funds for the development of health units amounted to 827 thousand UAH.

Recreation bases "Polytechnic" and "Sosnovyy" work was organized to provide an opportunity for students and employees to have rest not only with permits, but at any free time.

A system for monitoring and financial reporting of recreation bases was introduced, allowing to keep under control their activity and prevent corruption.

During a health campaign electronic registration was conducted for the students, which helped organize fast sale of vouchers without queues.

Powerful advertising on the Internet allowed us to invite outsiders, which provided additional income for health units.

During 2015 we managed to improve catering service sphere.

A major reconstruction of the main dining room TSSH for ISZZI students was made that allowed to organize the daily three-meal alimentation for more than 500 cadets. Automatic funds accounting system was introduced for  TSSH "1C: Accounting" and also cash registers were installed in all University cafeterias and snack bars. This allowed to improve productive discipline, broaden the product range and improve its quality. In order to popularize TSSH such events as  " Student Day in TSSH," "Borshch Day " and others were held. TSSH finished fiscal 2015 with a positive balance of 470 thousand UAH and food residue on the food warehouse of almost 935 thousand UAH.

In 2015, the Department together with specialists from the Centre of Physical Education and Sports opened modern sports clubs "AcroLine", "SlackLine" and "AcroSlackLine", which now successfully work at the Centre and have gained popularity among young people; a project of upgrading the existing climbing wall and transforming it into moderm gymnasium was developed. Estimates of the Center of Physical Education and Sports was carried out at 127%, which will increase the services quality and develop the recourse and technical base.

In order to provide services and fast informing of the staff and students the website http://relax.kpi.ua was created, which was attended by more than 45,000 visitors in 2015. The website contains all the information about units and gives the opportunity to feedback. The website has become popular not only among the university community, but also among the Kiev residents, who attended  health units of "KPI" throughout the year.

In 2015 the work of student sanatorium-dispensary was suspended, due to the termination of its financing by the Social Security Fund. Last autumn, the Verkhovna Rada of Ukraine passed a bill to partially restore funding for health centers, concerning the salaries, but the issue is not completely resolved yet. The resource base of sanatorium-dispensary is pending restoration work.In conclusion, I would like to emphasize that the main task of our department is working  for the future. We should focus on implementing development projects  NTUU "KPI" and the search for new ideas that will bring our university to international standards. We are waiting for cooperation with all departments and direct involvement of  institutes and faculties. I would like to thank the staff of the Future Development Department for fruitful work. Despite certain difficulties, the university is steadily moving into the future, and together we are able to achieve the objectives established in "Development Strategy of NTUU " KPI "for 2012-2020 years.