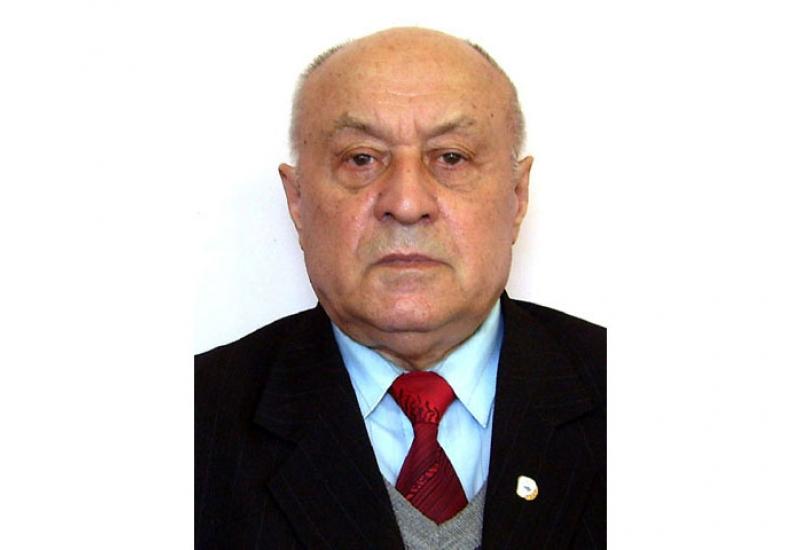 On the 5th of October, 2012 director of department of physical and chemical metal technology of Kiev National Technical University “Kiev Polytechnic University”, correspondent – member of National Academy of Sciences of Ukraine, veteran of higher school in Ukraine, high achiever of education in Ukraine, professor Dmytro Fedorovych Chernega is celebrating his 85th birthday.
He was born in rural family in village Mykolajivka, Borznyanskij district, Chernigiv region. In 1944 he worked at steam-engine-repair factory in Konotop, then entered Konotop railway technical secondary school, which he successfully graduated from in 1948. The same year he entered the first course of metallurgicaal faculty in KPI. Since that time his life have been tightly coupled with Kiev Polytechnic University for 64 years!

After graduating from KPI in 1953, D. F. Chernega worked as assistant, master teacher, associate professor, professor. In 1959 he defended Ph. D. thesis, in 1974 – D.Phil. In 2000 he was selected as correspondent – member of National Academy of Science of Ukraine.

In 1959-1964, D.F. Chernega – pre-dean of metallurgical faculty in appointment, in 1965-1972 – dean of mechanical-engineering faculty, in 1975-1988 – dean of physical-engineering faculty (he proposed the new name of the faculty). He initiate in 1977 the department of physicochemical metal technology foundation, where he is indispensable administrator and where the first in the world bachelors, specialists, MPhils on ‘Special metallurgy’ speciality preparation began. He was entrusted by the director of KPI G.I. Denysenko to project and built study building №9, which was putted in commission in 1988.

D. F. Chernega – is well-known scientist – metallurgist, one of the leading scientist in steel metallurgy direction, special electric metallurgy, electrocinder technology, nonferrous materials and materials metallurgy, physical-chemical processes and metallurgical processing researchers. He is the founder of science school, whose representatives successfully works in industry, NTUU “KPI”,NAS of Ukraine and other educational and scientific establishments in Ukraine and abroad.

Scientific interests of D.F. Chernega includes important questions of metallurgy: learning the properties of liquid alloys; gases behavior inside iron and nonferrous materials alloys; azotization of aluminium alloys, electrophysical machining alloys for hydrogen increasing and ingot and outgot quality enhancement; alloys modification and microalloying, high-quality alloys acquisition. A lot of works are devoted to actual problem as resource-saving and low-waste industry development. Under his leadership, fundamental researchers on mass transfer of gasses in binary and multicomponent metallurgical systems, which are unique in word of science. Defined process regularity hydrogen transfer in liquid alloys, allowed to develop and get the machinery hydrogen for express-control in liquid alloys, directly in melting furnace and distributive plants.

D.F. Chernega have been working productively for 10 years with NAS of Ukraine in material science field, supporting tight contact with scientists from China, France, Czech Republic, Slovakia, Poland, speak with lectures at domestic and international science conferences. For many years he was the head of “Kolorovi Metaly”, under scientific council AH CPCP, for 10 years expected directors duties of metalogy and metallurgy in council of MOH youth and sport in Ukraine. He is the head of specialized senate of Candidate thesis protection, member of presidium of metallurgy science Association in Ukraine, member of editorial board of 3 journals in Ukraine, organizer of different international science conferences and seminars. D.F. Fedorovych – is the participant of the Great Civil War, awarded with a great number of medals.

D.F.Chernega is the author and co-author more than 680 of published works, including 5 monograms, 1 workbook, 6 textbooks, 7 brochures, 40 certificates of recognition,1 textbook is translated into Chinese and Polish. Under his management 31 MPhils, 20 Ph.Ds and 10 DPhil were defended.

D.F. Chernega for 9 times was the laureate in contests in NTUU “KPI” (academic-researcher-2, for textbooks -2, workbook -1, best diploma and magister works of students -4).

Awards: Highest award of USSR “Honor Diploma” (1974); Honorary degree “Honoured worker of high school of Ukraine USSR”(1983); Honored diploma of Ministry of education and science of Ukraine”(1987); Honored diploma of presidium of Verkhovna Rada of Ukraine USSR (1989); ”Honored professor of NTUU “KPI” (1998); Golden honored sign NOT – Federation of science-technical associations in Poland (2001); Honored diploma of Cabinet of Ministers of Ukraine(2002); order “For merit in science of metal” (2006), Honored diplomas Chernigiv region government administration “For good work in the name of independence Ukraine” in 2007 and 2009, order “For merits” 3d degree (2008), order “For merits” 2d degree (2012).
Professor D.F. Chernega exploit deserved authority among colleague, respect among scientists, lectures, co-workers and students of the university, work hard, has the resource of creative strengths for researching and solving educational and scientific questions.