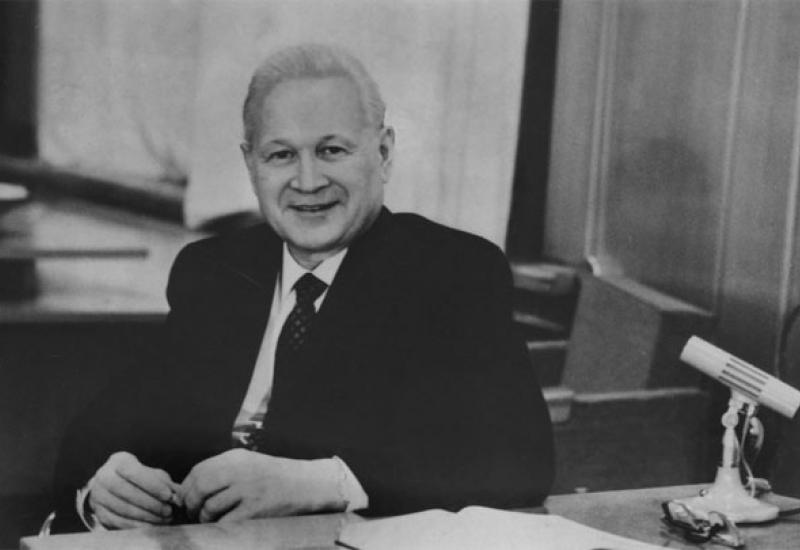 Volodymir Mykolaiovich Chelomey was born in June 30, 1914 in Sidlets town of Pryvislyanski district (modern Poland) in the family of teachers. Soon the First World War burst out and Chelomey family moved to Poland.
Then in Kiev Volodymir finished 7-year school and in 1929 entered to the automobile technical school. Further education was at the aviation department of Kiev Polytechnical Institute (1932) and in Kiev Aviation Institute (KAI), which used to be a department until 1933. But it was not enough for him. He attended lectures of eminent mathematicians and engineers, including academicians of the All-Ukrainian Academy of Sciences D. Grave and M.F. Kravchuk at the university and in the Academy of Science.

Successful studying gave its results. Doing his homework on thermal calculation of aircraft engine a sophomore 19-year old V.M. Chelomey used his own method of calculation by using vector calculus. The work was published in “Trudy KAI”. During his studying V.M. Chelomey published 20 scientific articles in this edition. His knowledge, especially in vibration theory he used in practice. Twice during the practice on engine plant (modern “Motor-Sich”) he twice determinate the causes of engine breakdowns and gave recommendations due to their elimination. By request of the plant designers he read them lectures on theory of vibrations. There he conducted his first experiments on the pulsejet engine construction, the theory which he started to develop.

During the war V.M. Chelomey continued his work at the pulsejet engine construction and later he worked with glide-bomb which worked on this engine. In 1944 at the suggestion of People`s Commissar of Aircraft Industry of the USSR O.I. Shahurin was appointed as the chief designer of the plant №51 which produced this weapon. In the end of 1944 glide-bombs were tested and prepared for output. Fortunately, they were not used. After the war V.M. Chelomey engineered some more alternatives of the weapon and looked for some ways to improve its fidelity. But he was outrun by A.I. Mikoyan and S.L. Beriya who decided to create the glide-bomb at the MIG base. In 1953 they were rendered the plant and V.M. Chelomey designing department.

Nevertheless, V.M. Chelomey was able to catch the interest of the leaders of the naval forces about his ideas. In 1954 the work of separate design team of Chelomey was renewed and in 1955 there was created the Experimental Design Bureau №52 and Volodymir Mykolaiovich worked as the chief designer. There were created cruising missiles for the naval forces and their wings for the first time opened in flight. The Chelomey cruising missiles could engage targets at sea and on shore as well as from seaward and from shore.

In 1959 V.M. Chelomey became a chief designer and was entitled as Hero of Socialist Labour. In 1960 his designing department started the production of satellites and ocean-spanning strategic missiles. At the end of 1963 the Chelomey satellite “Poliot-1” was launched and it was the first one that could change its orbit, i.e. it was maneuverable. Produced by Chelomey the guided missiles warheads (GM-100) could be on alert up to 10 years being preserved in container pod and ready for launching. It was the new word in missilery. Renovated missiles GM-100 are still on combat alert in Russia. The missile GM-500 also known as “Proton” was converted into much powerful ones such as “Proton-K” and “Proton-M”. They could place into orbit 22-tonne satellites and into interplanetary ways stations above 5-tonne.

V.M. Chelomey planned to use “Proton” missile as the second stage of moon missile. And he also planned to produce the first new stage from engine bodies and from systems of this and others cruising missiles. This helped to gear up the work and to create a robust new missile of minimum costs. But the preference was given to S.P. Koroliov`s project of the missile N-1 which involved the production of all new stages with their designs, engines and systems. After four fail launches the project N-1 was closed. But with the help of Chelomey`s “Proton” the finished “Soyuz” was launched for the circumnavigation of the Moon. Unfortunately, this project also was successful in unmanned variant only in 1969 and 1970.

A bit better was the fame of the orbital manned station “Almaz” which was produced by Chelomey on demand of the Ministry of Defence of the USSR. To reduce the influence of fails with N-1 and “Soyuz” the group of the Central Mechanical Engineering Design Bureau workers (the S.P. Koroliov`s Experimental Design Bureau №1 in the past) wanted to outrun V.M. Chelomey and to set an extended duration space station of commercial value by using already produced bodies of the OPS “Almaz”. With the help of the CPSU Central Committee they were turned back. In April 19, 1971 the “Salut” station was placed into orbit and Chelomey`s “Almaz” was launched only in April 3, 1973. But it was named the “Salut-2”. In April 15 the depressurization of the station was evident and in April 16 the connection with it was broken. In May 28, 1973 the station sank in the Pacific Ocean. There were two manned “Almaz”, they were “Salut-3” and “Salut-5”. Spacemen who worked at the stations got a lot of new practical information as well as scientific. And “Almaz” stations appeared again as unmanned automatic stations.

V.M. Chelomey created them in 1976 and 1977 through the thorns on the way to manned space exploration. The new “Almaz” with modern radar had been waiting for its launching from cosmodrome for about 6 years. It was preserved against the orders about its export from the integration and test building that could lead to destruction of this apparatus. Only after 3 years the death of V.M. Chelomey and D.F. Ustinov in July 25, 1987 it was successfully placed into orbit and the received images from radar were of a high quality. In the American newspaper “Washington Times” was mentioned that this satellite could appear in America after 8 years.

Thus, V.M. Chelomey outran Americans for well 15 years. Another unmanned “Almaz” sation was launched in 1991. It was the last one of these stations ever used. Nevertheless, many constructive solutions namely the ideology of SEO and the technology of large space structures creation for the first time produced for “Almaz” station were used in the past and are used now. They are “Mir” station and the modern ISS. By the way, it takes the basis of the functional cargo block transport ship support (FGB TSS) created for SEO “Almaz”. Therefore, the creation of the International Space Station became possible due to the usage of the space launch vehicle “Proton” and constructions and technologies worked out by creation of this missile and the “Almaz” complex.

In the 60th V.M. Chelomey started the production of the light space plane (LSP) which could be launched into space by the “Proton” missile. The good results in the full-scale specimen probation slap to engineering development. But, in 1965 all the materials and performers went to A.I. Mikoyan; on this base the “Spiral” project was developed. But in 1975 V.M. Chelomey turned to the LSP again. He thought that with the help of the space launch vehicle “Proton” up to 5 tonnes of net load he could place into orbit the LSP with initial mass of 25 tonnes. Since the loads of bigger mass were not provided it had to be more advantageous than the heavy aircraft like American Shuttle which demanded the creation of new vehicle, but this work was also tied up by the State Committee for the good of V.P. Glushko`s project. The results of this are widely known. The “Energiya” was launched twice and the “Buran” only once. There are no orders, loads and costs for their new flights. But the projects similar to the LSP are developed in several countries, including Russia.

It should be mentioned, that not all of the V.M. Chelomey`s ideas were brought to life. So, there is a great work for the next generations of designers.

But V.M. Chelomey`s activity was not a design only. His scientific contribution is also significant. There are many of Ph.Ds., but the number of academicians is smaller. And, furthermore, the number of the founders of scientific schools is far less. Being a student and studying vibrations he achieved great success. His contribution into the vibration theory in elastic systems is still of practical importance. The scientific schools of nonlinear mechanics and missile and space flight vehicles dynamics helped to educate new scientists, many of them became his close associates. In 1958 he was chosen as a corresponding member and in 1968 as an academician of the Academy of Science of the USSR with a degree in mechanics. His scientific achievements are rewarded with the golden medal “For the best work in the theory of aviation” n.a. M.S. Lukovski of the Academy of Science of the USSR (1964) and with the golden medal “For transcendent merit in mathematics and mechanics” n.a. O.M. Liapunov of the Academy of Science of the USSR. In 1974 he became a full member of the International Academy of Astronautics.

The professor of the Moscow Higher Technical School V.M. Chelomey was also a prominent teacher. Students never missed his brilliant lectures and they always were pleased with his clear explanation. In 1960 V.M. Chelomey founded at the Moscow Higher Technical School the department of machine dynamics, which he monitored till the end of his life. He managed to create a group of eminent scientists who together with the graduates of the department made a great contribution into the modern rocket-and-space equipment development. He was the first who united course and graduation designs with certain production tasks. His students realized that their designed products would become a real constructions, so they thoroughly studied not only the practical quality of the products but also their manufacturing technology. Such students became great designers. The opportunity to be consulted by prominent specialists and scientists in any question was also conducive to incipience of academics.

All Chelomey`s activity was oriented at the future. Among his heritage are not only his machines but also a great scientific potential gathered on the way from his birth to the ultimate engineering implementation of each direction of his activity. The academician V.M. Chelomey had a talent in scientific guess. His scientific ideas, unique technical decisions and practical studies will long serve the world science and technic.

A.G. Dormidontov, the veteran of Baikonur cosmodrome and the honoured examiner of Baikonur
The material was taken from the “Kyivski Politehnik” newspaper