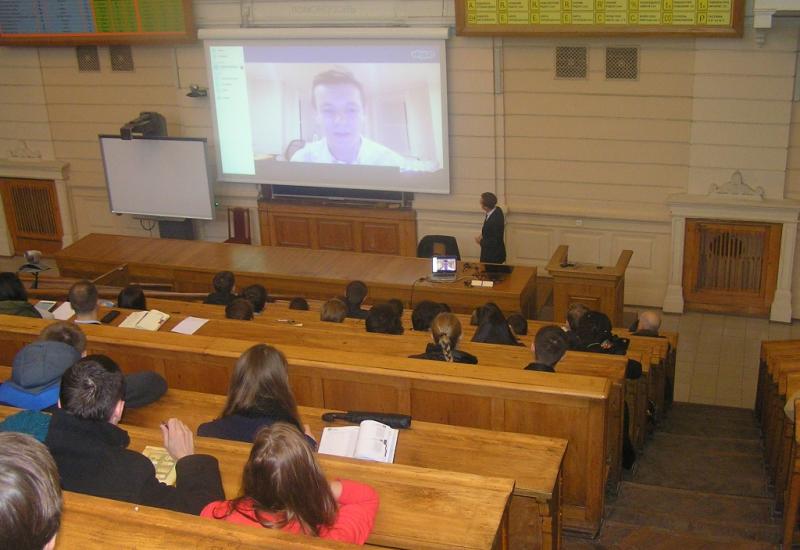 On October, 23rd there was a skype-conference with the Faculty of Applied Mathematics graduate, CEO of PetCube start-up, Yaroslav Azhniuk in the Physics lecture hall of the building #1 on NTUU ‘KPI’.

Yaroslav started doing business since the 3rd course by creating his own Internet-marketing agency. Later this business was sold to the biggest digital-agency in Ukraine, Prodigi, where Yaroslav Azhniuk was occupying the position of Marketing Department Director in Social Media. Dozens of conferences, trainings, seminars connected with Internet and its opportunities are in his portfolio. However, he became famous due to the PetCube project (more details at https://petcube.com/).

Yaroslav Azhniuk is not only an engineer and famous business but also extraordinary person. So, his story about personal experience of organizing business, education and obtaining new knowledge beyond the university was very interesting for listeners. That’s not strange: the majority of them were almost Yaroslav’s peers (who is only 27 today) from several faculties and institutes of KPI.

He also spoke about PetCube – ‘communicational device for people and animals’ –the definition provided for the device, about the idea of its creation and realization. However, he was also discussing other issues. Particularly, he was speaking about the necessity of knowing philosophy and obtaining fundamental studies that makes our mind think in abstractive categories. Extremely interesting was his point on importance of programming knowledge while creating and organizing the company’s work as well as his opinion on art and programming science as useful knowledge for representatives of any sphere of human activity and the demand increase on the in the nearest future. There was a discussion about promotion methods of new developments on the global market, about the PR role and search for investments, about the building of the team that can generate and fulfill new ideas; and, finally, the literature that has to be read and why the engineer and programmer have to not only think about specialized things, but also make art part of your life.

Then, there was question section. Questions were, of course, connected with business, obstacles on the way of its building and development, differences in business climate of the USA and Ukraine etc. There were the questions concerning the perspectives of Ukrainian start-up Kickstarter.com (according to Yaroslav, it’s not that difficult – you just have to use opportunities that the Internet provides and find an engaged person in the USA).

The meeting ended with Yaroslav’s words that the world is very changeable and the sooner we realize the opportunities that the changes bring us, the more interesting life we’ll have.