Girl in the colors of autumn 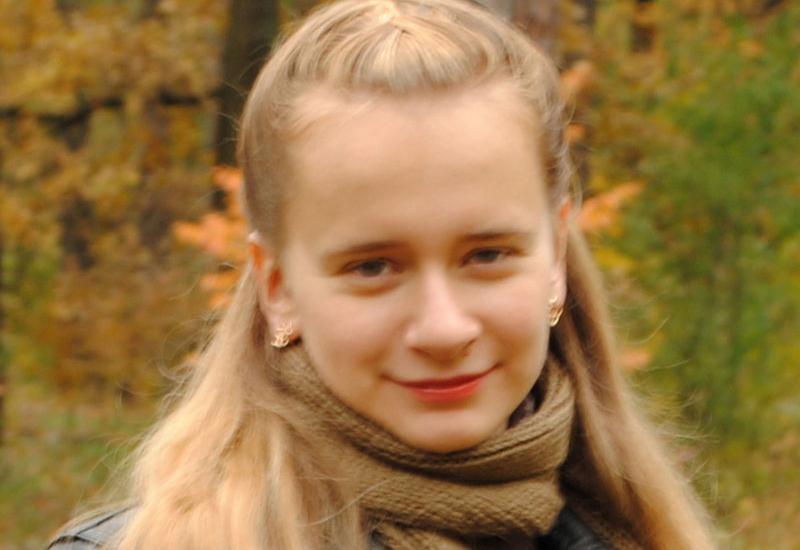 In the gorgeous palette of autumn everyone chooses colors which are preferable for us. So women faces: the soft- spring , luxurious, mysterious . Why mysterious ? This is not revealed immediately. Quick look cover image, attentive – details, inquisitive - character. Considering photos of 6 year student of FMF Alice Tsukanova can be long (sorry , readers will not see in colors). For watercolor appearance hides a lot of outstanding sides of personality. And give the word to our heroine - the future mathematician who among the best received a scholarship named after Mikhail Kravchuk - founder of the national mathematics.
" At the moment I 'm learning by specialty" Mathematics . " In school, I was fond of law, world history and literature , was medalist and winner of the competition for these courses after graduation planned to connect life with journalism or jurisprudence. But in high school to humanitarian hobbies was joined other subjects. At that moment I realized that physics and mathematics - it is not only long and boring formulas from library’s books , not just classes, when you want instead of that play truancy, not just the language of science , this is much more. Victories and prizes which took place in the district’s and city’s competitions in physics and math , funny hour " leisure" with textbooks such as Skanavi and Helfhata, unforgettable assembling of colloquia from sections of school physics - whatever there was in the days of school youth , the crown of which was the long-awaited release of the physical and Mathematics Lyceum of Kiev, high performance EIT and getting an unexpected gold medal.

Until the last moment, I was hesitated, what I want to be when I grow up : geek , psychologist or journalist - hence the choice of university was not easy : KPI, Kiev National University , NAU, NMU ... I chose KPI, because he is the best among Ukrainian universities and is a globally recognized institution . Why math ? Due to the fact that mathematics is something to learn : it is , as no one will teach anticipate , analyze and make clear conclusions. In addition, this beautiful art, beautiful outputs of search is not quite beautiful and good management trainer for the brain , what convinced from experience . " And then - with the same enthusiasm about the present.

"My five-year PMF - is terabytes of information from several dozen branches of mathematics, related sciences and humanities gigabytes of information with almost a dozen unforgettable sessions, enormous magic of ink manuscript, absence from hundreds of classes, a dozen publications on the conferences, successful performance on the faculty’s Olympiad on mathematics and English, an unexpected prize in this annual National Olympiad from occupational health, new friends , unforgettable moments, hundreds of accidents (eg , obtaining again scholarship on the name of M.Kravchuka at the second semester and it was quite unexpected - the same pleasant surprise ), valuable experience and a great school of life . "

And at the end she opened her another unexpected facet "Of course there are a lot of study, but also the frantic moments of leisure of crazy youth has not been cancelled , so I don’t forget about music, swimming ( in childhood I was professionally engaged in swimming and wanted to become a great swimmer or if it wouldn’t happen to build a dolphinarium and work with dolphins ), photo and endless search for adventure . "

Adventure and mathematics under one roof ? Incredible mix. I’ve recalled another scholarship student, graduate IPF , who marked the competition of an independent study with the trip to India (previously had dozens of other adventures ). A lot of employers were struggling for her, and not mentioning guys. So we will wish Alice confidence , inspiration and a bright future.