Ginkgo biloba L. Contemporary of dinosaurs in the KPI 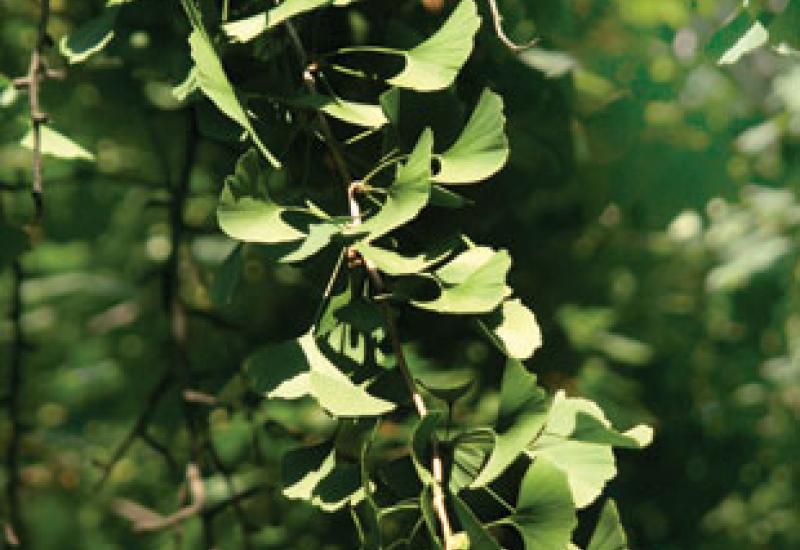 A strange tree, enclosed by a  short fence, is growing on the back side of the west wing of the main building. In autumn, it drops its strange, painted in golden yellow color leaves, which kids and adults like to collect. And there is something to wonder: fan-shaped leaves, with veining, a drawing similar to the ancient ferns, with one or more notches on the top  of the corrugated edge.

This plant - Ginkgo biloba L.- is the oldest kind of trees growing on Earth right now. In the Jurassic period, 200 million years ago, they grew up in Asia, Europe, North America and even in Greenland, and were the most widespread  in the Mesozoic, during the reign of the dinosaurs, pterosaurs and ichthyosaurs. Therefore, it is called a "living fossil plant".

The name "Ginkgo" is derived from the Chinese plant names gin-kyo, which means "silver fruit." Ancient Chinese monks planted a tree on the "holy places" in monasteries. They believed that the plant with fan-shaped leaves of the original two-blade symbolizes the two categories of Chinese philosophy - the yin and yang is a symbol of wisdom and concentration, stability and longevity. Until now, in China, Japan, Korea, ginkgo is called "the tree of youth."

Ginkgo biloba is the predecessor of conifers. But unlike  its young relatives-contemporaries there is no needles in  ginkgo. Its leaves - needles, fused, in the autumn they turn yellow and fall off. And the fruit of the ginkgo do not look like cones: in form they are more like an apricot. Ginkgo is now the only living representative of the "transition stage" between ferns and conifers.

Its seeds are covered with a fleshy cover (like a plum). The seed  has  a sweet taste - a cross between a baked potato and chestnut. The fruit pulp and rotting fallen leaves of female specimens have an unpleasant odor, so females are not used for cultural spaces. But in Korea, Japan and China, on the contrary female trees are considered the best because they provide edible fruits.

In Ginkgo male and female reproductive organs are formed at different trees. This is the only tree in the world, which is fertilized in the fall of fruit, and not by wind and insects, other plants. Departing from Kiev in 1943, the invaders brought with them from the  botanical garden  a very valuable sample of female ginkgo biloba. This fact for decades has slowed reproduction these relict trees in Kyiv. Ginkgo may bloom in spring or autumn. In some years, it does not grow at all, while in others the annual increase may be up to 1 m in height. In good conditions, the first 30 years of ginkgo increases from May to August, adding to the growth of an average of 30 cm per year. The tree begins to bear fruit at the age of 25-30 years. Before this age it is impossible to visually determine the sex of the instance. To by fertilizede, male and female trees must grow together (sometimes even specially grafted branch of one tree trunk on the other).

The ginkgo trunk consists essentially of wood and is reminiscent of the structure of modern trunks conifers, but in contrast, has no resin ducts in the wood and does not form a resin. Ginkgo has a very simple vasculature: main vessel divides into two. This pattern is characteristic only for vessels of ginkgo. Ginkgo wood is very light and bright, smooth and easy to work with. It is used to create wooden sculptures and objects for the tea ceremony. A ​​paper is also could be made from the ginkgo wood. Ginkgo wood is resistant to fire.

Ginkgo trees are known for their unique ability to survive. They resist to a poisonous smog, acid rain, poor organic and mineral substances of the soil. They are not afraid of bacteria, viruses, fungal diseases and insects, so ginkgo can be successfully grown as an ornamental plant in the large industrial cities. For example, in Nagasaki,  there is a tree that is more than 1200 years old.

In China it was found in vivo a ginkgo tree with a height of 45 m and 9 m in diameter. It is believed that its age is approaching 2,000 years. With a grand fire in 1923 in Tokyo ginkgo tree survived when other trees have been destroyed by fire. A tree, which fell under the nuclear bombing of Hiroshima during World War II, has chared, but then gave the new shoots!

European scientists have found living tree gingko in 1690 (before they met only plants  prints on the rocks). "Living fossil" - Charles Darwin called it.

In 1754, the plant has been planted in England. There it is still preserved the tree, with a help of which  the characteristics of fertilization of ginkgo were discovered and studied.

In China, the ginkgo is a respected and favorite plant. Trees older than 100 years are entered in the special security lists. There is a tradition to plant ginkgo in occasion of  a childbirth, wedding, house warming, etc. .

Until the XI century. Ginkgo in China was known as the "duck feet", because its leaves are very similar to the foot of one of the most popular Chinese birds – a Mandarin duck. Later, the tree started  to be called "King Sun Shu" - "grandfather and grandson," because the first fruit of the tree, planted by his grandfather, his grandson will collect only. By various names the tree  is known in other countries.

In Japan, the tree is called "Ginkgo", "white fruit." In the Netherlands - "temple tree", "Japanese walnut tree." The British called Gingko "tree girl's hair." Its leaves resemble them one of the most delicate ferns, known as the "lady's hair." The French dubbed ginkgo "tree forty crowns." This name came in 1780 with the Paris botany amateur Petina. He managed to buy one of British gardeners pot with five small Ginkgo shoots for 25 guineas, ie ECU 40 for each. These trees became the progenitors of almost all gingko growing now in France.

In Germany it is called "ginkgo tree", "tree Goethe", "white fruit", "tree with golden fruit", "silver apricot", "Japanese walnut tree." The name "tree Goethe" owes its origin to a poem by the great German poet "Ginkgo biloba". It was written in 1815 (published in 1819 in the so-called "book Zuleika") and is dedicated to the beloved poet - Marianne von Willemer. In the poem the ginkgo leaf is a poetic way the author's submission that the two can form a coherent whole.

This leaflet was from the East
In my humble garden is brought,
And  for the seeing eye
Secret meaning is in it.
Are there live here
Split in half,
Or, conversely, just two
Appear in the same to us?
And riddle and doubts
Solve my verse one:
Re-read my creations,
I myself - dual united.

The first mention of the treatment effect of Ginkgo biloba leaves was found in ancient recipes of traditional Chinese medicine, written over 2,800 years BC.

The first publication for internal use of the Ginkgo tree leaves for medicinal purposes dates back to the year 1505 AD. A tea made from its  leaves, was recommended when coughing, choking, for the speedy recuperation in the recovery period. Modern Chinese Pharmacopoeia suggests using the leaves of Ginkgo for the treatment of diseases of the heart and lungs, etc.

Today medicines developed on its basis, are included in the arsenal of the most effective tools of modern medicine. According to the European Health Organization, the preparations of ginkgo doctors prescribe to their patients especially readily and frequently.

Ginkgo biloba normalizes cerebral and coronary circulation, restores degraded as a result of age-related changes in memory, hearing, sight, speech and motor functions, eliminates circulatory failure (including atherosclerotic origin and age), restores the elasticity and strength of blood vessels, preventing thrombosis of cerebral and coronary vessels, and normalizes the metabolism of the brain tissue, enhances the power of the heart muscle with reducing properties and helps to maintain the integrity and permeability of the cell walls to prevent asthma attacks, has a sedative and antispasmodic action. All the available scientific information on ginkgo indicates its ability to increase life expectancy.

Now ginkgo seeds called "silver almonds" or "white nuts" can be bought in stores in China and Japan.  They can be eaten when fried, baked or dried, are used as a seasoning for dishes of vegetables, rice and mushrooms. Ginkgo seeds contain only 3% of fat, high in protein, starch, and nicotinic acid. It is exported from China to other East European countries, where it is sold in specialty stores, department stores and "green farmacies".

The world's largest ginkgo plantation is  located in Southern California. Every year, more than 1.1 thousand ton of dried leaves are sent on ships to Europe. Small plantations of Ginkgo  are also in France. Leaves are recycled and an extract is made ​​in Germany, Sweden, Ireland and France.

Ginkgo is also used for the cultivation of the form "bonsai". There are two types of bonsai - with aerial roots and fruiting, both are very good.

The material was prepared by  N.Vdovenko