Cossacks wrote the letter ... ["Was there such a letter, really?"] 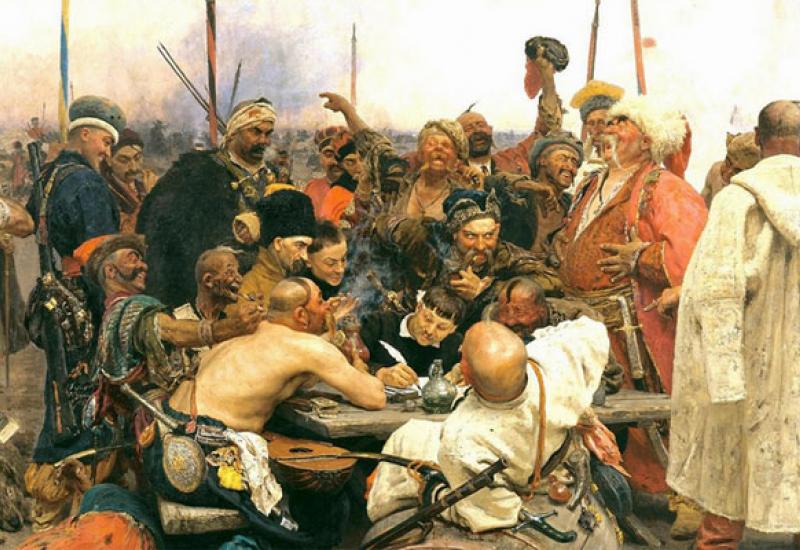 I, as a historian, has long wanted to express my opinion on the said topics, but all the time something prevented. I was prompted to write by the publication in our newspaper for December 14, 2006 "Painting with history." Let me remind you: at the exhibition "Talents KPI" it  was presented a large copy of a famous painting by Ilya Repin "The Cossacks are writing a letter to the Sultan." Author – Professor IME V.V.Hilchevsky.

Taking with me a small reproduction of this painting to a lecture from the course "History of Ukraine", I showed it to freshmen physics and mathematics faculty. There was no doubt about it: everybody knew who is the author and subject of  the painting. But to the question "was there such a letter, really?" there were no clear answers. This debate for me, as a teacher, was extremely interesting, because there are in the Institute some students from Turkey.

Cossacks letter was written ostensibly in response to the Turkish Sultan Mahmud IV proposal voluntarily surrender without resistance. Let me cite you a letter of the Turkish sultan.

"I, Sultan, son of Mohammed, the brother of the sun and moon, and the grandson of the governor of God, ruler of all the kingdoms of Macedon, Babylon and Jerusalem, large and small Egypt, the king of kings, lord of all existing, extraordinary knight, invincible; relentless guardian the tomb of Jesus Christ trustee of God; the hope and comfort of Muslims, a great defender of Christians, command you, Zaporozhye Cossacks, to surrender me voluntarily and without any resistance and do not disturb me with your attacks.

The fact of writing this letter raises the doubts. Researchers, historians, who were involved in this issue, believe that such a letter does not exist, however Zaporozhye Cossacks wanted such a letter, and they could give an adequate response to Turkish Sultan.

That is why no wonder that in different regions of Tsarist Russia "there was" its own version of the letter-response to the Turkish Sultan and most of them existed in Ekaterinoslav (Dnepropetrovsk) province, which is not surprising, because among eight  Zaporizhzhya Sichs 5 were held there.

Almost all the authors, one way or another mentioned "Correspondence", attributed its origin to the activities of Zaporozhye ataman Ivan Sirko. First this idea was expressed by prof. D.Yavornitsky - researcher of the history of Zaporizhzhya Cossacks. In the book of Ivan Sirko he made this suggestion on the condition and circumstances of the "Correspondence". After several successful campaigns in Left-Bank Ukraine Sultan Mohammed IV began to hatch plans for the conquest of dangerous forces that opposed him - Cossacks and Zaporizhzhya Sich. As the Cossacks were not given to any persuasions, the sultan decided with the surprise attack to destroy the Sich and do away with the Cossacks. In the autumn of 1674 from Constantinople to the Crimea there were sent  15 thousands of the most trained Janissaries. They, along with the Crimean horde  had secretly implement a plan of the Sultan. Once rivers were frozen, 15 thousands Janissaries and 40 thousands Crimearn hordes led by Khan went to the Ukraine. The campaign was unsuccessful. 13,500 Turks were killed, 1500 were running, 150 were captured. After this fight Ivan Sirko called a meeting of the Cossacks, who decided: the Khan "as a thief climbed nightly at the Sich" and wanted to destroy it, he deserved the revenge. In the summer of 1675 20 thousands Cossacks led by Ivan Sirko went to the Crimea, smashed some military units Khan, released many prisoners, captured some Tatars and Turks, successfully returned to the camp. Hence Koschevoi Sirko allegedly wrote Khan half-humiliating letter: "The respectable Crimean Khan with many troops our neighbor! ... You came to us, the army of Zaporozhye, with the Sultan's janissaries and many Crimean hordes.  And because your deed upset us and gave us the disappointment, then reconcile ancient ancestors and our brethren, we decided to try take revenge on your Khan mercy and all the Khanate, but not secretly, but openly, chivalrously. "

Especially popular the "Correspondence" became after the famous painting by Ilya Repin "The Cossacks". In the summer of 1878 Repin being with friends on the estate Abramtsevo near Moscow,  for the first time acquainted with the text of the letter of the Cossacks to the Turkish Sultan. The letter produced on him a large impression. There was in it a freedom-loving spirit of Zaporozhye, which attracted the attention of the artist.

July 26, 1878 under the influence of the "Correspondence" Repin made a pencil sketch of the first picture. Since then, this theme has taken his creative plans and occupied the central place. As an artist, he has penetrated deep into the essence of the historical events of the XVII century. Ukraine and the letter of the Cossacks. The painting was completed in 1891.

In the visual arts Repin first reflected the glorious sons of great Zaporozhye freemen. Victorious in all ataman Zaporozhian Host Ivan Sirko with a demonic look in his eyes, with a pipe in his mouth and a hat covered with black cloth - an unrivaled hero, a sworn enemy of Muslims.

In my opinion, the most appropriated pattern is presented in a letter recorded in the XIX century in Chernihiv and published in the journal "Russian Antiquity" in 1872, №12: "You, Turkish Satan, the accursed devil brother and Lucifer himself secretary, but not the Ataman!

What the hell a knight are you? Damn ... ... and you and your army eats! The Christian Sons will not be under you!

Your troops we are not afraid, and earth, and water will fight with you: you - Babylon cook, Macedonian wheelwright, brewer of Jerusalem, Alexandria Kozolup, larger and smaller Egypt swineherd,  Armenian pig, Tatar you quiver,  Kaminezk’s executioner, you are a thief Podolsky , grandson of the asp, and you all over the world and highlight the jester, and to our God, you're a fool, pig snout, pig ... ka, butcher’s dog, unbaptized fucking head ... mother, and you us ... Here's how you Cossacks replied, poor, shabby! You are not worth of our faithful Christians!

We do not count the years, the moon on the sky, the number of the calendar, the day we have the same as you, kiss ... us. "

Printing the text of a letter to the Sultan of the Cossacks, the historian M.Markevitch in a note added that he could not vouch for the accuracy and authenticity of the document, but sees fit to print in its history. M.Kostomarov also spoke vaguely: "It is hard to decide - he wrote – was there a letter or it was a fiction." Well-known historian of Cossacks D.Yavornitsky also did not express a clear idea about the “correspondence”. In the above-mentioned work of Ivan Sirko, he wrote that letter, may not be true, but it is made in the spirit of the Cossacks.

Only the Academician K.Harlamovich  in  his work "Correspondence Cossacks with the Sultan", published in 1923, for the first time clearly concluded that "Correspondence" is not a historical document. This letters  Sultan, as well as Cossacks  did not write out. The Cossacks although they had a hard temper and a sharp tongue, but in the letters, which are numerous, were diplomatic and spoke quite delicate and restrained, even in moments of anger. Letter of the Sultan and answer to it according  Harlamovich are the products of literary environment of the end of the XVII century.

It is not difficult to prove that this is the literary work and not a real document of that time diplomacy.

Firstly, written in such style letters Cossacks in foreign countries did not send. This is evidenced by published on the basis of archival materials Cossack letters different in content and dates. Second, if it was a document, it should not have so many versions, developed in the XVII century. Thirdly, there are many versions for different dates (1600, 1619, 1620, 1667, 1696, 1713 et al.). Fourth, there are various signatures: Ataman Zakharchenko, Ivan Sirko, or simply  Cossacks. Finally, in different ways different destinations: Osman, Ahmed III, Ahmet IV, Mahmud IV, etc. This once again confirms that it is not a diplomatic document, but the work of  Cossack creative clerks.