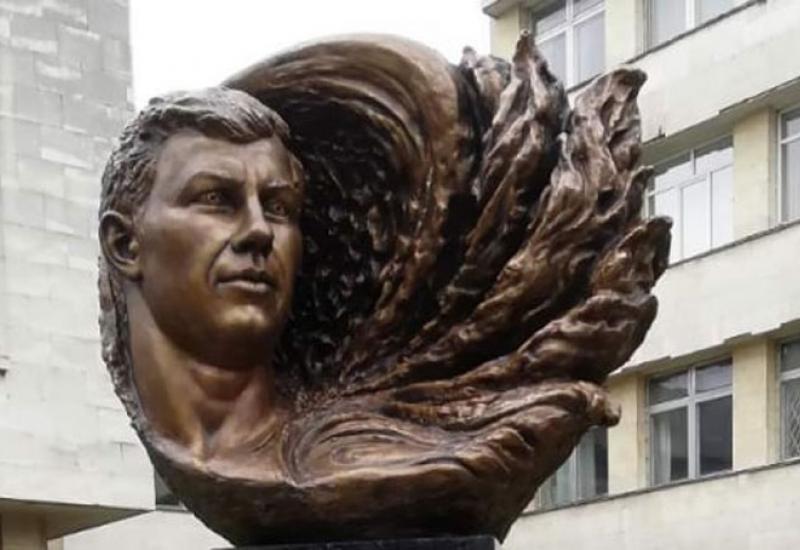 On the 35th anniversary of the catastrophe at the Chernobyl Nuclear Power Plant, Igor Sikorsky Kyiv Polytechnic Institute established a monument on its territory to one of the first hero-liquidators, a graduate of the Faculty of Electrical Engineering of Igor Sikorsky Kyiv Polytechnic Institute, Deputy Head of the electricity workshop of the Chernobyl NPP Oleksandr Lelechenko.

… Not only firefighters rushed to protect the Chernobyl NPP from even more damage - new explosions and fires - from the very first minutes. 23 plant workers without waiting for any orders stopped the further development and deepening of the accident at the cost of their lives. Deputy Head of the electricity workshop of the Chernobyl NPP Oleksandr Lelechenko was one of them. He was aware of the potential threat of such a turn of events could turn into a powerful hydrogen explosion. So, according to eyewitnesses, Lelechenko rushed to cut off the hydrogen, preventing its supply to one of the emergency generators in the engine room, which roof was already on fire. At that moment, the room radiation doses were from 5 to 15 thousand roentgen (R). Oleksandr Lelechenko received a deadly radiation dose. Barely holding back his vomiting, he reached the shower and suddenly learned that another generator was under the same threat. And someone else will have to go and risk there. So, he returned to the embrace of radiation …

Even though he was feeling ill, Lelechenko returned home only the next day after the disaster. His wife said that her husband's face was covered with red spots, she asked him to see a doctor. However, instead of going to the hospital, he was at the plant again a few hours later.  The power engineer was well aware of the risks and the insane radiation doses he received, when he stepped over graphite debris, kneeled in saturated radioactive water, and turned off heavy and non-rotating valves with his hands. Oleksandr realized the consequences and did not want his younger colleagues to risk. Indeed, it was both a conscious and heroic deed; he probably regarded it a duty, though…

I happened to be at the Chernobyl nuclear power plant more than once after the accident, even when the station did not stop its work. Some people knew and remembered Lelechenko… They told legends about him.

Even when doctors took him to the medical unit, he occasionally “went to smoke”… and returned to work. Then, it was the third time he warned of a dangerous flow of hydrogen ... Oleksandr Lelechenko worked at the station until April 30. He organized the power supply of equipment, fire extinguishing systems. He seemed to be invincible… But it was not true.

They say that the doctor who took him to the hospital was afraid that his patient would die in the ambulance. Oleksandr lived another week, though. He died of acute radiation sickness at Kyiv Hospital on May 7.

Firefighters Pravyk and Kibenok were still fighting for their lives in the sixth Moscow clinic. Operational managers, who worked a shift together that day, Akimov and Toptunov, were still suffering from agony while Lelechenko passed away. He became the third victim in an unequal battle with the peaceful atom when he received an unbelievable radiation dose of 2,500 R.

The first victim in the accident became Valery Ilyich Khodemchuk. He was a senior operator of group 7 of the main circulation pump of the 4th unit of the reactor workshop. Unfortunately, his body was never found.  People presume that he is entombed under the remains of the circulation pumps. The second was Volodymyr Shashenok, an engineer who worked for Atomenergonaladka in Smolensk. He came to the Chernobyl nuclear power plant to test reactor four. On the night of April 26, he was found unconscious under the debris of the reactor with his body severally broken and badly burned by radiation.  A few hours later, Volodymyr died in hospital.

The feat of the operational managers, who did not allow the catastrophe to grow into a nuclear apocalypse in the first hours after the accident, was not recognized for a long time. Oleksandr Lelechenko was posthumously awarded the title of Hero of Ukraine in 2006. He was awarded in independent Ukraine "for heroic deeds in the name of the life of present and future generations, personal courage, and self-sacrifice shown in the liquidation of the Chernobyl disaster".

‘The energy sector old-timers, which are representatives of several large Ukrainian energy companies and graduates of the faculty, initiated establishing a monument to Oleksandr Lelechenko’, said Rector of Igor Sikorsky Kyiv Polytechnic Institute, Academician of the NASU Michael Zgurovsky. The Academic Council of the University supported the proposal. We held a competition for the best project, whose winner became Honored Artist of Ukraine Anatoliy Valiyev. We could officially open the monument last year; the quarantine pandemic prevented us, though. This year we could not keep putting this business off. After all, we all got used to living under the quarantine restrictions.

… On a pedestal made of black labradorite, there is a bronze bust of Oleksandr Lelechenko. We recognize the open and courageous face of a man who chose to put the duty ahead of his own life. Deadly vortices of atomic flame erupt from his shoulders…

However, if you look closer, your imagination suggests another image. These vortices are like wings that fly a person during his great responsibility and life feat. Besides, the association with the surname comes to mind, ‘Take me, little storks on your wings’… Oleksandr Lelechenko dreamed of the sky since childhood. He even studied at the Kharkiv Military Flight School but was laid off due to a reduction in the army. Still fascinated with the sky, he entered the school of higher flight training of navigators-dispatchers for civil aviation… Suddenly, his mother fell ill and then died, so he had to leave school. He did not know that fate was preparing other trials for him. And he passed them with honor.

As Lina Kostenko said, ‘A human seems not to fly...But we have wings! And we can fly!’