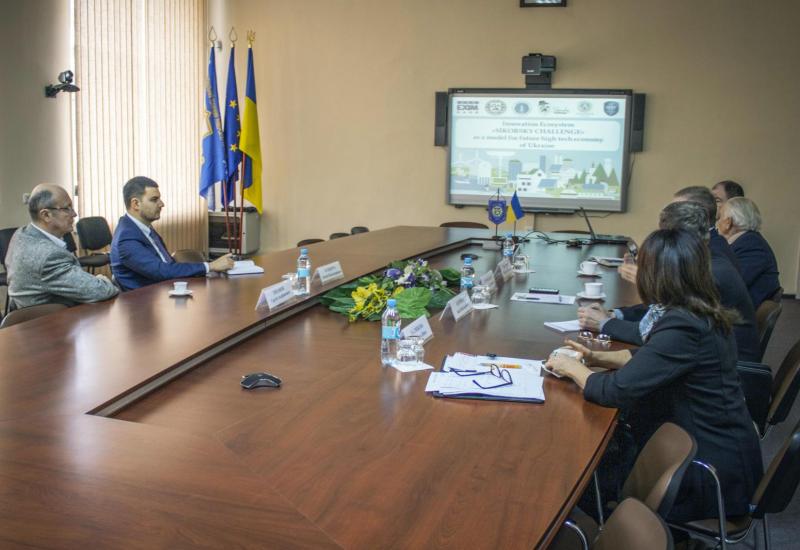 The newly-appointed general consulate of Ukraine in San-Francisco Dmytro Kushnir and the principal of the university and the academician of the National Academy of Sciences of Ukraine Michael Zgurovsky discussed different questions concerning the cooperation between Igor Sikorsky Kiev Polytechnic Institute and high-tech companies which are working in the Silicon Valley of California and other scientific and manufacturing centers of the west coastline of the United States of America.

Sergiy Tihonov, the representative of the Office of the President of Ukraine, Michael Ilchenko, the Head of the Academic Council of Igor Sikorsky Kiev Polytechnic Institute and the academician of the National Academy of Sciences of Ukraine, Ivan Korobko, the principal of the Institute of Aerospace Technologies, Yuriy Sydorenko, the Deputy Vice-rector for scientific work and Inna Maliukova, the principal of the educational and methodological complex «The Institute of Postgraduate Education» took part in the meeting.

Michael Zgurovsky told about the activities, structure and mission of the created innovational ecosystem in the university Sikorsky Challenge and startup schools with the same name, about the stages of their development and successful projects, in which the potential partners of the USA can be interested. While the persprectives of promoting the startup projects of polytechnic students overseas were being discussed, Dmytro Kushniruk announced about the importance of building the relations between the industries of Silicon Valley and the Ukrainian ones, and also the universities, which are the leaders of the innovational movement of the country, especially Igor Sikorsky Kiev Polytechnic Institute. That is why this question will be always taken into consideration.

The consular district, the center of which is San-Francisco, consists not only of Silicon Valley, but also of other scientific and manufacturing centers of the United States, where lots of world companies work. The answer to the question, considering the plans of cooperation with them, is given. Kushniruk said: «There we are also representing the opportunities of Igor Sikorsky Kiev Polytechnic Institute. Examples include the city of Seattle (Washington state) where different powerful corporations such as “Boeing” and others are situated. We are certainly improving the relationships with them. Besides, there we have a very honorary consulate led by a citizen of the USA».

One of the directions of the cooperation, in which both Igor Sikorsky Kiev Polytechnic Institute and the American innovational industries are interested, can be the realization of space projects. They are the part of a big space program of the university, which was represented by Michael Ilchenko during the meeting.

«Igor Sikorsky Kiev Polytechnic Institute has been promoting its startups around the world for a long time. Undeniably, the west coastline of the United States of America, Silicon Valley, companies which are situated around Stanford University and Stanford University itself are absolutely vital regions for Igor Sikorsky Kiev Polytechnic Institute. That is why the general consulate of Ukraine in San-Francisco is the exact important area where the best developments of scientists can be represented in the Silicon Valley, - Michael Zgurovsky concluded. – We are not starting everything from scratch, we have been working with this region so far, but because of new circumstances and new realities we would like to activate this process. And the help of the country, in particular the general consulate of Ukraine in San-Francisco, can be very vital and efficient».