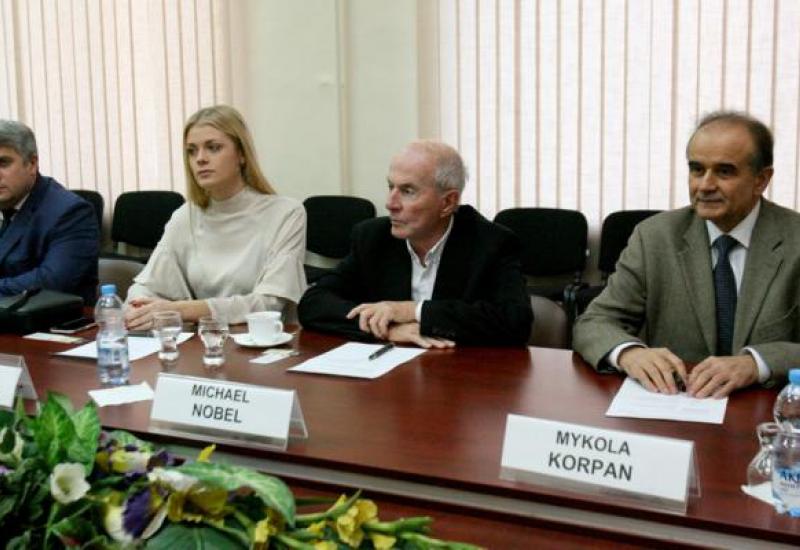 At the beginning of December Professor Michael Nobel, a member of the founder family of the most prestigious in the world Alfred Nobel Prize and President of the Nobel Sustainability Trust, visited Igor Sikorsky Kyiv Polytechnic Institute.

The famous Austrian surgeon with Ukrainian roots Mykola Korban, and the representative Wall Nordlander foundation were also guests of the university.

It will be recalled, that three years ago, the Nobel Foundation for Sustainable Development created a prize that will be awarded to developers of the best projects in the following areas:

That is, it should be projects aimed at creating mechanisms to strike a balance between meeting the modern needs of mankind and protecting the interests of future generations, including their need for a safe and healthy environment that is consistent with the concept of sustainable development.

This is Michael Nobel's second visit to KPI. The first one was in 2016. According to the results of the negotiations at that time, it was created the National Nomination Committee of Ukraine from Nobel Foundation prize of Sustainable Development based on the Igor Sikorsky Kyiv Polytechnic Institute. The Committee was headed by the President of the National Academy of Sciences of Ukraine, Borys Paton, and its members were rector of Igor Sikorsky Kyiv Polytechnic Institute, NASU Academician Mykhailo Zgurovsky, Vice-Rector of the KPI Corresponding Member of the NASU Serhiy Sydorenko, three more KPI representatives and leading scientists of a number of research institutions, all eleven well-known Ukrainian scientists whose research is relevant to the topic of sustainable development.

Therefore, the conversation that took place during the December 4 meeting concerned the work of this committee, as well as the projects submitted to the competition for the Nobel Foundation for Sustainable Development by Ukrainian researchers. “The nomination committee received several dozen interesting works. After their consideration, three of them, which most met the criteria were selected by the Foundation. And among the three, in turn, the committee members chose one project, which was forwarded to the International Committee of the Foundation, which was established and based on Oxford University, said Mykhailo Zgurovsky. It is very important that the work of the committee was clear and all scientists were able to see the selection process online and get the committee's appropriate explanations of why this decision was made».

By the way, the team of the project creators, which was nominated for the award, included scientists of Igor Sikorsky Kyiv Polytechnic Institute. It was devoted to developing a new metric, that is, a system for assessing the level of sustainable development of different countries and regions of the world, conducting a comparative analysis and offering some recommendations on how to deal with the challenges of mankind.

However, as it became clear during the conversation, the concept of the award and the criteria by which its winners will be determined, have changed. As Michael Nobel explained, this was because many theoretical works were put forward for the award. However, the Foundation believes that awards should be given to projects that are primarily practical, that is, to be aimed at creating real sustainable development mechanisms. According to him, searching for such works is the main task of the competition. Moreover, he offered Ukraine and, in particular, KPI participating in the expert support of the Foundation's activities and in the further evaluation of the works that will be submitted for the Sustainable Development Foundation award in the areas where our country has powerful scientific schools.

"We have asked Michael Nobel for sending us requirements for such activities," commented the results of the meeting, Mikhail Zgurovsky. Then we will study them carefully so that we can successfully and competently work on this global project."