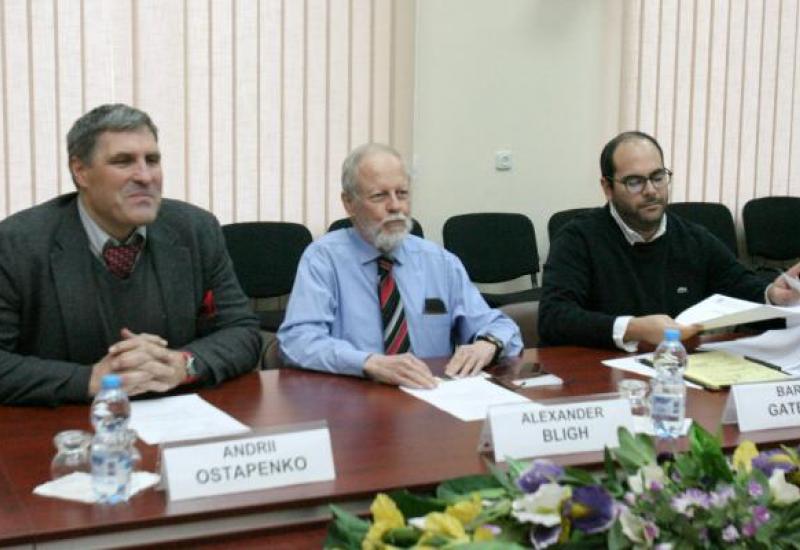 In the meeting, which was held on November 26, Andriy Ostapenko the Head of the Department of International Research programs and projects of the Main Directorate of Scientific and Technical Development of the Directorate of Science of the Ministry of Education and Science of Ukraine, Yuriy Yakimenko, the first pro-rector of the university and academician of the National Academy of Sciences of Ukraine, Evgeny Polishchuk, the Deputy Head of the International Cooperation Department of the Igor Sikorsky Kyiv Polytechnic Institute and Oleg Beletskiy who is the Director of Innovation and Technology Transfer Department took part, as well as many others.

“This is my first visit to Kyiv Polytechnic Institute, but not the first to polytechnic universities in general. I cooperate with the Israeli Technion and other technical universities in my country. I perfectly know that such universities are important centers of technical research and innovation. I believe that the cooperation of such centers is an important component of international partnership. After all, science has no boundaries! And together we can make our lives better,”- this is how Alexander Bly began his conversation with Ukrainian colleagues.

The restoration of broad scientific and technical cooperation is very important both for Ukraine and Israel, which, incidentally, is evidence of the first meeting Of The Ukrainian-Israeli Committee on scientific and technological cooperation which took place at the Ministry of Education and Science on the eve of November 25. However, Yuriy Yakimenko reminded the participants of the meeting that in Igor Sikorsky Kyiv Polytechnic Institute such cooperation wasn’t stopped. He emphasized that cooperation with Israeli scientists is always beneficial and interesting, and recalled some common projects. In addition, guests were shown a video about innovative activities in Igor Sikorsky Kyiv Polytechnic Institute.

A presentation by the Ministry of Science and Technology of the State of Israel was made by Alexander Bly. He said that this Ministry is a bridge between Israeli research organizations and industry. Its goal is to ensure quick implementation of the latest developments in production on the one hand, and to promote scientific research in promising directions on the other. What is more, the Ministry initiates the establishment of contacts related to the implementation of joint scientific projects, both at the level of the Government of Israel and the governments of other states as well as with international scientific organizations. Another aim is to determine priorities in supporting scientific programs. These priorities change slightly every year. The clear evidence of this is data on the fate of investments which the Ministry allocates to finance various research areas for 2019 and 2020. However, a significant part of the investment is still constantly directed to support projects related to the development of modern technologies. So nanotechnologies, researches in the field of artificial intelligence, nuclear physics, life science, etc. were among the priorities of 2019. Among the priorities of 2020 were robotics, medical equipment, new materials, quantum technologies, and others.

After the meeting, the guests got acquainted with the historical part of the university campus and examined the expositions of the State Polytechnic Museum at Igor Sikorsky Kyiv Polytechnic Institute.