To the 100th year from H.Denysenko`s birthday (video) 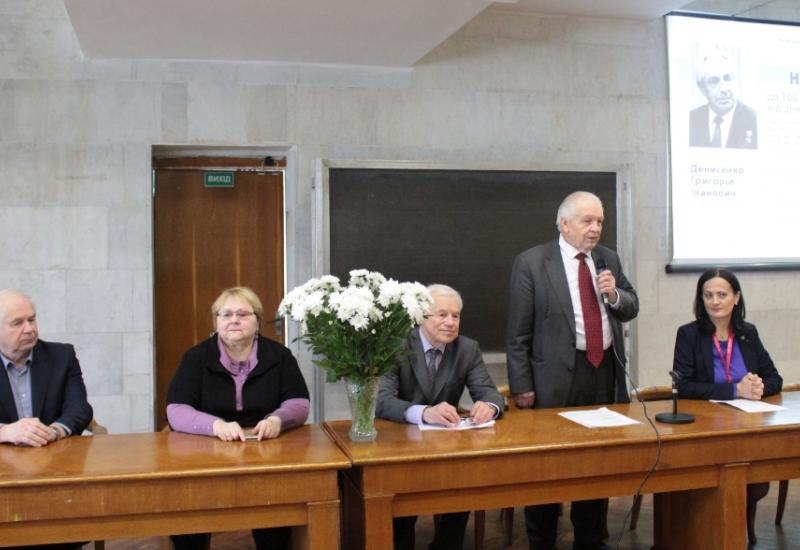 The scientific readings which is dedicated to the 100th year from the birthday of university`s rector (1971-1987) of H.I.Denysenko (1919 - 1998), was passing in 24th April in the Scientific and technical library of Igor Sikorsky Kyiv Polytechnic Institute, that carries his name.

In the meeting of round table were H.I.Denysenko`s members of his family -grandchild Natalia with her husband Valery and son Oleksandr, the first pro-rector of Igor Sikorsky Kyiv Polytechnic Institute Y.Yakymenko, pro-rector in the scientific work M.Ilchenco, representatives of departament of electroenergy and control system of the Lviv National Polytechnic University professor A.Malynovsky and docent G.Lysyak, rector of Kyiv National university of construction and architecture P.Kulikov, the member of NAS of Ukraine S.Kudrya, dean of the faculty of hydropower in the University of renewable energy P.Vasko, the director of National library named after H.I.Denysenko – O.Buruy, the director of Polytechnic library N.Pysarenko, the representatives of the University of electrodynamics, with which last ten years of H.Denysenko`s life was related and teachers and students of Igor Sikorsky Kyiv Polytechnic Institute.

“Years, when H.I.Denysenko was managing the Igor Sikorsky Kyiv Polytechnic Institute were very important. For those years our educational areas increased in three times. It is a base for our present activity. – Y.Yakymenko has said. – But H.Denysenko was a prominent teacher. Also, he created and introduced control system for polytech institute in 1974, that works till today…”

A fate did not looked after H.I.Denysenko: born in family of simple peasants in Kyiv, in 10`s years old age he became an orphan, grew in in the older brother`s family, then was directed to Chymkent, then went to Ukraine and entered to the Kharkiv electrical engineering institute. The studying was interrupted by the war. H.Deysenko went as a volunteer on front, but soon he was recalled and assigned as the teacher of military school in Samarkard. Then he taught at Higher military school, but was dreaming about ending his study at university in September 1946, already having experience of teaching work, he became the student of 4th course of Lviv Polytechnic Institute.

After the successful gaining degree of higher education H.Denysenko remained to work in this university, already in 1953 he defended the dissertation, and in 1963 – doctoral dissertation. In Lviv polytechnic he held the position of electrical engineering faculty, pro-rector in educational work, and from 1963 – its rector. He added a great amount of efforts to develop the institute: for creation and develop of complex of educational trunks and had an award from the Council of Ministers of the USSR. Without taking into account all his administrative work, in 1968 he was selected as the corresponding member of Academy of sciences of Ukraine in the specialty “Electric networks and systems”.

H.Denysenko died on Mays, 24, 1998, without a few months to the century of Igor Sikorsky Kyiv Polytechnic Institute.

A.Malynovsky and H.Lysyak presented the lecture about H.Denysenko`s activity. T.Devterova, a main scientist and secretary of Rector`s council of Kyiv institutions told about H.Denysenko`s work in the position of the head of Rector`s council in Kyiv institutions, and S.Kudrya presented the report “H.Denysenko – the founder of restorative energy”. P.Vasko who was H.Denysenko`s student and then postgraduate, share his memories about his mentor and teacher. Actually, practically all performers were memoirs about mentor, colleague and head, cause all performers were working with H.Denysenko for a long period of time.

In the end H.Denysenko grandchild Nataly thanked to all colleagues and students for their warm words.

M.Ilchenko made a conclusion of the round table, he not only generalized the information but also told about the years of his cooperation with H.Denysenko. “I think that the present and future generation of Kyiv polytechnics will remember H.Denysenko`s name with gratitude” – these words where the end of his speech.