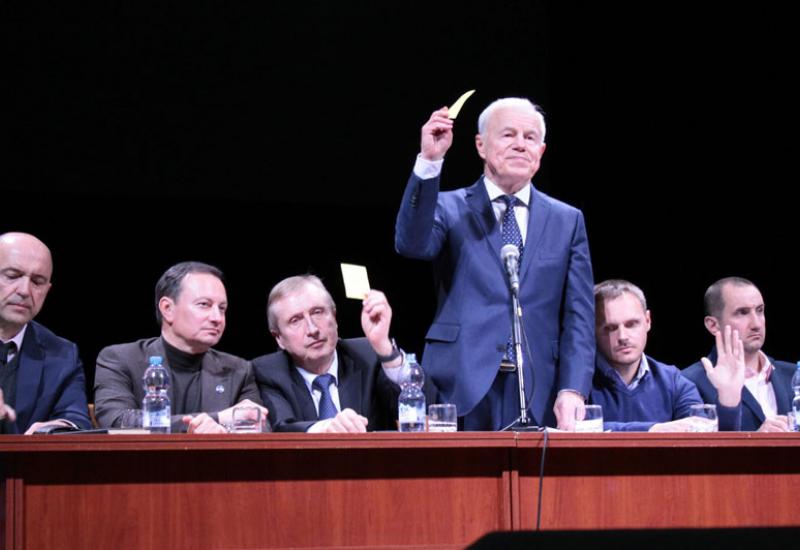 Igor Sikorsky Kyiv Polytechnic Institute workforce conference took place on 18th may 2019 in the culture and art Centre. It was opened by M.O. Besuhliy, acting chairman of the trade union committee. He said that 731 of 587 spokesmen have registered, the quorum is present and the work can be started.

Then, first academic director U.I.Yakymenko was the head of the conference. He gave a word to the chancellor. Since the term of the current contract of M.Z.Zhurovsky ends on 19th may 2019, he, according to the legislation, made a report of his and university administration work of last 7 years.
The chancellor has characterized the university achievements in all the main directions of its activity: educational work, scientific and innovative activity, perspective development projects, international liaisons, administrative and economic work.

After the end of reports, A.U. Havrushkevych, the vice-chancellor of educational work, P.O.Kyrytchok and authorized person of university internal audit, S.A.Oginsky, have answered the spokesmen’s questions. After that, the Chairman of the Kyiv City Organization of the Union of Education and Science workers of Ukraine, O.M.Yatsun’ has shortly reported about his activity.

The spokesme have also approved and found supportable the chancellor activity during the reporting period.

After that, at the request of the executive of the drafting commission of deputy chairman of workers trade union committee, O.I.Sheiko, the conference have reviewed and approved all sections of Solidarity Contract and Solidarity Agreement on period from april 2019 to april 2020 with editorial edits, proposed be the acting commission.

After, the spokesmen of conference have discussed proposals for candidates for the post of rector of our university.The information about discussion and labor groups nomination of applicants for the post of Igor Sikorsky Kyiv Polytechnic Institute chancellor gave the acting chairman of the trade union committee, M.O. Besuhliy. He reported that 127 session of departments, 17 conferences and labor collectives of departments and 7 academic institutes, 5 separated subdivisions, also workers and students trade unions have been completed. All this subdivisions put forwards one and the samke nominee – the acting chancellor M.Z.Zhurovsky. The Conference of the university labor collective also has to nominate a candidate for the position of chancellor.

After, MMI director, M.I.Bobyr’, dean of the IHF, Y.M.Panov, professor of the history department FSP, B.P.Kovalsky, the head of the organizational unit of the international co-operation department, A.V.Kovtun, chairman of the IHF student's bureau of the 2nd year student, V.I.Momot, the head of electronic engineering department , V.I.Tymofeev, the chairman of students trade union committee, A.U. Havrushkevych have spoken. All of them offered to nominate a candidature of M.Z.Zgurovsky to the post of chancellor of our university. The conference, almost unanimously (one abstained), have recommended to nominate M.Z.Zgurovsky as a contender for the post of chancellor of our university.

In the end, the conference has approved the composition of the Commission on Labor Disputes and Council on housing and social and household issues.