“Kremlin’s captives” film presentation and introduction to its characters 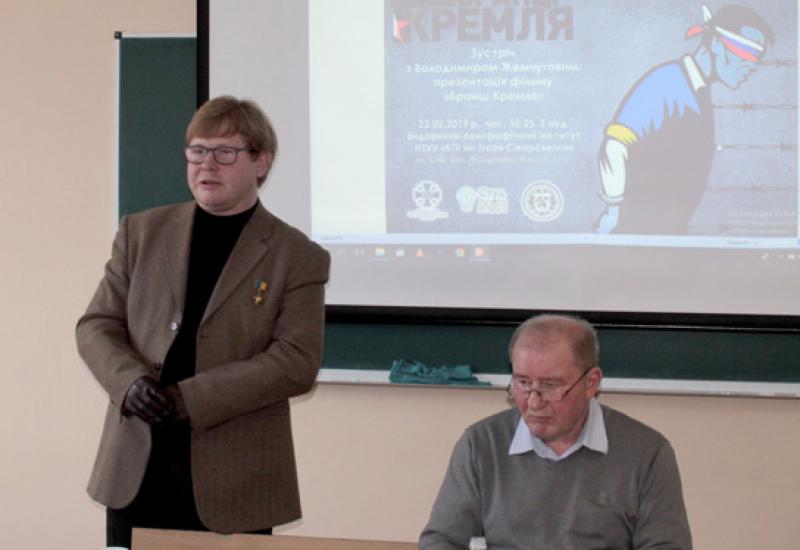 On January 22nd, people who have proved devotion to Ukraine and its independence with their own lives met students and professors of Institute of Publishing and Printing of Igor Sikorsky Kyiv Polytechnic Institute; these were Ilmi Umerov, the Ukrainian-Tatar politician, since 1991 is a permanent member of the Majilis of the Crimean Tatar people, the chairman of Bakhchysarai district state administration in 2005-2014 and Volodymyr Zhemchugov, the Hero of Ukraine, the Ukrainian partisan, and now the advisor to the Minister of Information Policy of Ukraine on issues relating to National-Patriotic Education of youth. The meeting was held within the framework of the educational project initiated by Ministry of Informational Policy and began with the demonstration of a fragment of the film “Kremlin’s captives” (2018), dedicated to political prisoners, Crimean Tatars, Ukrainians and citizens of other nationalities, who are illegally detained in Russian prisons, who no matter what remained Ukrainian patriots, being in territories temporarily occupied by Russia. Current university guests were also among its characters.

Ilmi Umerov started talking with students with a story about his people, whose number, together with the diaspora, is several million. About 300 thousand of these people live in the Crimea. By 1987, there was almost no Crimean Tatar population in the Crimea - in 1944 this people was deported. According to official figures, as a result of deportation, 46.2% of its representatives died within the first year and a half. The active process of returning the Crimean-Tatar people to its ancestral land began in the late 80's and early 90's of the twentieth century. From then on, the Crimean-Tatars in their masses were almost the greatest supporters of Ukrainian independence in Crimea. No wonder, after the appearance of the “green men” on the peninsula, representatives of the Crimean-Tatar people organized mass protests against the actions of the Russian army and the covens, which were arranged by pro-Russian representatives of the local population.  By the way, Ilmi Umerov, the only one of the 14 heads of district state administrations and 9 heads of centrally administrated cities of the Autonomous Republic of Crimea, disobeyed the invaders and didn’t admit the occupation authorities and that the Crimea was the territory of Russia. The invaders were not in debt, after some time he was arrested and sentenced to 2 years under the article “For public incitement to the violation of the territorial integrity of the Russian Federation”. And only due the personal agreement of the President of Turkey, Recep Tayyip Erdogan with Putin, Ilma Umerov, along with another Crimean-Tatar political prisoner, Akhtem Chigoz, were exchanged for two Russian killers who were in a Turkish prison for the murder of a Chechen journalist on territory of Turkey, according to Turkish media reports. However, as Ilmi Umerov told the audience that the text of the document, after which he and Akhtem Chigoz were released, was not given to them. It is significant that Russian sources didn’t report about the circumstances of the release of these two Crimean-Tatar politicians.

“Good afternoon, Ukrainians” – that’s how Volodymyr Zhemchugov, participant in the fighting on Donbas, the Hero of Ukraine, appealed to the audience at the beginning of his speech. Thus, according to his words, he always appeals to his listeners in Ukraine so they realize that they are Ukrainians in spite of their ethnic background and the region in which they live.

And then there was an interesting and long story about why a successful entrepreneur, Zhemchugov, who was born and educated in Luhansk, but lived in Georgia for many years, returned to his native town Krasnyi Luch after the beginning of the war in Donbass, organized a guerrilla forces and took up arms.

Volodymyr Zhemchugov talked about those who supported the separatists, and later the occupiers, and those who tried to resist them. The fact that dissent soon started turning up dead. “The scenario was one,” said Volodymyr Zhemchugov, “hands are tied with the tape behind the back and shot in the head. They were found in the forest plantations and near the roads. I realized that it’s late to bring people together to protests, which should be organized in order to protect themselves. Everyone knew who are for Ukraine, who are against…”

On May 2014, Russians began to cross the border of Ukraine from the part of Rostov region. Special targets and weapons were transported to the territory of the Lugansk region. Part of the weapons were handed over to the local marginals, later local police was disarmed. Robberies started “on an ideological basis”, so the separatists “fought against the supporters of Ukraine”. Every night, big vehicles loaded with automatic weapons and ammunition in Anthracite were coming from Russia.

The Russian “Kozachki” were distributing them to the miners, scaring them with the threat of a “banderivtsi” from Kyiv, who would probably kill children and women, and hysterically urging local men to oppose. However, thanks to that almost uncontrolled arms distribution, the partisans managed to get it. In addition, in a little while the newly-developed “defenders” of the Donetsk People's Republic and Luhansk People's Republic began to sell the weapons they received. “We bought Russian weapons and formed our guerilla groups,” said Volodymyr Zhemchugov.

He was engaged in intelligence and participated in 30 special operations to destroy military facilities and personnel of enemy units. But on September 29, 2015, he got injured on the minefield during a regular operation near the former military airfield in Lugansk, where occupants kept the equipment. Then there was a capture, a gangrene, an amputation of hands, a Federal Security Service interrogation, a stay in the cell with criminals of the Lugansk prison and, finally, on September 17, 2016, the exchange of two formers of The  Security Service of Ukraine, who betrayed Ukraine. And then - getting the title of the Hero of Ukraine and the Golden Star from the hands of President Petro Poroshenko, medical treatment abroad, partial restoration of vision and prosthetics of hands ...

Ilmi Umerov and Volodymyr Zhemchugov also answered the questions of the participants of the meeting. The questions were different, but it felt that there were no indifferent people among the audience. But some just couldn’t live without trying to provoke. All interested people were invited to the meeting, that’s why videoblogger Anatoliy Shariy, supporter of the pro-Russian, known for his anti-Ukrainian materials, came to the meeting. He began to ask Volodymyr Zhemchugov frankly-provocative questions, but received decent answers and after he felt the audience's negative mood, he left it before the end of the conversation.

The meeting lasted more than 2 hours. It ended with a talk about the particularities of the information warfare, which is one of the components of the hybrid war with Russia, which now Ukraine leads.