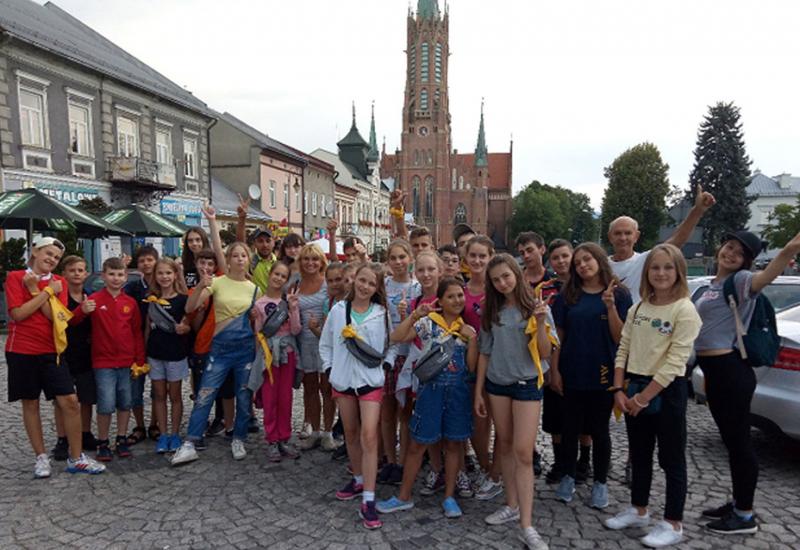 From 23 July to 3 August, 2018 a group of children of employees of the Igor Sikorsky Kyiv Polytechnic Institute from the age of 10 to 14 (on the picture) visited the Republic of Poland. This is the fifth consecutive summer camp, organized in scopes of cooperation between trade union organizations of the Kyiv and Warsaw Polytechnic.

This year's program was filled with lots of activities, both educational and cognitive, excursions, sports and entertainment events in Warsaw and Gribovo.

From July, 23 to July, 28, young polytechnicians were in Warsaw, where they enjoyed a panorama of the city from the observation place of the Palace of Culture and Science, visited the museums of the history of Polish Jews, Warsaw Prague, the Belvedere Palace and the Korolewskie Lazienki, listened to the interesting story of the Old and New Town, walked the evening city.

In the Museum of the History of Polish Jews, children became acquainted with the millennial history of the Jewish community in Poland, looked through interactive books, watched video materials, and felt as masters of the printing industry.

Belvedere Palace and the Korolewskie Lazienki, a palace and park complex of incredible beauty in the style of classicism made Great impression on everyone. The children visited excursions in the palace, walked through the cozy alleys of this complex, admired the architectural monuments, groomed plants, watched squirrels, peacocks, enjoyed coolness under the crowns of the trees on a hot summer day, listened to the singing of numerous birds.

Despite the rich excursion program, the children had a free time in Warsaw that was fun and active. In particular, a picnic, a walk and games in the park Pole Mokotowskie.

Young polytechnicians visited Warsaw Polytechnic. The children were impressed by the majesty and thoughtfulness of the architecture of the university's main building.  And they also talked to Professor Janusz Walo and his colleagues, they inquired about the peculiarities of studying in Poland and in Warsaw Polytechnic.

The second half of the stay in Poland was held in the city of Gribovo, located in the south of the country, on the river Byala among picturesque mountainous nature. This part of the rest can be called sports and recreation. Each day began with outdoor warming-up and was full of sports and logical games.

Staying in the Gribovo was also remembered as a climb to one of the surrounding mountains on which the yellow handkerchief of the Kiev Polytechnic was symbolically fastened. By doing this they showed that young polytechnicians have the strength and inspiration to conquer various peaks.

Children also received unforgettable impressions from the visit of the municipal poll in the town of Novy Sonch and the picturesque resort town of Krynica, where they took the cable car to the park-mountain zone (Park Mountain), walked through the cozy streets of the city and bought souvenirs.

The penultimate day in Poland was marked by a traditional friendly farewell fire, delicious dishes, an exchange of impressions, wishes and contacts.

I would like to thank the organizers and inspirational of this unforgettable trip from the Polish and Ukrainian sides, and say some words of gratitude to the rector of the Warsaw Polytechnic, the honorary doctor of the Igor Sikorsky Kyiv Polytechnic Institute Professor Jan Schmidt.