Meeting of the Verkhovna Rada Committee on Science and Education (video) 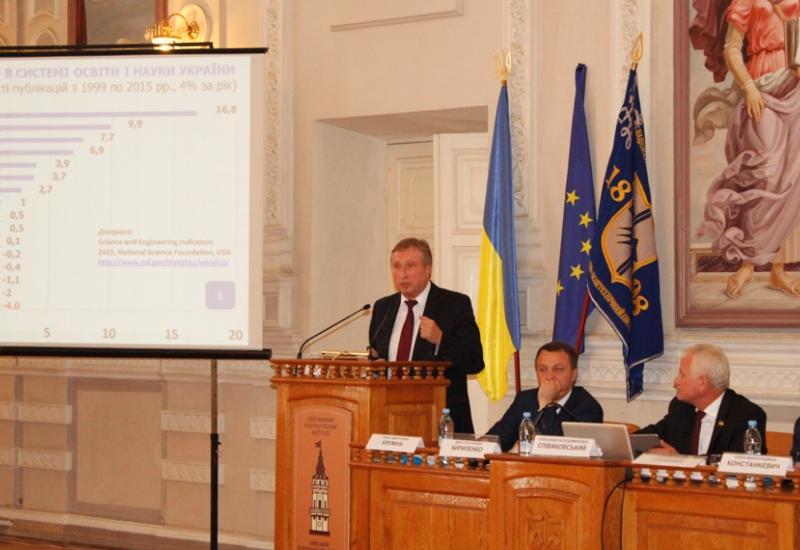 The meeting of the Verkhovna Rada Committee on Science and Education took place on June, 6 in the Hall of the Academic Council of the Igor Sikorsky KPI. Four issues were put to his agenda, most of which, of course, was the question “On Legislative Provision of the Development of Higher Technical Education in Ukraine”.

It was on this matter that the Minister of Education and Science of Ukraine, Lilia Grinevych, spoke at a meeting. She told participants about the real state of domestic higher technical education and the efforts of the government and its ministry to meet the needs of institutions of higher technical education, as well as the difficulties that occur in this, the impact of legal, demographic, economic and other factors on the quantitative and qualitative indicators of training specialists for the real economy and so on. And, of course, she made certain proposals regarding the legislative support of the work of technical universities. In particular, she drew the attention of the audience to the fact that there are gaps in the legislative field of Ukraine in the normalization of innovation activities, noting that the support of its technical support to the unrestricted commercialization of the results of scientific research of technical universities also depends on its legislative support. Therefore, according to Lilia Grinevych, the draft law on amendments to some legislative acts of Ukraine regarding the regulation of the activity of technological parks is currently under consideration by the parliament. She asked people's deputies to draw attention to it and support it. Lilia Grinevych also spoke about a number of instructions from the Prime Minister of Ukraine on special measures to support innovation and the preparation of a package of draft laws on technology transfer and invited the participants to participate in the development of these documents.

The invitation was not accidental, because at the meeting, in addition to the people's deputies of Ukraine and representatives of the ministry and scientific institutions, rectors of institutions of higher technical education from all over Ukraine took part. And the problems of implementing the results of the work of university scientific schools are very important for them. Moreover, as Liliya Grinevych emphasized, “technical education is impossible without science and innovation, otherwise it remains detached from the realities of time and the real needs of life ...”.

Rector of the Igor Sikorsky KPI, the Academician of the National Academy of Sciences of Ukraine Michael Zgurovskyi also spoke about the science and innovation activity in the technical universities and the importance of this activity for the development of the country's economy. He illustrated his report with Foresight's data on Ukraine's economy for medium-term (until 2020) and long-term (until 2030) time horizons. The research, among other things, analyzed the impact on the state's further development of the problems of domestic STEM education (from the English STEM: S - science, T - technology, E - engineering, M - mathematics) and the real state of human capital in Ukraine, primarily from the point of view qualitative indicators of the level of training of specialists. However, in his report, Michael Zgurovskyi spoke not only about the statement of facts, but also about the definition of tools and proposals on the actions of the authorities, aimed at improving the training of specialists for the real economy of Ukraine in certain time horizons. Among them were providing basic support to Ukrainian schools of science and education, deepening international cooperation, improving the system of admission to higher education institutions, creating an attractive innovation climate in the educational and scientific environment of the country, implementing the policy of innovative activity of the higher educational establishments, reviving vocational education, etc.

Academician-secretary of the higher education department of the National Academy of Pedagogical Sciences of Ukraine Petro Saukh, deputy chairman of the SP Korolyov OJSC “Meridian”, Oleg Prysyazhnyuk, rector of the National University “Lviv Polytechnic” Yuriy Bobalo, rector of the National Technical University “Kharkiv Polytechnic Institute” Yevhen Sokol, rector of Ivano-Frankivsk National Technical University Yevstahi Kryzhanivskyi University of Oil and Gas and others spoke on issues with their own thoughts on urgent problems of higher technical education that require an early resolution..
“The issue we are considering today is not only a problem of higher technical education. It is not even a engineering science problem. This is a problem for the scenario of Ukraine's development, - said at the summing up of the discussion Oleksandr Spivakovskyi, the first deputy chairman of the Verkhovna Rada Committee on Science and Education, whether this is a scenario for the development of a high-tech country, or - a scenario of the creation of a state that will never be among the world's leaders ....”. Therefore, the draft decision submitted to the participants reflected the vision of the most effective strategy for the development of the Ukrainian Higher Technical School, taking into account today's realities and identifying the necessary measures. This decision was taken unanimously.

Support for the provisions of the document placed on the agenda on the second place was not so unanimous – “Draft Law on Amendments to the Law of Ukraine” On Higher Education” on the change of the system of management of institutions of higher education” (Reg. No. 8385 dated May 18, 2018). It was about expanding the autonomy of universities and the powers of their supervisory councils. Of course, none of the participants of the meeting did not oppose the improvement of the model of university management, in particular, the expansion of their rights to manage their own financial resources, but some of the novels of the bill aroused concerns both from people's deputies and from rectors. However, it was decided to make this bill for the first reading in the Verkhovna Rada's hall, with the further elaboration of the second reading in accordance with its Rules of Procedure.

The third and fourth issues of the agenda did not deal directly with the problems of higher education. After some discussions, they were voted and will continue to be considered at plenary sessions of the Verkhovna Rada.

“This was a difficult meeting of the Committee,” Alexander Spivakovskyi concluded closing the meeting, “but we have once again shown that together we are able to overcome any difficulties”.

In the photo: the rector of the Igor Sikorsky KPI, the Academician of the National Academy of Sciences of Ukraine Michael Zgurovskyi is giving his speech