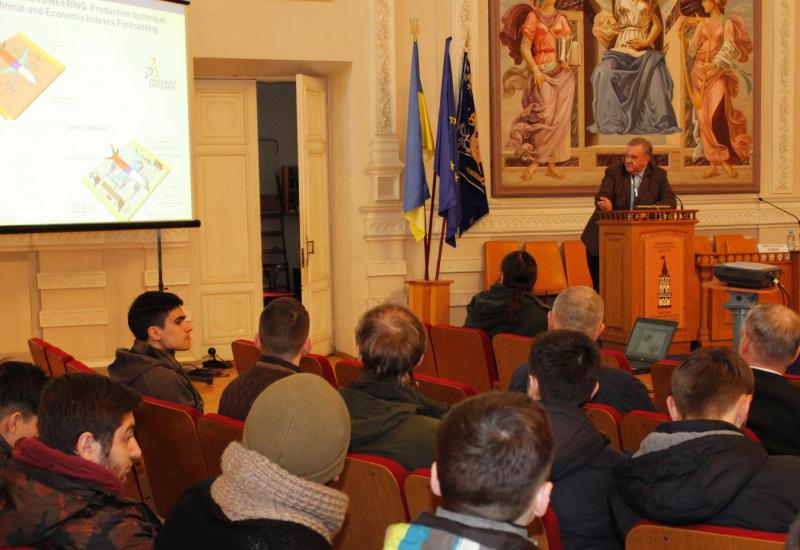 The lecture was organized as a master class within the framework of the All-Ukrainian Student Olympiad on the academic discipline “Programming of digitally-controlled processing tools” with the assistance and support of the “Progresstech-Ukraine” company. The majority of present were students and employees of the Mechanical Engineering Institute. The lecture was given by a representative of the corporation “Boeing” himself because on the basis of the university there are 2 Joint Educational and Scientific Centers of the Igor Sikorsky KPI and Boeing and Progresstech-Ukraine t.a. S.P.Timoshenko. One of them prepares future designer engineers for the aviation industry, in the second – the experts on strength. Therefore, potential employees of Boeing and Progrestech-Ukraine companies are studying here, a significant part of who is being engaged in the implementation of the projects of the Boeing Engineering Center, opened in 2015, and other corporate divisions.

The meeting of Oleksandr Borodkin with students of the KPI was devoted to the professional issues of the technology of manufacturing units of civil aircraft and their assembly, as well as those innovations that were being introduced at the enterprises of the concern in order to improve their quality. However, at the beginning of the lecture, he noticed that now, no one, even the largest and most famous aviation company, does not work on technologies developed by only its units and employees. “Today special companies-integrators who accompany the project from the very beginning to the end are engaged in the process” – he said. – These companies, in turn, not only work themselves, but also bring together dozens of machine-tool, metrological and other companies. “This is the fundamental difference between modern aircraft construction and what was earlier”.

Oleksandr Borodkin also described the stages of implementation of large-scale projects, resources, tools and the latest information-measuring technologies, robotic systems, etc., which are used in this process, and also told about the peculiarities of approaches to the process of assembly of passenger aircraft, which are now implemented at the leading aviation enterprises of the world, and of course, first of all they are implemented at the enterprises of the corporation “Boeing” He touched on a relatively new corporation policy concerning the creation of their own engineering service companies (or centers) on different continents and in different countries. They carry out part of the design work simultaneously with those performed at the enterprises of the company in different parts of the world. This is a modern approach that has become possible through the development of modern information technologies including.

The final part of the lecture was devoted to the issues of system engineering and its significance for organizing the construction of a modern aircraft.

Finally, Olexander Borodkin answered the questions of the present, both of a purely technical nature and with respect to the philosophy of further development of the industry.